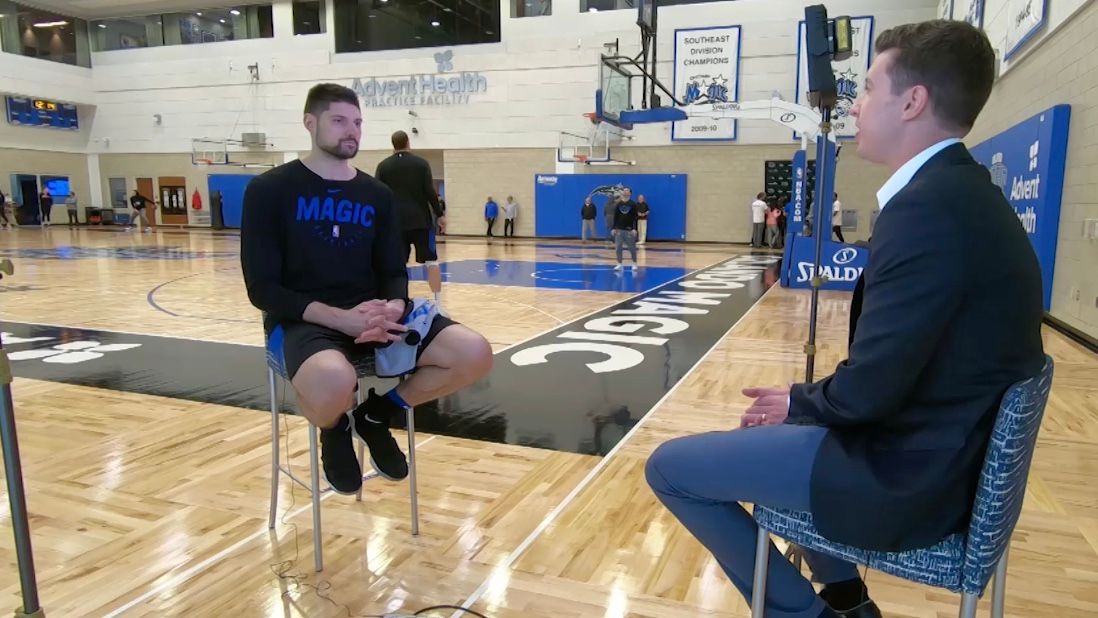 To say Nikola Vucevic is having a career year would be an understatement.  He’s having one of the best years of his life.

There’s the career highs in points (20.7) rebounds (12.1) and assists (3.9).  There’s becoming a first time All-Star.  An accomplishment even more significant considering he’s just the eighth in franchise history and first since Dwight Howard.  He’s also attempting to do something else the Magic haven’t done since Howard.  Make the playoffs.

“It’s a great opportunity for this franchise we had a couple tough years when things didn’t go our way,” Vucevic says.  “So if we could make it this year it would be huge. Nobody expected us to do it we always had belief that we could do it, that we had enough and I think we’ve shown it.”

Before the season the Magic were projected to win just 31 games by Las Vegas, a total they’ve already surpassed.  The team had just drafted for the sixth straight year in the lottery taking Vucevic’s assumed heir, Texas center Mo Bamba.  Vucevic insists the team’s decision to draft Bamba isn’t the reason for his career season.  He gives the credit to head coach Steve Clifford.

“To me the biggest impact was coach Cliff,” Vucevic says.  “The one thing he’s done great is using me inside and out.  Give me an opportunity to really use my skills.”

As great as his basketball season has been, his family might be his greatest accomplishment.  Vucevic and his wife celebrated the birth of their first child Filip in December.

“It’s been amazing seeing him every day when I come back home from practice or games you forget about everything and enjoy the moments with him.”

“It was really a great experience,” Vucevic says.  “I’m glad that my family was able to go there.  My son, my wife…his first game was the All-Star game although he was asleep for most of it.”

For a guy born in Switzerland, that’s traveled and lived all over the world.  Orlando has become a home for the man affectionally known as “Vooch”.  But after seven seasons with the Magic Vucevic will become a free agent.  A process he hopes he’s experiencing after a playoff run.

“I really haven’t thought about it too much yet, especially now with the last stretch of the season being very important to us,” Vucevic says.  “When the time comes I’ll see what’s out there, the opportunities that I have and look at them all and decide what’s best for me, my career and also my family.  I’ve never been in that position so when the season ends hopefully that will be after the playoffs and I’ll sit down with my family, my agency and go through the whole process and see.”

In a league where seemingly every contender has a disgruntled super star.  Vucevic has kept very quiet about his impending free agency.  While he acknowledges that player empowerment is a trend, he says it’s hard to judge other players situations from the outside.

“You never really know with a player and why he made certain decisions,” Vucevic says.  “We never know the true story behind it maybe there was some disagreement.  I think the most unfortunate thing is things leak nowadays.  I feel like if a player is unhappy in a certain situation and he goes to the team and tells them and it keeps a secret it wouldn’t be that big of a deal, but nowadays everything leaks.”

Vucevic’s future in Orlando is a two-way street.  He has to decide he wants to stay and the team has to decide they want to pay him what he believes he’s worth.  A complicated decision given the team just spent the 6th overall pick on Mo Bamba.  Regardless Vucevic is happy with the direction of the franchise, especially with Steve Clifford as the head coach.

“I like where we are going,” Vucevic says.  “I think the best thing that the front office did was bringing in coach Cliff.  Someone that’s tough minded, someone that knows exactly what he wants of players that’s very organized.  I mean the whole coaching staff you can just see how tight they are how very well organized they are.  They are all on the same page and I think that translates to the players.”

“Aaron Gordon he’s only twenty two and he’s one of our best players he has so many more years in front of him he’s only going to get better,” Vucevic says.  “Obviously Mo Bamba, [Jonathan] Isaac those guys have been great.  Mo had a couple injuries this year so he hasn’t had a chance to perform like he wanted to, he’s young as well.  So I think we have some good pieces here that can be interesting for the future.”