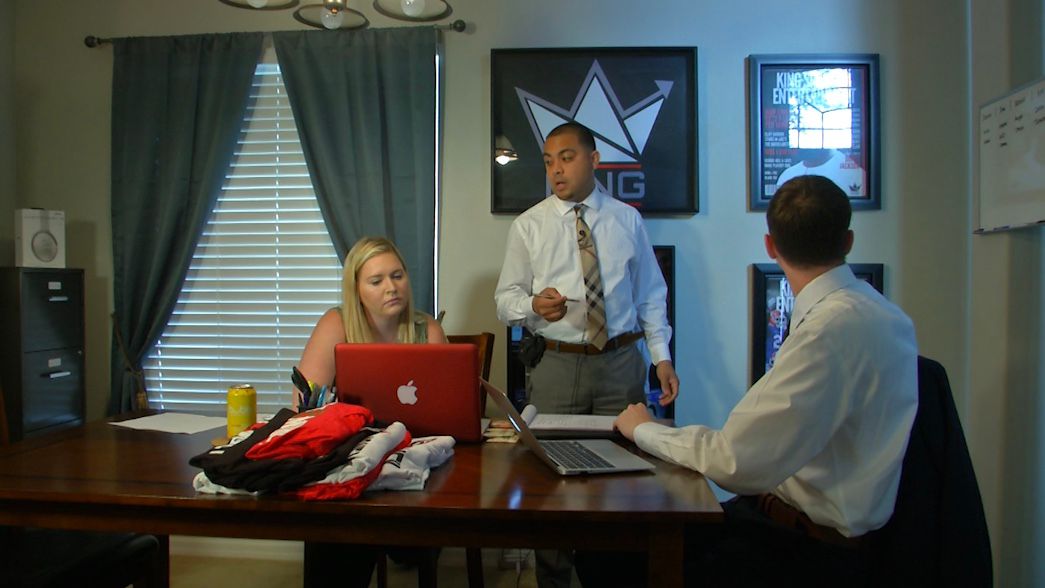 It’s game time for Clint Reyes.  His home office is his arena.

Reyes is at his desk at his home in Osceola county.  On the other line is Johnathan Abram, one of the top safety prospects in this years NFL Draft.

“When do you report to Indy?” Reyes asks.

Abram is preparing for the NFL combine.  For a sports marketing agent like Reyes, It’s the busiest time of the year.

“This time of year for me, the best word is hectic.  It’s that pre-draft time when the guys have just left school,” he says.

Clint handles endorsements, media and image for clients in the NFL and NBA.

“You’re in that discussion now as one of the top safeties that’s going to come off the board,” Reyes says as he continues his conversation with Abram.

He’s currently trying to set up a live TV appearance.  After he hangs up with Abram he calls the NFL Network.

“I would want him and Clelin Ferrell from Clemson to come and do some of the live shows.  Do you think we can pull that off?” Reyes says to the producer.

Clelin Ferrell is one of the top pass rushers in this year’s class.  Reyes has nine clients hoping to get drafted.  Another one is Ferrell’s teammate Trayvon Mullen.  The defensive back that won defensive MVP in the National Championship. Reyes calls him next.

“Yeah it’s an eleven I probably need an eleven and a half or twelve,” Mullen answers.

Mullen is trying to figure out which cleat to where for the forty yard dash at the NFL combine.  All in a days work at King Sports and Entertainment.  That’s the agency Reyes founded.

“It can be annoying to get a phone call at 2:00am but at the end of the day I wouldn’t change it for the world,” Reyes says.

He runs the business with his wife Jennifer out of their home and an office in Celebration, FL.  Believe it or not it all started in his high school closet.

“Every day I would come home from high school I would go into my bedroom, push my clothes to the side and work on my goals.”

From there Clint studied business at UCF.  He got his first break working at a rental car service.

“I met a player and I took my business card out and said you call me if you need anything,” Reyes remembers.

And a sports agent was born, well almost.

He slowly built up his network and his reputation while juggling his full-time car rental service job.  He eventually started working at an agency.  He found he preferred the off field endorsement and image side better than contracts. Two years ago he started King.  A dream over a decade in the making.

“My last name Reyes in Spanish that means King so that’s how my company came about.”

From humble beginnings Reyes is ready to take his throne.

“I see us eventually expanding into other sports,” Reyes says.  “I look at a lot of other competitors in this business.  I look at what they do.  I look at the multiple locations that they have.  I look at the fact that they are outside of North America.  I ask myself why can’t that be me?”