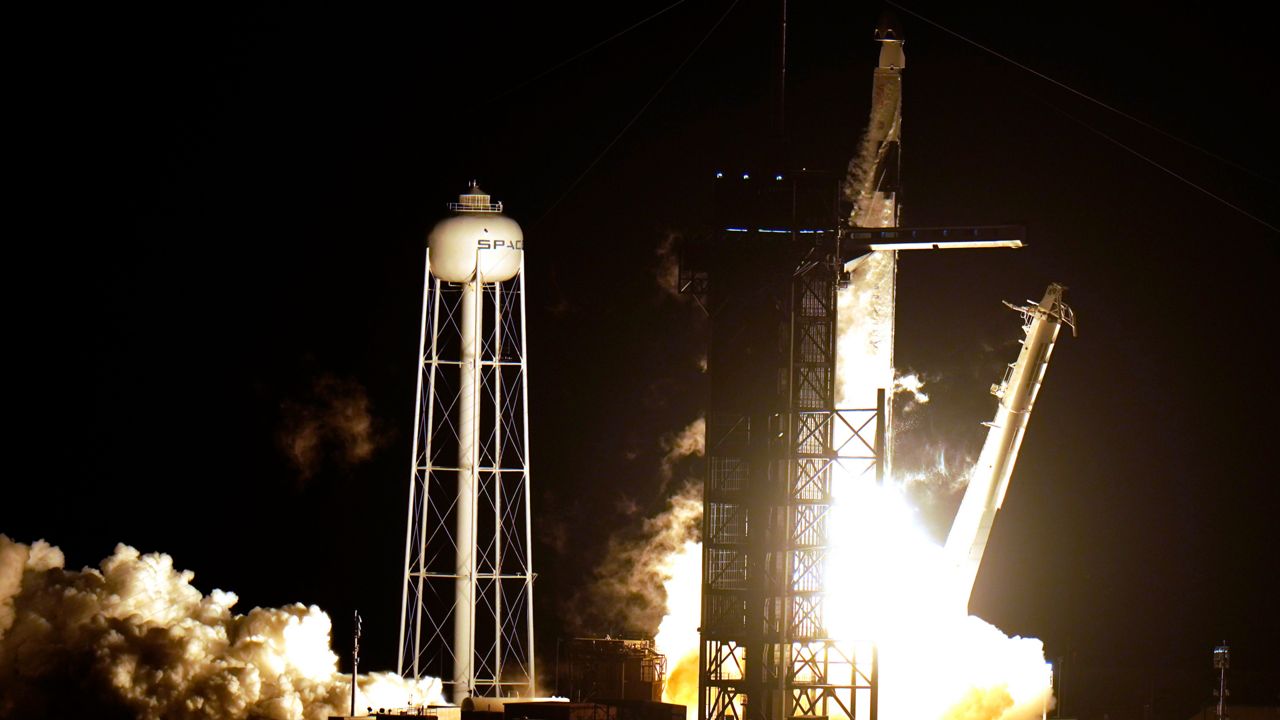 A Falcon 9 rocket with Crew Dragon capsule on top lifts off from Launch Pad 39A at Kennedy Space Center, Florida on Sunday evening with 4 astronauts aboard. (John Raoux/AP)

The Falcon 9 rocket launched at 7:27 p.m. ET from historic Launch Pad 39A, from where space shuttles once took off, and next to SpaceX's facility on Florida's Space Coast.

The @SpaceX #Crew1 took off right on time as the historic launch is taking four astronauts to the @Space_Station.

Get the latest here. https://t.co/En5HOuoMOH

Overnight, NASA tweeted that engineers were looking into an issue with the propellant heaters that heat the fuel aboard the Crew Dragon.

About an hour and a half later they tweeted this saying the heaters are functioning properly and the crew was safe the whole time.

#LaunchAmerica Update: @SpaceX confirms the propellant heaters are functioning properly with no issues. Crew-1 continues its journey to the @Space_Station. Stay tuned to https://t.co/z1RgZwyJyi for the latest info. pic.twitter.com/9LJYky987j

SpaceX has contracted with NASA to set a commercial crew program in motion. The private space company founded by billionaire Elon Musk has been ferrying supplies and cargo to the ISS for several years. Boeing is also under contract with NASA to develop a crew capsule. Its ship, called Starliner, has had one uncrewed test mission that was supposed see it dock with the ISS, but it did not go well. Another test mission is planned.

Musk himself watched the action from afar. He tweeted that he "most likely"' had a moderate case of COVID-19. NASA policy at Kennedy Space Center requires anyone testing positive for coronavirus to quarantine and remain isolated.

Meanwhile, Sunday's launch is the first official Commercial Crew Program rotation for SpaceX and NASA, though it's the second SpaceX-NASA joint crewed launch. Last May, SpaceX delivered astronauts Bob Behnken and Dough Hurley to the ISS on a test flight called Demo-2.

Once that mission cleared without any major hitches, Crew-1 was scheduled. It was initially set to lift off Halloween night but was pushed first to Saturday night and then Sunday night due to onshore winds that would affect recovery operations, according to NASA Administrator Jim Bridenstine.

Just landed in Cape Canaveral with @SecondLady! We are ready to watch @Astro_illini, @AstroVicGlover, Shannon Walker, & @Astro_Soichi lift off for the @Space_Station!

Astronauts Michael Hopkins, Victor Glover, Shannon Walker and Soichi Noguchi from the Japan Aerospace Exploration Agency are aboard the Crew Dragon capsule for Crew-1. The flight to the ISS is automated, but they can take control if needed. They're due to arrive at the ISS late Monday night and are expected to stay there for six months.

“One of my favorite things about (Crew Dragon) is it has four seats, and it’s going to get four of us to the International Space Station. I’m really looking forward to that,” Glover said.

The Crew-1 mission drew tens of thousands to the Space Coast on Sunday, in and around Titusville and at the beaches, hoping to catch a glimpse of the night launch. And that even included a visit from Vice President Mike Pence and second lady Karen Pence to see history.

David Hernly said he came out to the A. Max Brewer Bridge in Titusville. He said it's his hobby to take pictures of launches, which he's done since space shuttles launched from Kennedy Space Center.

“Anything to do with space, I’m always out here. I always wanted to be an astronaut or a heart surgeon. But things change in life… I like to come out here with my camera setup,” the Melbourne resident said.

Hernly said he's been impressed with how the space industry has grown in the past couple of years.

Juliet Rich said she'd turned out to fish but was pleasantly surprised to find out there was a launch.

“It started out as a fishing trip, and it looks like it turns into a trip where we will actually see a launch tonight,” the Orlando resident said with a fishing pole in her hands.

SpaceX hopes that this will be one of many crew rotations for NASA to the ISS. It recovered the first-stage booster rocket on its drone ship hundreds of miles out in the Atlantic, which it intends to reuse for Crew-2, scheduled for this spring with four more astronauts.

At Cocoa Beach Pier on Sunday afternoon, most spectators were spread out and weren't gathering in large groups. Some were wearing masks, some not.

Instead of COVID-19, their concerns were more focused on the economy and the potential boost in tourism and money for Florida's Space Coast.

#UPDATE: People are spread out pretty far...practicing social distancing here at the Cocoa Beach Pier ahead of the crewed 🚀 launch planned for today. @MyNews13 @MyNews13 pic.twitter.com/sHgrUYMAcc

“It's going to be amazing. It's bringing a lot of people here, and they are spending a lot of money, and it's going to keep our economy going,” said Taylor Martin, who was at Cocoa Beach to watch the launch.

Typically these crewed launches bring in millions of dollars for the local economy, in tourism dollars and jobs.

Brevard County Sheriff Wayne Ivey earlier this week encouraged people to wear masks if the situation calls for it and to also practice social distancing.

At the A. Max Brewer Bridge in Titusville, a popular launch viewing spot, spectators brought tents, chairs, and cameras, while a live band played nearby.

Many got up early, some at the crack of dawn, to stake a claim to a prime viewing spot.

Deborah Tummino drove up from West Palm Beach this morning. She says she tries to see as many launches as she can.

“If it does not go off because of the safety, that is paramount. We want to make sure the astronauts that are going up remain safe and everything goes according to plan so I hope it goes off," she said. "Like I said, it is exciting, to feel it, to feel it burn, the vibrations, and to hear the sound barrier breaking, and the sonic boom afterward is very exciting.”

The Florida Highway Patrol estimated there were 200,000 spectators along the Space Coast, trying to catch a glimpse of history on a breezy Sunday night.

Russian Soyuz spacecraft routinely carry three people to space, but SpaceX's Crew Dragon is designed to carry up to seven.

“It doesn’t sound like a lot. You’re adding just one more person that what we normally have up there, but having one person increases our ability to work much more,” Walker said.

Once on board the ISS, the Crew-1 team will join a NASA astronaut and two cosmonauts to begin research and science experiments that can only be performed in space.

NASA thinks the additional members will double the amount of research that can be conducted in microgravity.

“I think some of the advantages is you’ll have crew that can carry out the science and experiments... If something breaks on station, you don’t have to stop," Walker told Spectrum News. "You’ve got other crew that can deal with the maintenance or basic day-to-day of the station life.

“So we’ll all be doing everything, but together we can just accomplish so much more while we’re there.”

The Crew-1 team is scheduled to stay aboard the ISS for six months. This spring, the next four astronauts will launch from Florida's Space Coast as a part of the Crew-2 mission. SpaceX is planning to reuse the first-stage booster from Crew-1 on the Crew-2 mission.

Crew-1 is the first operational crewed mission for NASA's Commercial Crew Program and the beginning of privatizing low-Earth orbit. NASA has been working with commercial companies such as SpaceX and Boeing to make that happen.

The goal is for the space agency to become a customer rather than a launch provider.​

On Friday morning at Kennedy Space Center, NASA Administrator Jim Bridenstine and other officials outlined the commercial crew program, which is expected to bring more access to space than ever before.

There have been dozens of commercial resupply missions to the ISS through NASA's commercial space partnership, with uncrewed capsules transporting supplies and equipment to astronauts and cosmonauts aboard. Those crews previously relied on Soyuz spacecraft to get there.

That is, until May, when SpaceX's Demo-2 test flight saw the first pair of NASA astronauts ferried up to the ISS on a Crew Dragon capsule and the first to blast off from U.S. soil since the end of the space shuttle program a decade ago.

"The next big phase is commercial space stations themselves, where we have private capital, and NASA as a customer as well, that's ultimately capitalizing, funding forward, for this new era of human spaceflight," Bridenstine said.

The FAA has overseen launches for decades, but Sunday's planned launch is the first crewed spaceflight for that agency. In fact, once space tourism takes flight, the FAA will likely license more than 100 space operations a year.

Information from the Associated Press was used in this story.