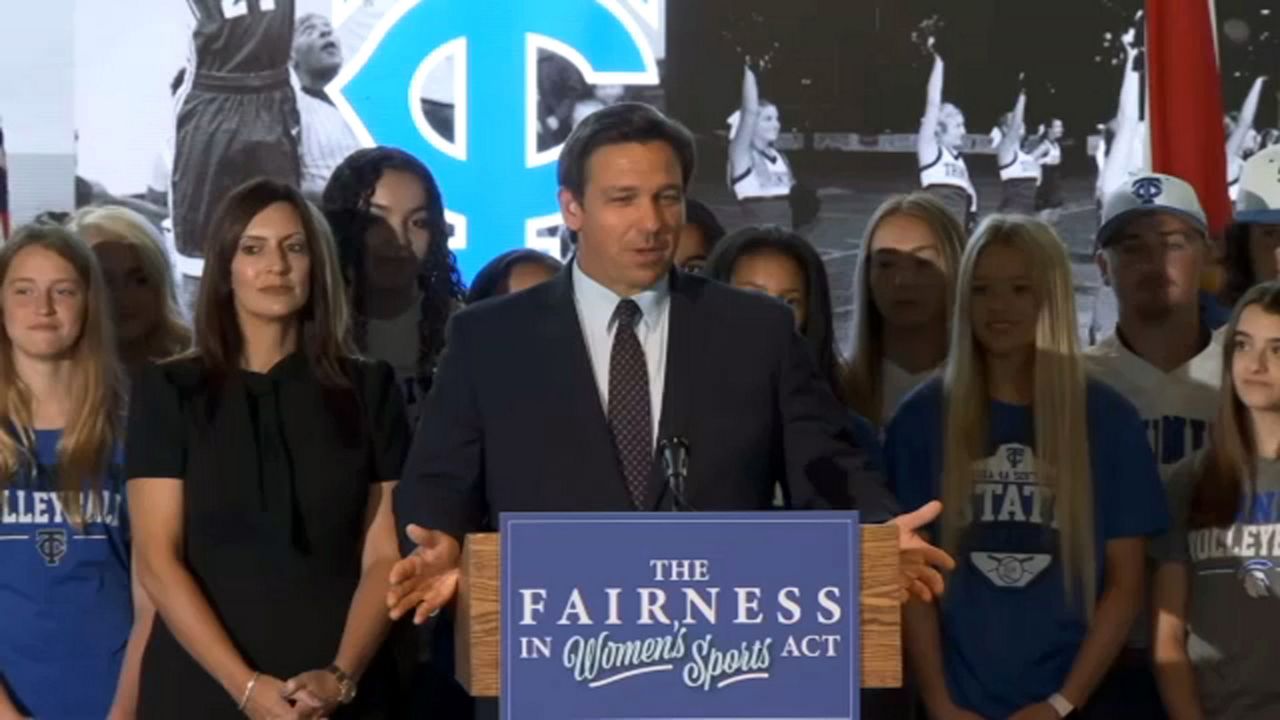 Gov. DeSantis speaks during the signing of a bill that includes a ban on transgender students in womens' and girls' sports. (Spectrum News)

JACKSONVILLE, Fla. — A bill that includes a ban on transgender students from taking part in womens' and girls' sports is now a law.

Gov. DeSantis signed SB 1028 into law on Tuesday in Jacksonville, a bill with several provisions for charter schools, including making it easier for them to qualify for state capital outlay funding, allowing state universities an the Florida college system to sponsor charter schools, and allowing charter schools to establish career academies.

Tucked into the bill was the transgender sports ban, dubbed the "Fairness in Women’s Sports Act". The ban was originally a standalone bill. After the bill was killed during the legislative session, however, Republicans resurrected it as an amendment in the charter school bill just before the session ended.

Florida is now the seventh state in the country to pass legislation targeting transgender athletes. The signing sparked outrage among Democrats and LGBTQ advocates, and two organizations — Equality Florida and the Human Rights Campaign — have already announced that they will go to court to attempt to block the legislation which officially becomes law on July 1.

“In Florida, girls are going to play girls sports, and boys are going to play boys sports,” the governor said at the bill signing and news conference. He was joined by a girl's softball team at Trinity Christian Academy and had a "Fairness in Women's Sports Act" sign on his podium.

Among the athletes with the governor on Tuesday was Selina Soule, a Connecticut resident who was one of four female high school athletes who claimed that the Nutmeg state’s policy of allowing students to compete in sports based on gender identity deprived them of fair competition due to the participation of two transgender athletes (that lawsuit was dismissed earlier this year by a federal judge, because the two transgender athletes had both graduated from high school, making the case moot).

“Sports have always had separate rules to ensure fairness,” Soule said. “Everyone should have the chance to participate in sports, but they need to compete where it’s most fair. This isn’t about self-expression. This is about our right — a women’s right to win.”

The governor’s signing was applauded by social conservatives like John Stemberger from the Florida Family Policy Council, who said in a statement, “Young people who are experiencing gender dysphoria need our care, counseling, and help. They do not need to be affirmed in a psychological disorder which can directly jeopardize their health & even their life. We need to protect children and not encourage irreversible risky procedures like double mastectomies, gender mutilation and hormones and puberty blockers which create sterility.”

But Democrats and members of the LGBTQ community expressed outrage at the governor’s signing of the bill, especially because it took place on June 1, the first day of LGBTQ Pride Month.

“If you don’t think that was intentional, you’re kidding yourself,” said St. Petersburg Mayor Rick Kriseman, at a press conference in front of City Hall to raise the city’s Pride flag, kicking off the 2021 St Pete Pride Celebration. “It was very intentional. He knew exactly what he was doing when he signed that today.”

“It excludes transgender people from public life, including participation in sports. It’s shameful that our Governor and Florida’s Republican Party would attack a group of people who already experience constant discrimination, bullying and high rates of suicide.”

“I think that it was just unconscionable,” added St. Petersburg-based Democratic state Rep. Michele Rayner. “He has spit in the face of so many citizens by signing this hateful bill.”

Nathan Bruemmer, the President and acting Executive Director of St Pete Pride, said that while the symbolism was “certainly purposeful,” he said that he didn’t want anyone in the LGBTQ community to lose their focus about what Pride month is all about.

“Pride Month is ours,” he said. “It is a celebration of who we are in our resiliency. And nothing, not even the signing of this bill is going to take away from that.”

The NCAA has threatened to cancel events in states that pass transgender sports bans. Some 30 states had introduced similar bans this year.

“The NCAA and other organizations have said that they would not continue doing business in Florida with regards to if we signed this bill. So what’s in peril is about $75 million, and that is a significant amount,” Rep. Rayner said.