Pho 88 is one of numerous Asian restaurants near the corner of Mills Avenue and State Road 50, which is now branded the Mills 50 district. The area was once called Little Vietnam for its large number of Vietnamese businesses. (Pete Reinwald/Spectrum News 13)


They see Little Saigon Vietnamese Restaurant. Then they see Banh Mi Boy Bakery & Café, and Tien Hung Market Oriental Foods Center. And as they continue along Colonial Drive, they figure they’ve stumbled upon a Little Vietnam.

This business district once carried that name, the result of an influx of immigrants to the area after the Vietnam War.

The district now calls itself Mills 50, so named because its historic heart beats at the busy intersection of Mills Avenue and State Road 50. And it continues, in some cases thrives, with the help of other Asian businesses, including Chinese, Korean, and Thai.

You don’t appreciate Mills 50 for the stroll as much as for the scents: a door-to-door aroma of meats, soups, sauces, spices, and incense.

You also notice, especially right now, not even a whiff of politics.

A few days before Election Day late last week, the district showed no sign of an election, or signs of support. No “Pass this amendment” or reject that one. No Trump or Biden. No MAGA or malarkey.

Consistent with that, several business owners this week politely declined to talk with a Spectrum News 13 reporter about any social or political issues that might be on their minds. 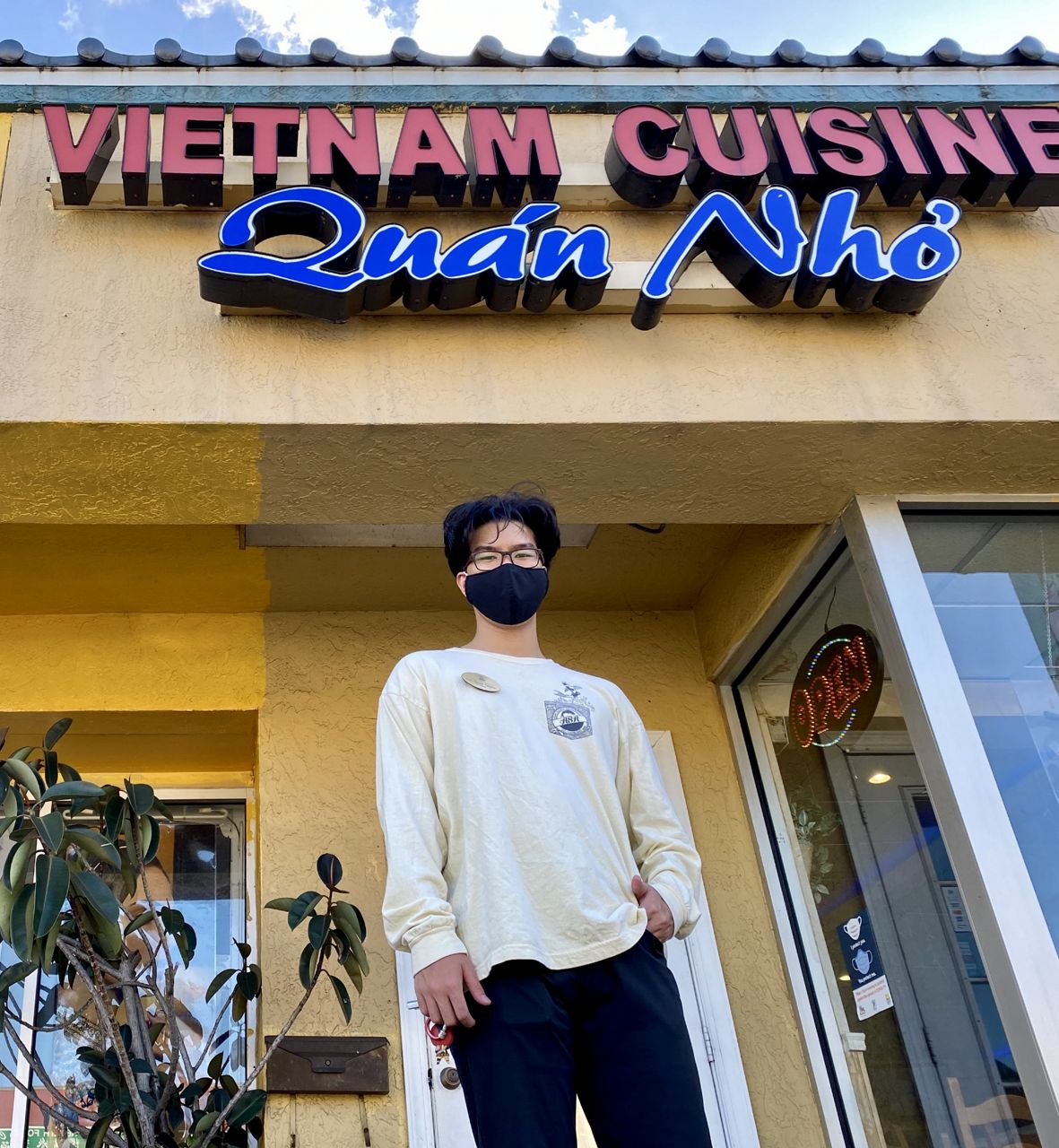 Duc-Thanh Nguyen is president of UCF’s Asian Student Association. He says he often shops and dines in Orlando's Mills 50 district, which is full of Asian businesses. (Pete Reinwald/Spectrum News 13)

“It's been a hardship of making the American dream work,” said Duc-Thanh Nguyen, a second-generation Vietnamese American who visits Mills 50 frequently, recounting conversations he says he has had with his mother about the district. “They've only worked together in the Vietnamese community to build what they have, which makes it very hard for them to expand their connection.”

Observers pointed out to Spectrum News 13 that the Mills 50 district represents a fraction of the breadth and diversity of Orlando’s and Central Florida’s Asian American communities and voters. According to 2019 U.S. Census estimates, Asians represented 5.7% of Orange County’s population, almost double that of Florida’s 3%. That doesn’t include any of 2.8% of residents who identified as two or more races.

With particularly large populations of Indian Americans, Filipino Americans, Chinese Americans, and Vietnamese Americans, Central Florida’s Asian Americans represent a potentially powerful voting bloc on issues important to them. Those include jobs and the economy, hate crimes and immigration — particularly in the era of President Donald Trump — and the biggest national topic of all: the coronavirus pandemic.

Asian Americans thereby could emerge as a difference-maker in a state notorious for razor’s-edge presidential elections — and for deciding who becomes president.

“We are having a great second generation who are born here, so it is an increasingly powerful group,” said Shally Wong, a Hong Kong native who works as special assistant and community liaison for Orange County Mayor Jerry Demings.

The question remains how many Asian Americans will turn out Tuesday to vote. A recent exclusive Spectrum News/Ipsos survey of Florida residents showed that 64% of Asians said they were likely to vote in the national election. That compared with 68% for all Floridians.

Yet 28% said they were unlikely to vote. That marked by far the highest percentage of the four racial groups surveyed.

That largely could be from a lack of political representation and outreach to potential Asian American voters. U.S. Rep. Stephanie Murphy, a Vietnamese American who lives in Winter Park, represents Seminole County, plus Orlando and other parts of Orange County for Florida’s 7th Congressional District. As such, she stands as an exception to the problem of Asian American representation.

“If you were to ask Asian Americans in general, who do they know on the ballot, have they ever met that individual — anyone on that ballot — especially looking at the primary elections because those are more local, a majority of them will go, ‘I don't know; I saw them on TV’ ... or ‘He came into my business,’ and that’s it,” said Onchantho Am, a Cambodian American who is president of the Greater Orlando Asian American Bar Association.

Efforts to get out the vote

Am said lawyers from her association embarked in January on an initiative to educate and engage particularly Orange County’s Asian American communities. They handed out forms. They served as interpreters. For voting resources, they referred residents to the Orange County Supervisor of Elections, which participated in a virtual information forum.

Elections Supervisor Bill Cowles “has been amazing in being able to explain things to a certain demographic that might not be fully engaged in the elections,” Am said.

In a recent news release, Chen emphasized the political influence of Asian Americans as the country’s fastest-growing racial group. Asian Americans also remain America’s highest-educated and highest-paid minority group, though with large income discrepancies among nationalities, according to recent studies.

Leaders in Central Florida’s Asian American communities point to Wong, Orange County Mayor Demings’s special assistant, as a force in efforts to get the communities working together and establishing their power. For this article, she connected Spectrum News 13 with Prashant Patel, president of the Orlando-based Indian American Business Association and Chamber.

Patel said he thinks the Asian American community in general aims to “live in harmony and be prosperous and helpful to each other.” As an example, he said, his association gave out thousands of masks in the early months of the pandemic, when they were short supply. In March, he said, the business association conducted informational events on government economic assistance.

“You help each other,” he said.

Patel said he thinks all Asian American communities generally agree about issues such as jobs, immigration and hate crimes.

Regarding jobs and the economy, Patel mentioned many in the Indian American community who own or work in small businesses. He owns Third Eye Vision, an Orlando-based low-voltage and securities-systems technologies company. Observers likewise point to communities such as Mills 50, where small businesses dominate over national retail chains. 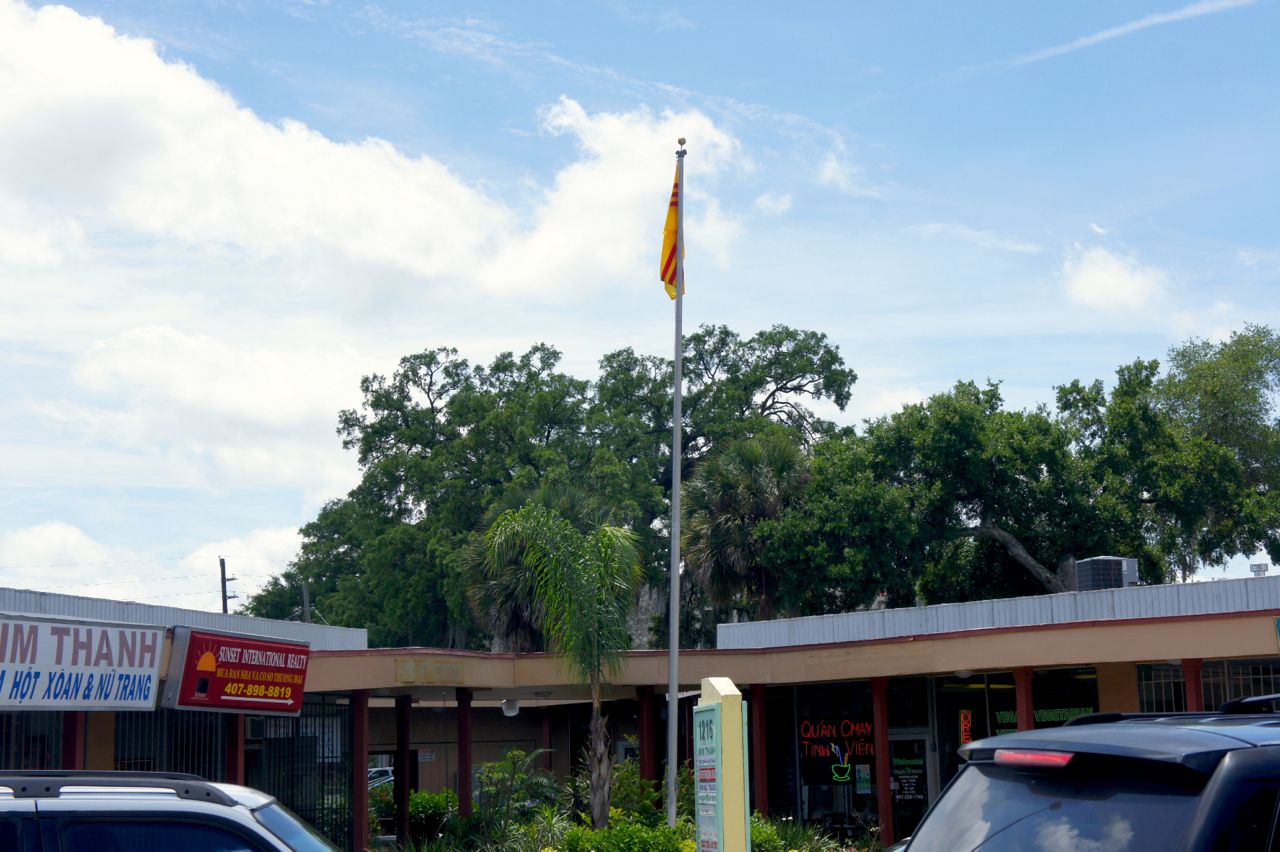 A Vietnamese flag flies in a small courtyard among a group of businesses in the Mills 50 district of Orlando, which is named after State Road 50 and Mills Avenue. (Courtesy of Ricky Ly)

“One that comes to mind is saying it's the ‘Chinese virus, ‘the Kung Flu’, the rhetoric that the president uses to kind of enforce this information, incite more panic ... ,” said Duc-Thanh Nguyen, the second-generation Vietnamese American. He is a junior studying mechanical engineering at the University of Central Florida.

‘We’re taught to keep our head down’

The Trump campaign also has attempted to reach Asian Americans. During a September stop in Orlando, the president's daughter Ivanka Trump thanked a group of Asian Americans for their help on the campaign, according to reports.

Am, of the Greater Orlando Asian American Bar Association, said her group’s voter-education and outreach initiative doesn’t aim to tell Asian Americans how to vote.

“The question is, ‘What concerns do you see in your community, which needs to be a topic of discussion for these candidates’ — we want the candidates to actually see and hear our voice,” she said. “And I think the concerns of the Asian American community … we're taught to keep our head down and just keep working.

“But that's changing when you talk to the younger generation, maybe to college students. They might say that, ‘No, we're actually putting on a forum where we discuss hate crimes,’ which is great and empowering in itself because that's the next generation, who feel comfortable enough to have that discussion. So, it's changing.”

For example, Nguyen serves as president of UCF’s Asian Student Association, which he said has worked among other UCF organizations with APIAVote in trying to empower Asian Americans.

Asian Americans maintain a strong emphasis on family, experts point out. Some potential voters, especially those with financial and health care hardships, might forgo interest in an election to concentrate on the health and wellbeing of their families.

“They feel as if their vote doesn't matter at the end, which is completely wrong,” Nguyen said. “Their vote matters.”

An APIAVote survey released in September said 44% of Asian Americans identified as Democrat, 23% Republican, and 31% independent or other.

In that respect, Vietnamese Americans stood out among all Asian American groups.

“The elders are hardcore Trump people, but then the younger people are all like, ‘What's going on?’” said Ricky Ly, a Vietnamese American who lives in East Orlando.

Ly certainly wonders what’s going on. He’s a civil engineer and Tastychomps.com food blogger who says he twice served as a Bernie Sanders delegate at the Democratic National Convention.

“So, you know, you can tell, I'm pretty horrified,” he said. 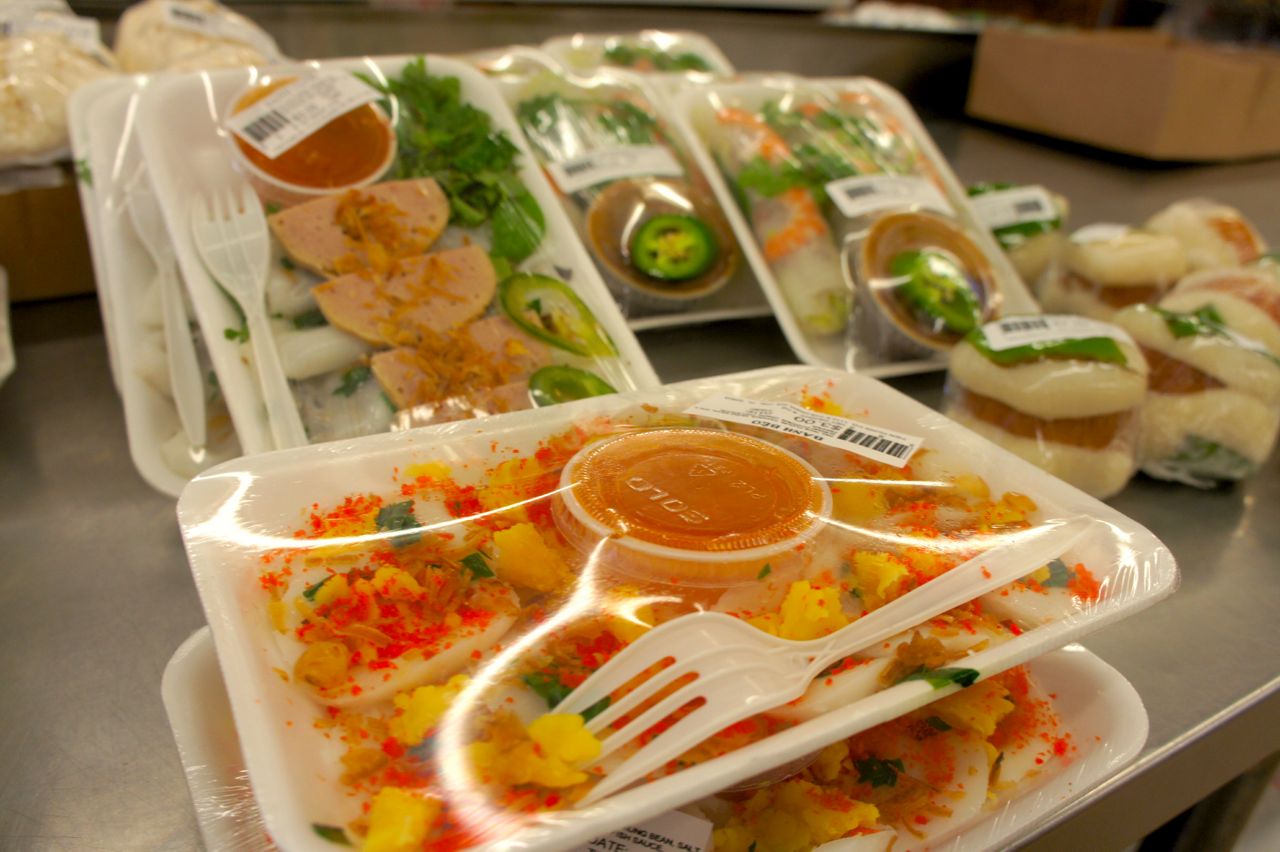 Many of the businesses in the Mills 50 district are Vietnamese, though the area formerly known as Little Vietnam has expanded to include Chinese, Thai, and other Asian stores. (Courtesy of Ricky Ly)

Even though his parents aren’t Republicans, he said, he joined a support group called Asian Americans with Republican Parents. He said the group includes “all these young, mostly Vietnamese Americans just talking about how some of their parents are disowning them” for supporting Biden.

For one thing, Ly likened Vietnamese Americans’s support for Trump and Republicans to GOP support among many Cubans. After their experiences with Ho’s North Vietnam and Castro’s Cuba, such GOP supporters see the Republican Party as more intolerant of communism and more likely to push back against any communist threat.

Nguyen, the UCF student, pointed out that Vietnamese Americans align with Trump for different reasons, presumably including business and financial ones. He likened those to people who have secured places on lifeboats.

“They ignore like the president's rhetoric because they're on the boat,” he said.

Like Ly, Nguyen said he continues to frequent the Mills 50 district, especially as a shopper and diner. Nguyen said he even brings friends from his engineering classes to visit there, and why else?

“To experience the flavors,” he said.