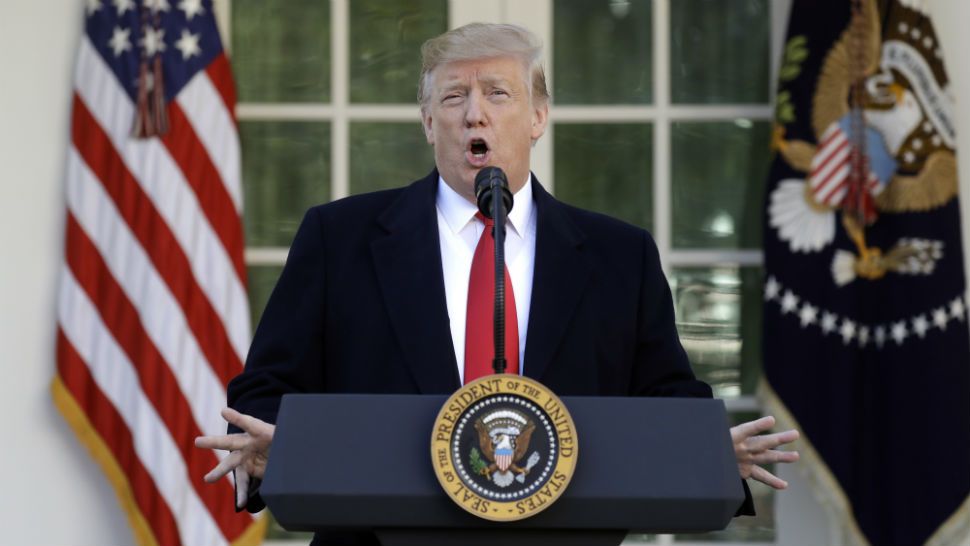 President Donald Trump speaks in the Rose Garden of the White House on Friday in Washington. (AP Photo/Jacquelyn Martin)

Longest Government Shutdown In US History Over

NATIONWIDE — President Donald Trump late on Friday night signed a resolution to reopen the government, at least for now.

After disagreeing for five weeks, the president and Democratic leaders have come to a temporary deal. The short-term spending bill is only good for 21 days.

And does not include funding for Trump's border wall. Giving both sides of the political fence until February 15, to come up with a resolution or risk sending the country back into a shutdown.

It would not immediately provide money for Trump's long-sought border wall, though he said if he did not get the $5 billion he has pushed for, the government will shut down again in three weeks or he will declare a state of emergency.

While some in political circles called it a retreat, Trump's signing of the resolution came on the 35th day of the partial shutdown as hundreds of thousands of federal workers were not getting paid and the nation's airports saw increasing delays.

"This was in no way a concession," Trump said in a tweet late Friday, fending off critics who wanted him to keep fighting. "It was taking care of millions of people who were getting badly hurt by the Shutdown with the understanding that in 21 days, if no deal is done, it's off to the races!"

An all concrete Wall was NEVER ABANDONED, as has been reported by the media. Some areas will be all concrete but the experts at Border Patrol prefer a Wall that is see through (thereby making it possible to see what is happening on both sides). Makes sense to me!

The president changed his wording regarding the wall. During Friday's speech, he said, "We do not need 2,000 miles of concrete wall from sea to shining sea — we never did; we never proposed that; we never wanted that — because we have barriers at the border where natural structures are as good as anything that we can build. They’re already there. They’ve been there for millions of years."

However, while on the campaign trail, he said this during a speech.

"We will build a great wall along the southern border. And Mexico will pay for the wall," he had said.

It was one of many times he mentioned a wall.

As president, Trump tweeted about a concrete wall, such as a tweet from December 31, 2018.

An all concrete Wall was NEVER ABANDONED, as has been reported by the media. Some areas will be all concrete but the experts at Border Patrol prefer a Wall that is see through (thereby making it possible to see what is happening on both sides). Makes sense to me!

The Trump administration has changed the wall into a barrier with steel slats in the last few weeks.

Regarding the shutdown, local lawmakers are reacting to the latest development.

Democratic U.S. Rep. Darren Soto made his way back to Orlando to share news of the government reopening with air traffic controllers.

Fellow Democratic congresswoman Stephanie Murphy says this temporary deal is a chance to lay everything out on the table.

"Look, this is a negotiation. Neither side is going to get 100 percent of what they want. We are operating in a divided government, so that's why I think it's important to have a bipartisan bicameral summit process so we can get the right people to the table," Murphy said.

U.S. Sen. Rick Scott believes the government should be opened permanently or not at all. He says it is tough to settle these high-priority issues with a stop-and-go-mentality.