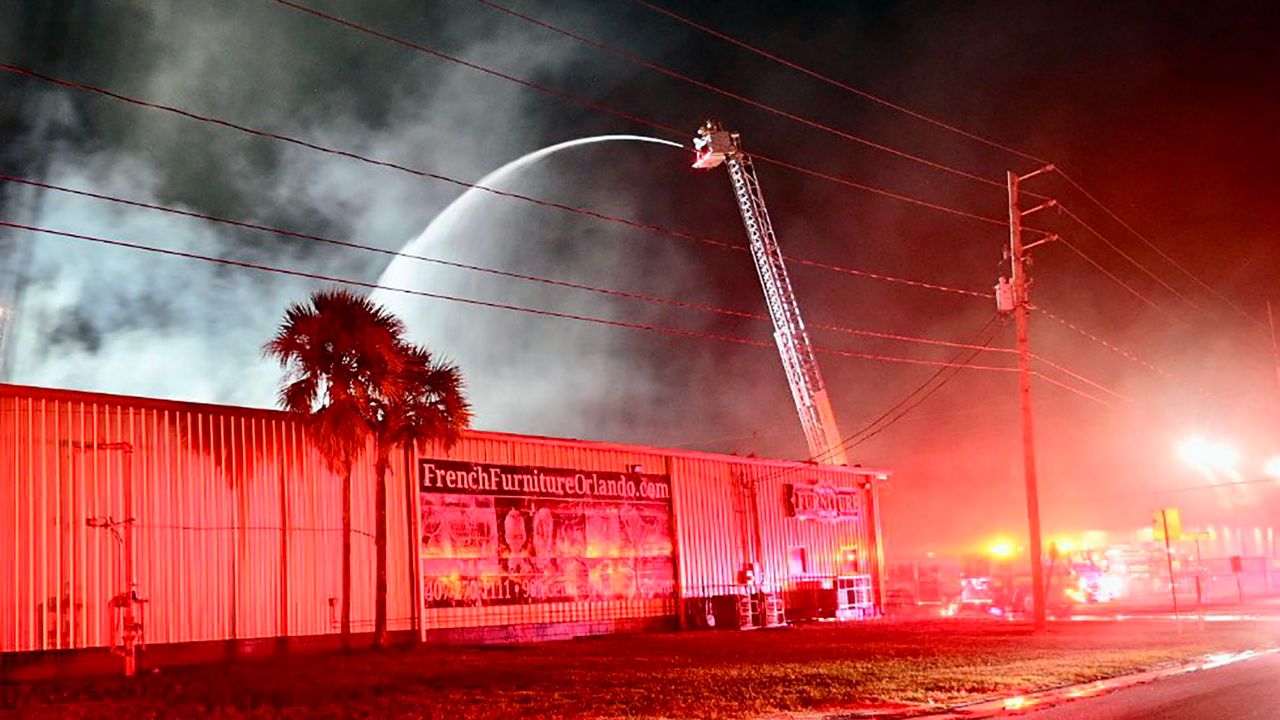 ORANGE COUNTY, Fla. — A third person has died from injuries sustained when flames broke out at a warehouse unit storing fireworks, with two other people injured, according to the Orange County Sheriff's Office on Saturday.

Landon Bourland, 24, was the third person who has died, authorities said. The other were 23-year-old Lindsey Phillips and 22-year-old David Gonzalez. They were three of at least five people who firefighters say were trapped at the multi-unit warehouse.

At around 7:10 p.m., fire crews were called out to a multi-business occupancy warehouse at 901 Central Florida Parkway in Orlando, with one of the businesses included French Furniture Orlando, LLC.

They were met with big billowing smoke and fireworks shooting off into the night sky.

More than 80 FFs & 31 units were dispatched at approx 7:10pm to a multiple-occupancy warehouse with heavy flames/smoke, w/ fireworks stored inside the building actively exploding. Crews made multiple rescues, transporting 4 patients. SFM will investigate the cause. No FFs injured https://t.co/kE7YEaTXkg pic.twitter.com/M4QzfwQgXM

There was such a big response by fire and rescue, especially since people were trapped inside.

The State Fire Marshal is investigating the cause of the fire.

Three people were taken to Orlando Regional Medical Center and a teenager was sent to the Orlando Health Arnold Palmer Hospital for Children.

Those include victims with burns, according to fire crews.

The battalion chief says his team was aggressive in fighting the fire and getting inside to get those people out.

“When we have victims trapped, we go in and we risk more than we usually would. With a building like this with active explosions and fireworks inside a building very similar to the one in Melbourne, I would not initially send crews inside but because we did have confirmed victims inside, we had crews interior making rescues while fireworks and explosions were going on all around them,” said Battalion Chief Garrett Wienckowski.

Wienckowski mentioned the deadly blaze at the Phantom Fireworks in West Melbourne on Monday.

But, despite the dangerous conditions for the crew inside the Orlando warehouse, no firefighters were hurt even though more than 80 were on scene, said Wienckowski.

He also explained that the warehouse had different businesses using it and one of the businesses had a unit that stored fireworks.