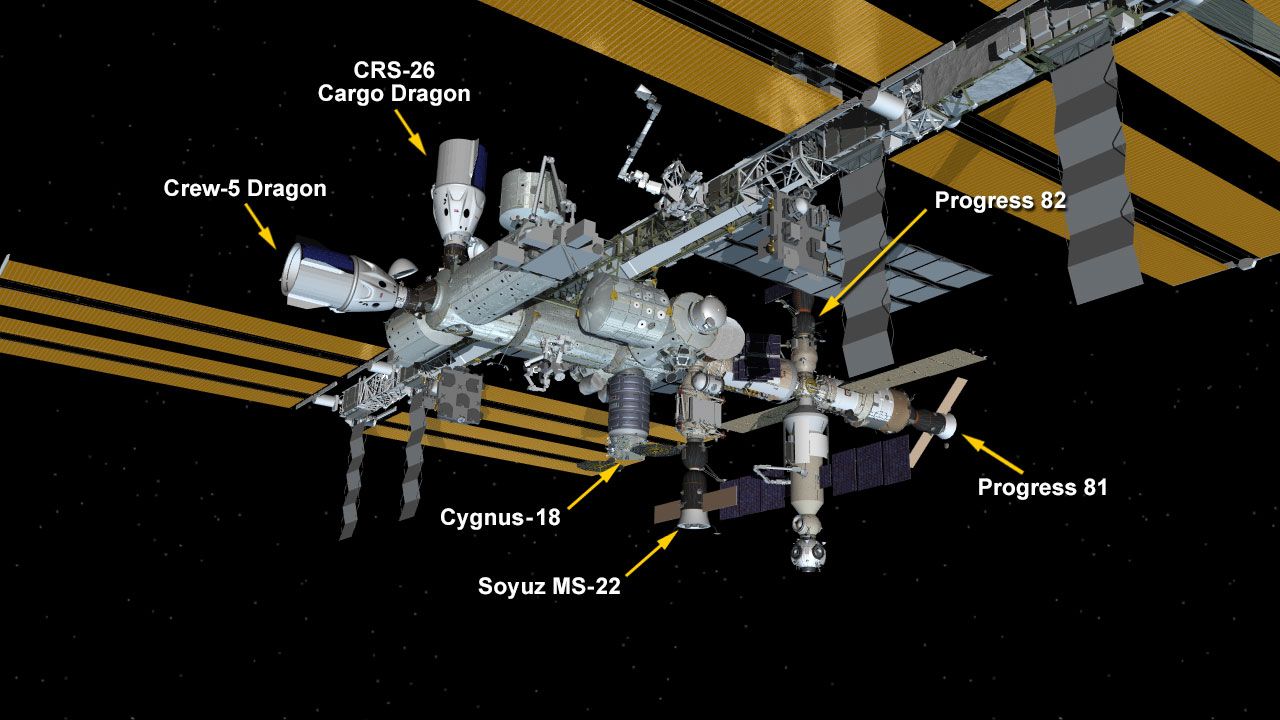 This illustration shows the latest configuration for the International Space Station with the arrival of the SpaceX CRS-26 Cargo Dragon on Sunday, Nov. 27, 2022. (NASA)

BREVARD COUNTY, Fla. — Less than a day after launching from the Kennedy Space Center in Florida, the SpaceX Cargo Dragon spacecraft carrying a new slate of science supplies arrived at the International Space Station.

NASA confirmed that the spacecraft was soft captured at the zenith port of the Harmony module of the ISS at 7:39 am EST.

“Great work down there today. We’re excited to unpack and get to work,” Cassada said to Mission Control in Houston after the Dragon made soft capture with the Space Station.

Sunday morning’s docking brought 7,777 pounds (3,528 kg) of science supplies and cargo to the orbiting outpost. As noted with the ice cream reference, it also included a collection of Thanksgiving treats for the astronauts of Expedition 68, which would’ve arrived in time for the holiday, were it not for the weather delay last week.

The CRS-26 launch was the debut mission for Cargo Dragon 211-1, the last new Cargo Dragon set to be added to the SpaceX fleet. It brings the total number of Dragons to seven (four crew, three cargo) until the debut of a newly announced Crew Dragon, which is targeting its inaugural flight in 2024.

Underneath the pressurized Dragon capsule in the trunk space are a pair of ISS Roll-Out Solar Arrays (iROSA). It’s the second set to arrive at the ISS, following the first, which launched with the CRS-22 mission in June 2021.

The iROSAs, which are built by Florida-based Redwire Space in partnership with Boeing and Spectrolab, a Boeing subsidiary; are the third and fourth arrays to head up to the ISS. Once all six are installed, they are expected to increase the power on station by up to 30 percent, from 160 kilowatts up to 215 kilowatts.

#CRS26's @SpaceX Dragon spacecraft has separated from its Falcon 9 rocket and is now on its way to the @Space_Station.

Tune in for docking coverage beginning at 6am EST (1100 UTC) on Sunday, Nov. 27: https://t.co/OiuPCalmzR pic.twitter.com/0Srwcraxi9

During a pre-launch teleconference with media, Montalbano described the newest solar arrays as having “critical importance.”

“In addition to the two solar arrays that are to be delivered on SpaceX-26, we have some life support equipment being delivered, some GPS hardware, some exercise hardware and some medical equipment,” Montalbano said.

He noted that because of the time needed to install the newest iROSAs, this Cargo Dragon will stay docked to the ISS for 45 days, longer than the typical 30 days for a non-crewed Dragon.

Crew onboard the Space Station will use the Canadarm to remove the iROSA wings from the Dragon trunk. iROSA wing 3 will be installed during a Dec. 3 spacewalk, which is set to begin at 7:25 am EST. and last up to seven hours. NASA is targeting no earlier than Dec. 19 to install wing 4.

Back on Tuesday, Nov. 15, NASA astronauts Frank Rubio and Cassada completed a spacewalk to install the support hardware for the third and final set of iROSAs targeting launch in 2023.

In addition to the iROSAs, there were also four CubeSats launched for NASA’s Educational Launch of Nanosatellites (ELaNa) 49 mission. They join four others to make up the 24th mission for Nanoracks’ CubeSat Deployer mission, which will jettison the following CubeSats from the ISS:

These CubeSats join a host of other science experiments, like the seeds for the Veg-05 experiment to grow and harvest dwarf tomatoes as well as the Moon Microscope, a type of blood smear imaging designed to perform in space what is a common medical test done on Earth.

In addition to the NASA-backed payloads, the Melbourne-based ISS National Lab also helped sponsor a number of experiments that were sent to the Space Station on the CRS-26 mission.

The next mission set to head up to the ISS will be the SpaceX Crew-6 mission targeting launch Feb. 15, 2023.