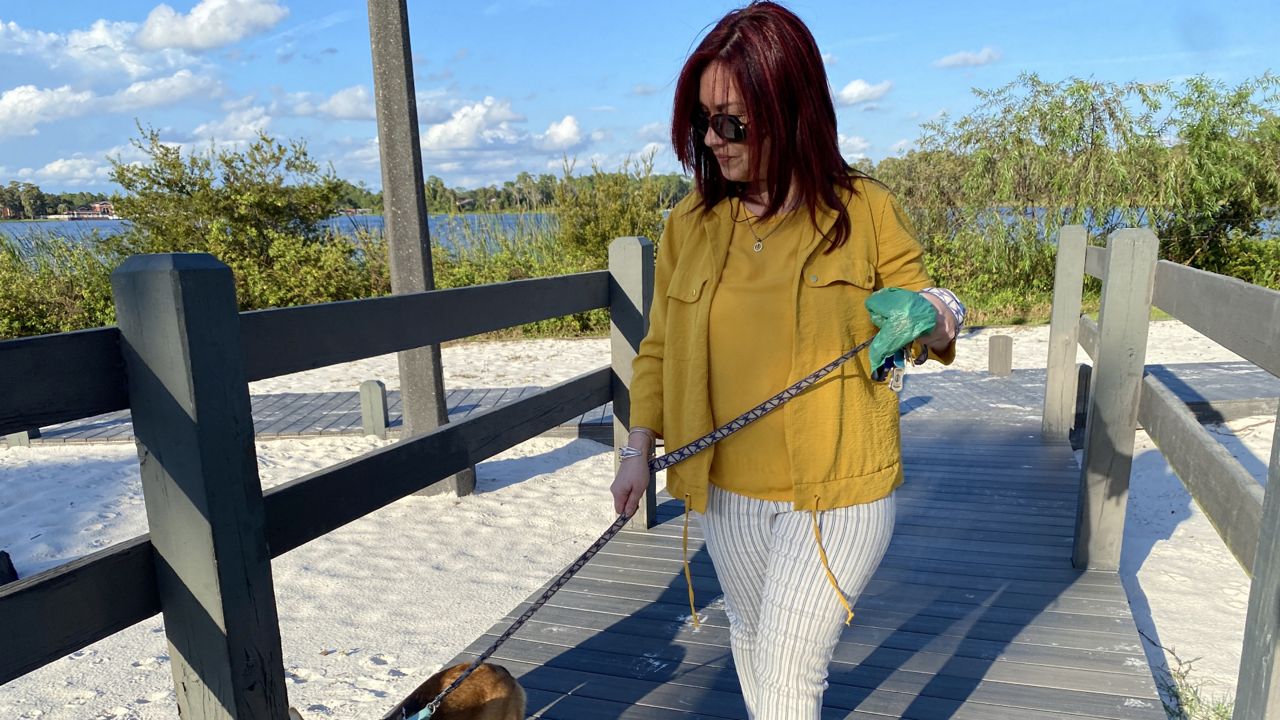 Ivette Luna walks her dog, Nala, at the new apartment community she moved to after her landlord of seven years tried to raise her rent by 90%. (Spectrum News/Molly Duerig)

When rent went up from $1,000 to $1,500 earlier this year at the duplex Ivette Luna had rented month-to-month for seven years, the level of her stress increased as well.

But two weeks later, Luna says, her landlord texted her that the rent was going up again — to $1,900 a month, almost double what she previously paid.

“That’s insane,” Luna remembers thinking. “Now I’m going to be evicted. Where am I gonna go?”

With help from attorneys at Community Legal Services of Mid-Florida, Luna was able to successfully use Orange County’s rental notice ordinance as a defense in court, allowing her more time to search for new housing. She’s hopeful the ordinance can help other struggling renters, too.

“I think it’s important people know that we have a new ordinance that will help you have at least a little bit of control,” Luna said. “At least that gives you a chance, so you can find something more affordable for you.”

Although Luna says she is happy in the new apartment she shares with her teenage daughter and their dog, Nala, affording rent is still a financial balancing act. She says she pays more now for a smaller apartment.

“I used all of my savings to move to, supposedly another place more affordable, but it’s not," Luna said. "I had to look for a second job in order to pay this rent."

It’s a similar challenge facing many Florida renters, including in Orlando, where a minimum-wage worker must work 95 hours a week — or nearly two and a half full-time jobs — to afford a modest one-bedroom apartment, according to the National Low Income Housing Coalition.

Orlando has seen some of the fastest recent rent inflation among metros, with average rent skyrocketing 32% higher than it was before the pandemic first began, according to Apartment List.

But after weeks of heated discussions and court hearings on the topic, rent control in Orange County won’t be happening in the immediate future.

Despite an ordinance voters will see on this year’s ballot for a one-year pause on rent hikes for certain apartments. A judge last week directed the county’s elections office not to certify votes on the ballot measure.

Those votes will still be counted and the results will eventually be made public in some form, according to the Orange County Supervisor of Elections Office.

But rent control can also have negative consequences. Some opponents argue it drives down the availability of quality housing over time: In part because, as landlords’ revenue declines, so does their ability to invest in capital improvements.

“What typically happens is once you instill rent control, developers and owners start seeing that it’s a risk,” Eric Maribojoc, the executive director of George Mason University’s Center for Real Estate Entrepreneurship, previously told Spectrum News. “If the government can control rents, then you never know if what you’re going to invest in will make the kinds of returns that you need to make something economically viable.”

For Luna, the scenario facing Orange County voters at the ballots this year is confusing: They’ll be able to vote on a temporary rent control ordinance, but those votes won’t be certified.

Luna said she's grateful for the county’s new rental notice ordinance and hopes it can help more people, especially in a time when many are being displaced because of rising housing costs.

In Orange County, 57% more evictions were filed in June of this year compared with June 2019, according to data from the University of Florida’s Shimberg Center for Housing Studies. Since last year, eviction filings have risen 188 percent as of June, the most recent month for which data is available.

Anyone who believes a property owner has violated Orange County’s rental notice ordinance, can report it by calling 311. Landlords found to be in violation of the ordinance are subject to a civil citation that includes a fine.

So far, 21 landlords have been investigated for violating the ordinance, but none have yet been punished, according to an Orange County spokesperson.