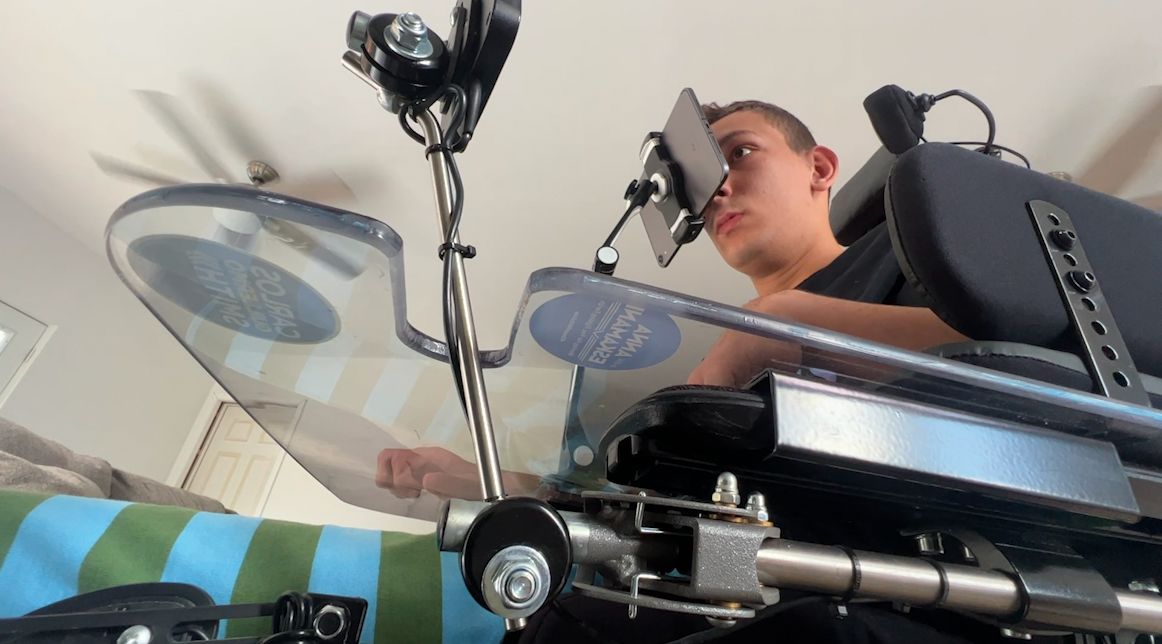 JJ Holmes is on the waitlist to get a Medi aid iBudget Florida waiver, which will provide services to help him live an independent life. (Spectrum News)

Thousands of disabled Floridians are currently sitting on a waiting list for the Medicaid iBudget Florida waiver, which would provide them with services to help them live independent and healthy lives.

But according to the Agency for Persons with Disabilities, as of October, the waiting list had 22,488 people on it.

Elizabeth Perkins, associate director of the Florida Center for Inclusive Communities at the University of South Florida, says it’s been this way since 2011 because the list is chronically under-funded while it continues to grow at a substantial rate.

“The issue is that in terms of the waitlist, there have been appropriations for additional funds over the years, but it has never really addressed the net amount,” she said.

One of the people on that list is JJ Holmes. Like any other high school senior, he is typing, reading, and reviewing for the SAT.

But unlike the other 18-year-olds in his class, he was diagnosed with cerebral palsy at birth and needs extra help to live his life. He doesn’t let it slow him down — he has a passion for politics and big dreams for his future.

“I want to go to college first, then become an activist,” he said.

His mom, Alison Holmes, can’t help but beam with pride.

“I mean, it’s, it is unbelievable that he can do this," she said. "I mean, I am just so proud of what he’s achieved."

But at her core, JJ Holmes worries about what both their futures hold. He has spent the last 16 years sitting on a waiting list for the Medicaid iBudget Florida waiver that would get him the help he needs, but in that time, he hasn’t moved from the bottom tier.

“When we went on the waitlist initially, it was kind of, eight- to possibly 11-year wait was the average," Alison Holmes said. "And so I thought well, we can kind of hang on as long as we know that this is coming down the road. But now it’s ended up that we really have no idea — is just that we’re just sitting, sort of dangling in a black hole and don’t know whether there’s going to be a safety net that comes in at 17 years, 20 years or just if there’s nothing."

JJ Holmes says he completely depends on his mother for nearly everything. Every day she lifts him out of bed and gets him in his wheelchair — something she says can be an excruciating task, given her bad back and hips.

“It is something that it's been great that he has the independence and his own wheelchair, but it’s really difficult getting them in and out and… it is absolutely exhausting," Alison Homes said. "I mean, at the end of the day, I’ve just — my body has never not known tiredness."

At almost 60 years old, she’s not sure how much longer she’ll be able to lift her 110 pound son, something she does many times a day. And if she doesn’t get help soon, she said his life could change drastically.

“I mean, if he doesn’t get off the waitlist in time, it’s going to mean that he lives in a state run institution," she said. "Which is going to cost 10 or 20 times more than it would just to get the med waiver,."

It is a possibility that JJ Holmes says keeps him up at night.

“I’m scared,” he said. “I want to live independently at home instead of being in an institution. I couldn’t imagine what my life would be like. I would have no life to be frank”

With his disability, Holmes needs help to wipe his chin, going to the bathroom and eating and drinking. These are all tasks he and his mother say they could get help with if they got off the waiting list and finally got some in-home help.

“I don’t understand why the waitlist isn’t funded because it’s something that helps everybody," Alison Holmes said. "It’s a good thing for society."

According to the state’s Agency for Persons with Disabilities, enrollment into the iBudget waiver is based on level of need and is not based on length of time on the waiver waitlist.

But as his mother gets weaker his need to get out into the world increases, the pair are not sure how much longer they can go on like this.

“It’s relentless,” said JJ Holmes. “It really is, there’s no letup. If this isn’t a crisis, I don’t know what is.”

But they say there is not much more they can do, except hope for their turn to come.

“That’s all I can do is just keep going and keep waiting,” said JJ Holmes.

In 2022, the Florida Legislature approved $60 million to transition about 1,100 people off the waiting list.

The Florida DD Waitlist Campaign is aiming to raise awareness of the thousands who are still waiting for Florida legislators, while advocating for increased funding to get more people the help they need.

Spectrum News 13 contacted the Agency for Persons with Disabilities to ask why people are not moved off the waiting list faster. The agency responded with the following statement:

​"Since 2018, APD has enrolled 7,073 individuals onto the iBudget waiver, a historic number of Floridians with disabilities thanks to Governor DeSantis’ financial commitment to APD. APD funds services such as Supported Employment and other short-term services for individuals on the waiver waiting list. Individuals in crisis and in foster care are automatically enrolled onto the waiver. Additionally, some choose to remain on the waiting list after being offered enrollment on the iBudget waiver."