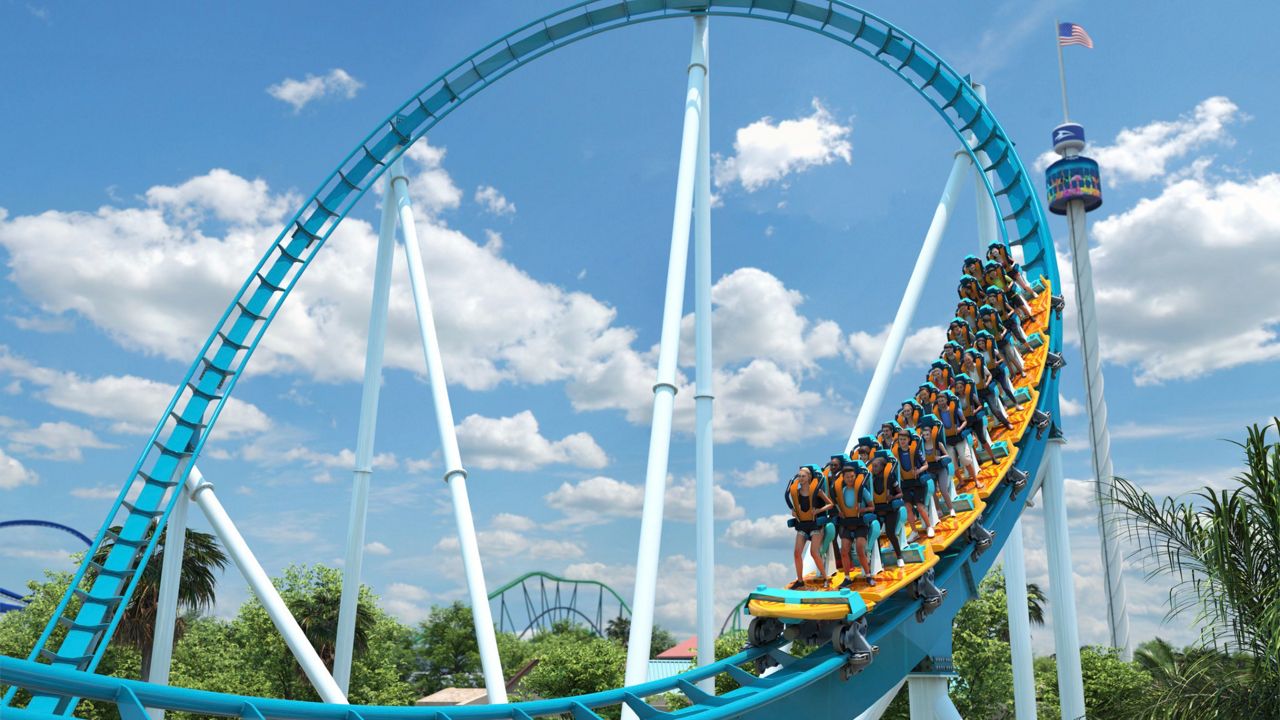 Set to open in spring 2023, Pipeline will be unlike any other coaster currently at the park, according to officials. It will be a new kind of stand-up style coaster.

“This ride experience is inspired by the surfing cultures found throughout the world,” said Jonathan Smith, corporate VP of rides and engineering for SeaWorld Parks and Entertainment. “And the ride vehicles are inspired by that too.”

The coaster will have a surf theme and feature coaster trains designed to look like large surfboards. One of the unique features of Pipeline will be the “wave jumping motions,” which will make riders feel like they are actually surfing the waves.

“One of the elements that makes you feel like you’re surfing — there is a wave curl inversion and that is designed specifically to be an alley-oop surfing maneuver,” Smith said.

SeaWorld Orlando’s Pipeline will start with a dynamic launch and have wave jumping motions to make riders feel like they’re surfing. The coaster will reach speeds of up to 60 mph and send riders up to 110 feet in the air. pic.twitter.com/S8vOMWZGCS

Pipeline, with nearly 3,000 feet of track, will start with a dynamic launch. The coaster will reach speeds of 60 mph and send riders up to 110 feet in the air. Riders will be secured on the coaster in a "surfing position" by an over-the-shoulder harness system. The seats move up and down with the riders as they go through the twists and turns.

The coaster is inspired by the different surfing cultures found around the world, including in places like California and Australia, and that theme will be incorporated not just on the attraction but throughout the whole attraction area.

Here’s a close up look at a piece of the track for SeaWorld Orlando’s Pipeline coaster. pic.twitter.com/ru36wToaqV

In June, SeaWorld confirmed it was building a new coaster, but stopped short of sharing any more details.

Construction of the coaster is still underway and has been visible — both inside and outside the park — for months. Pipeline is being built between the park's entrance and an area that was previously used for SeaWorld's festivals and special events.

With the arrival of a seventh coaster imminent, SeaWorld is now billing itself as the coaster capital of Orlando. The park's other coasters include Mako, Manta, Kraken and Ice Breaker, which debuted in February.

SeaWorld won’t be the only park preparing to debut a new coaster in the spring. Disney World has also said that its next big attraction, TRON Lightcycle Run, will open at Magic Kingdom in spring 2023.