The funding comes from funding earmarked for the Dayton Recovery Plan. (File)

DAYTON, Ohio — The City of Dayton is using $7 million in pandemic recovery funds to help entrepreneurs start or expand restaurants, salons and other street-level small businesses in neighborhood commercial areas.


The Dayton City Commission on Wednesday approved the creation of the First Floor Fund (FFF) as one of Dayton’s first investments from its nearly $140 million Dayton Recovery Fund.

Through the program, the city plans to invest millions of dollars in startups and existing businesses that may have struggled to land traditional financial loans or other funds as a result of the COVID-19 pandemic.

Qualifying borrowers can get a combination of primary and forgivable loans for up to 70% of project costs. The loans aim to shore up those areas where small or new businesses may have difficulty getting over the finish line such as new machinery, building renovations or working capital, according to the city. 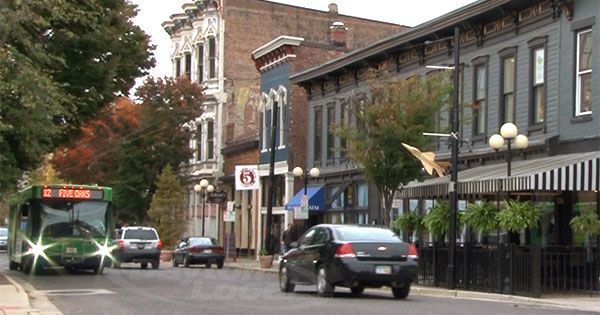 The First Floor Fund aims to invest $7 million in new and expanding small businesses in Dayton neighborhoods including the Historic Oregon District (pictured). (Photo courtesy of City of Dayton)

“First floor business owners play a major role in the vibrancy of our city,” said Dayton City Manager Shelley Dickstein. “They help create more walkable places and provide the amenities employers and residents want and spur developments and investments in our neighborhoods.”

Stephanie Keinath, vice president of strategic initiatives for the Dayton Area Regional Chamber, called the announcement of the plan “great news for Dayton.”

The business ecosystem of downtown and other neighborhoods is “interdependent,” Keinath said. Even though small businesses don’t create the same tax base or hire as many employees as larger corporations, those restaurants, salons and retail shops are vital to the Dayton residents and employees who work in the city.

“More broadly, Dayton supports the region and acts as a sort of the catalyst by drawing people into the heart of our city — to spend their hard-earned dollars and to enjoy all the amenities the city offers,” Keinath added. “So, it’s really critical that we continue to support the growth of those small businesses that really improve quality of life.”

Keinath described these customer-facing businesses as often serving as a person’s initial entry-point into downtown Dayton or one of its neighborhoods.

“It could mean people coming down to have dinner or go to a store or to have a very one-off interaction, but overtime all of those interactions add up to a more vibrant community,” she added.

Dickstein requested the city administration come up with the framework for the First Floor Fund program. Property developers and the local commercial lending community then vetted the program before it went to the City Commission, the city wrote in a statement.

The funding comes from the $10.8 million in Dayton Recovery Plan funds earmarked for the city’s Economic Recovery initiative. The focus is on projects and investments that address economic disparities and promote further development in local neighborhoods.

Because startups are less likely to have received loans from traditional lenders, those business owners “weren’t able to leverage those relationships when federal Paycheck Protection Program loans became available in 2020,” the city wrote on its website.

The program is open to any small business owners. But the city’s goal is to provide needed resources and opportunities to minorities and women looking to start or grow a business.

Out of nearly 200 of these types of businesses in downtown Dayton, 38% are owned by women and 22% are Black- or brown-owned, per city data.

Applications will be available by mid-October on the CityWide website.

Todd Kinskey, Dayton’s director of Planning, Neighborhoods and Development, described the fund as a “high priority of several public and private community stakeholders.”

Keinath believes the support of the program and lower entry to borrowing funds may instill confidence in business owners who otherwise may fear opening or expanding out of a fear of a lack of foot traffic or high-risk lending situations.

“This program is really encouraging entrepreneurs, minority small-business owners and people who may not otherwise be able to access those resources to grow and expand by giving them an opportunity to tap into resources and exist in a space that’s very visible and accessible to the whole community,” she added.

On Wednesday, the City Commission also approved the use of Dayton Recovery Plan funds to support three enterprises and community organizations.

That includes the 6888 Kitchen food business incubator. It’s getting $750,000 to support the launch of its first phase — OH Taste LLC’s “Sharpen the Axe” education program for food business entrepreneurs.

Food businesses incubated at the 6888 Kitchen in the Arcade may then graduate to bricks-and-mortar sites and be eligible for FFF support.

Other organizations receiving funding include:

The City of Dayton expects to receive roughly $138 million in American Rescue Plan Act (ARPA) funding — the largest grant in the city’s history.

It’s viewed by city leaders as a once-in-a-lifetime opportunity to invest in minority communities disproportionately impacted and counteract long-standing economic and social inequities in Dayton. City leaders have voted to use those funds to address infrastructure, economic and equity issues.

To date, the City Commission has designated $9.4 million in Dayton Recovery Fund grants and contracts – the first few were approved just about a month ago.

For more information, go to daytonohio.gov/arpa.