Democrats are calling November ‘Roe-vember’ this year, declaring that women's reproductive rights are on the ballot come Election Day.

Since the Supreme Court voted to overturn Roe v. Wade this summer, momentum in November’s midterms seems to have shifted. What was once seen as a tough environment for the president’s party now seems somewhat more competitive, with Democrats picking up key wins and outpacing their 2020 performance since the high court ruled in Dobbs v. Jackson Women’s Health, which ended the constitutional right to an abortion.

And South Carolina Sen. Lindsey Graham may have given Democrats the fuel they needed to keep the momentum going, introducing a federal 15-week abortion ban earlier this week.

Members of his own party quickly tried to distance themselves from the proposed bill. Senate Minority Leader Mitch McConnell, R-Ky., told reporters he prefers the issue be decided at the state level, while Florida Sen. Rick Scott, the National Republican Senatorial Committee chair, said he would ‘look at it.’

Less than 24 hours later, Democrats in the lower chamber were pushing back on Graham's proposal. As part of the National Council of Jewish Women's Abortion Access Week of Action, Represenatives Debbie Wasserman-Schultz, D-Fla., and Sara Jacobs, D-Calif., held a press conference calling for more national access to reproductive health care.

“We cannot allow a government takeover of women's bodies, and that is what we are in the midst of happening,” said Schultz. 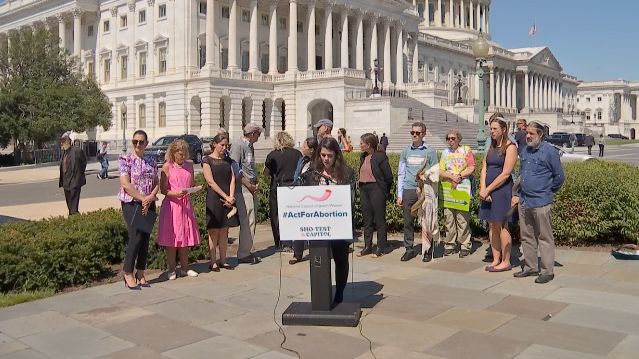 The pair of congresswomen were joined by Rabbis Lauren Holtzblatt and Annie Lewis and National Council of Jewish Women CEO Sheila Katz, as well as other members of the group. The presser ended with a group blowing of the shofar – a ram’s horn blown during services on the Jewish High Holidays – a symbolic call to bring attention to the fight for abortion rights.

“To me and millions of Jews across the country, it's a painful irony that the religious right has been working for decades under the false guise of religious freedom to overturn Roe and eliminate our right to abortion,” she said. “No one religion or belief system should be able to supersede others and dictate policies for a diverse nation.”

“Our Jewish experience tells us that our reproductive freedoms are integrally bound to our religious liberty; we are committed to advancing the goals of reproductive justice so that every person can make their own moral and faith-informed decisions about their body, health, and family,” the group’s website reads.

Jacobs, the youngest jewish member of congress, has been a fierce advocate for women’s reproductive rights, including introducing her ‘My Body, My Data Act’ this summer. She told Spectrum News after the press conference that she has been talking to voters across the country as a part of her role with the Democratic Congressional Campaign Committee.

“I'm a 33 year-old woman; pretty much every conversation I have with my friends is like, ‘who's going to have a baby, who doesn't want to have a baby.’ This is a kitchen table issue for millions of Americans across this country. And we absolutely see that it is driving people out to vote.”

Jacobs, who says she is grateful to hail from California where abortion rights are protected, said that everyone should be concerned about the national abortion ban Graham introduced earlier in the week.

“Even us in California cannot take for granted our access and our rights to reproductive health care,” Jacobs added. “When I'm talking to my constituents, even those that don't personally support abortion, every single person I talked to agrees that what the Republicans are doing, what the Supreme Court did, went way too far and that they want to be able to make have the freedom to make the decisions they need to make about their own body and their own health care with themselves, their families, their doctors and without government officials being involved.”