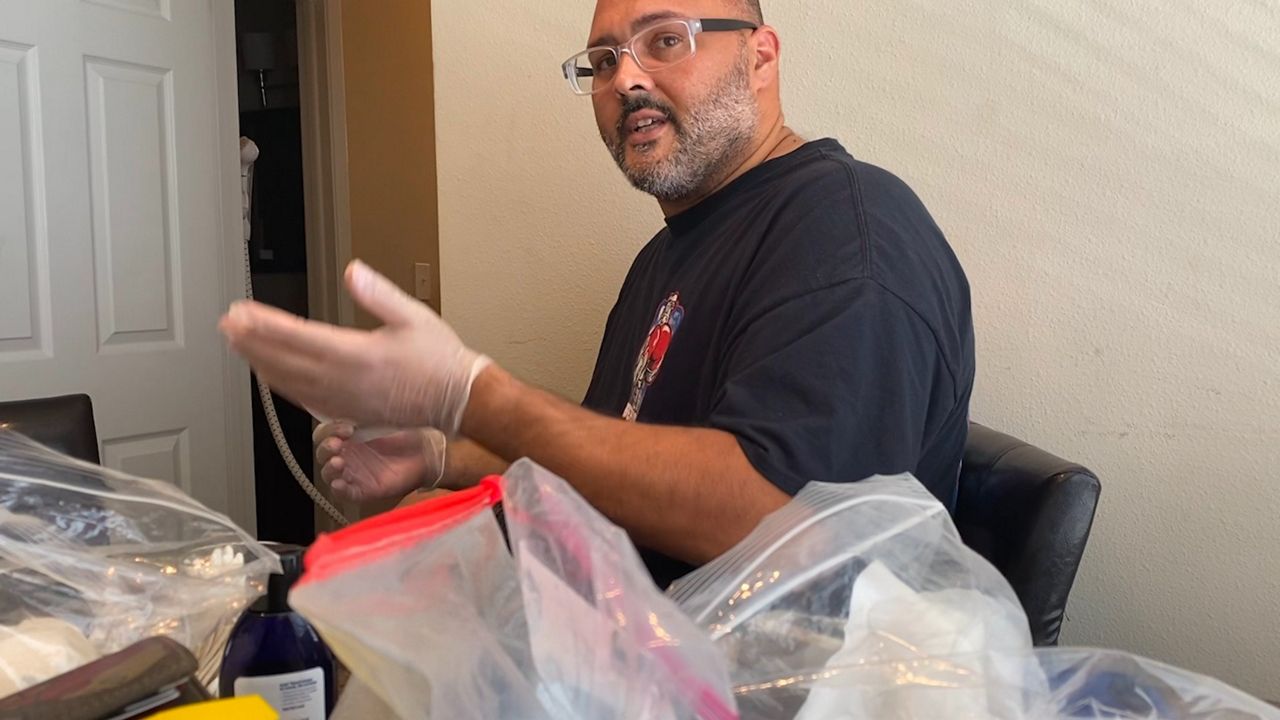 Manuel Alers Ramos says an infected callous on his right big toe put him in the hospital and left him with more than $300,000 in medical bills. (Spectrum News/Alice Herman)

SEMINOLE COUNTY, Fla. — What would become a traumatic, expensive and prolonged medical emergency for Manuel Alers Ramos started out as a tiny callous on his toe.

Ramos wears steel-toed boots to work as a fiberglass technician, and early this spring he noticed the shoe on his right foot was rubbing painfully, forming a sore on his big toe.

One morning in May, he woke up disoriented, with a fever and chills. Later that day, at AdventHealth Hospital in Altamonte Springs, Ramos was diagnosed with two bacterial infections that had stemmed from the wound on his foot.

Unable to breathe on his own, he was put in a medically induced coma and intubated.

“I told the nurse practitioner that was taking care of me at the time that I couldn’t breathe, don’t let me die,” he said.

Back on his feet now, Ramos calls his recovery “miraculous” — but it’s far from over. He isn’t cleared to return to work until October, so he and his wife will rely on her income alone to begin to pay his medical bills, plus their normal monthly expenses.

An initial itemized bill showed the hospital had charged $8,158 per day for a room in the intensive care unit, where Ramos spent five days — a non-ICU room cost $5,347. According to the bill, for 14 days in the hospital, the total amounted to more than $327,000.

Health care costs, by the numbers

A slew of recent studies show Florida ranking among the states with the highest health care prices — and the heaviest out-of-pocket expenses for patients.

A study by the Commonwealth Fund measuring employee contribution to health care premiums and deductibles, found Floridians spend about 16% of their total income on health insurance. And another, by the RAND Corporation, found that hospital prices paid by private insurers more than tripled the amount paid by Medicare.

Ramos, who is privately insured, does not yet know how much of his hospital stay his insurance will cover but says he already owes more than $4,000 in out-of-pocket expenses related to his illness. The burden of recovering from a serious illness while struggling to come up with money to cover his bills has taken a mental toll, too, he said.

“The first thing that comes to your mind is, ‘You won’t be able to do it', " Ramos said. “You cannot with that kind of bill … plus your everyday bills —  your light, your water, your internet.”

To cover costs, his family has resorted to fundraising online, using the crowdfunding platform GoFundMe to appeal to friends and community members.

In Central Florida, some say Ramos’ story is alarmingly familiar. About 28% of people in Central Florida have medical debt in collections, according to data collected by the Urban Institute. More than 43% of people in communities of color in the area are saddled with debt compared with 24% of their white counterparts.

The Inflation Reduction Act, which has cleared the U.S. Senate this week and is slated to be passed by the House of Representatives, contains measures intended to reduce health care costs, including allowing Medicare to negotiate the prices of certain prescription drugs. It will also set a cap of $2,000 in out-of-pocket expenses for seniors enrolled in Medicare and cap insulin prices at $35 per month for those same patients.

Because the bill will primarily target Medicare, legislative relief for people like Ramos — who are privately insured but facing high costs nonetheless — remains elusive.

In a statement to Spectrum News 13, AdventHealth wrote:

“Medical billing can be a complex process. AdventHealth has a robust support network for consumers, both to help them navigate the intricacies of insurance and billing, and to provide financial support when necessary. We ask any patient with billing concerns to connect with our teams to reach a solution.”

GoFundMe.com, or any other third-party online fundraiser, is not managed by Spectrum Bay News 9 or Spectrum News 13. For more information on how GoFundMe works and its rules, visit http://www.gofundme.com/safety.​

Alice Herman is a Report for America corps member who is covering health care for Spectrum News 13. Report for America is a nonprofit national service program that places journalists in local newsrooms to report on undercovered issues.