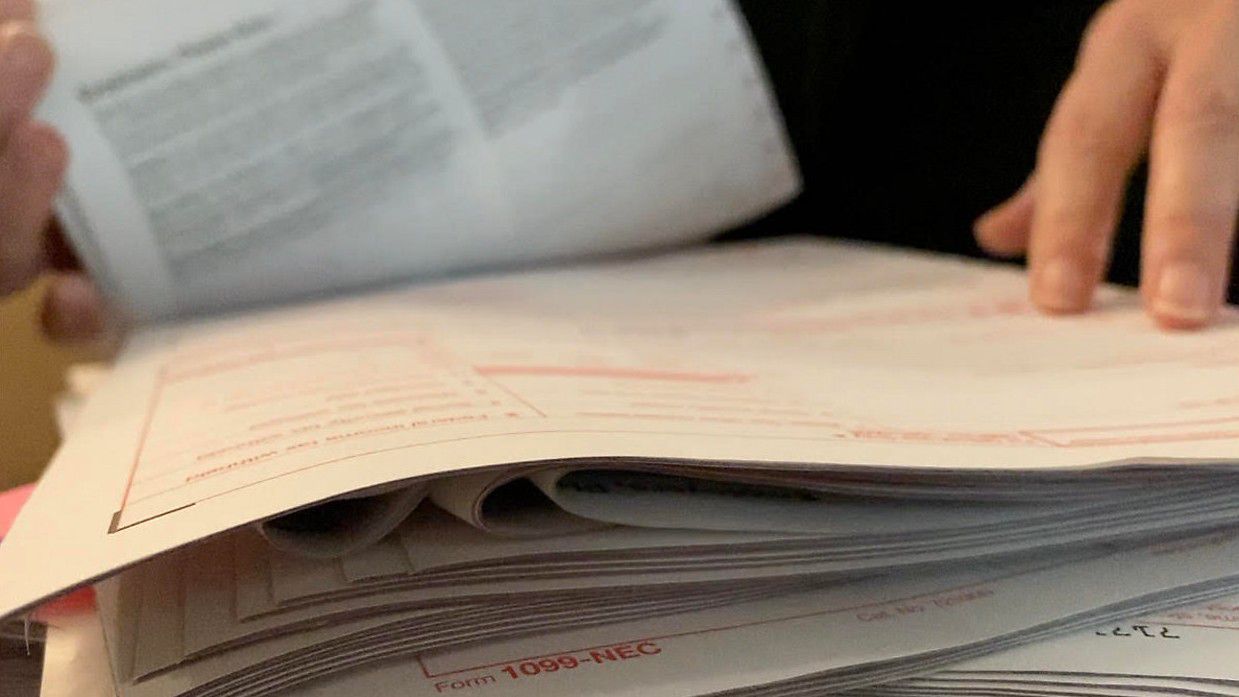 Alison Eddings shows what an information return looks like.

CHARLOTTE, N.C. — Tax season may be over, but a report is fueling frustration.

A report in May from the Treasury Inspector General for Tax Administration (TIGTA), a watchdog of the Internal Revenue Service, found the IRS threw away 30 million paper-filed information returns.

Information returns are not tax returns. According to the IRS, they are documents submitted by third-party payers, not taxpayers.

The TIGTA report cites that the IRS closed its tax processing centers in March and April of 2020 in response to the pandemic, and since reopening in June of 2020, they continue to have a significant backlog of paper-filed returns.

The report says this inability to process the backlog led the IRS to destroy the information returns in March of 2021.

In an online statement, the IRS explains they destroyed these information returns to make room for documents related to the 2021 filing season.

"System constraints require [the] IRS to process these paper forms by the end of the calendar year in which they were received,” the IRS said in their online statement. "This meant that these returns could no longer be processed once filing season 2021 began. Not processing these information returns did not impact original return filing by taxpayers in any way as taxpayers received their own copy to use in filing an accurate return.”

While the IRS says there won’t be an impact, there is a debate among experts.

A certified public accountant based in Charlotte, Alison Eddings, believes there could be an impact.

“You can’t prove what doesn’t exist, so how can we go back and make sure that what was filed on your behalf was destroyed or not,” Eddings said. “Not really any way to know if you are affected and that is a concern. It will take a few years for everything to shake out.”

She says primarily, it's small businesses that submit paper-filed information returns because they may not have the option to file digitally like a large business.

She and her husband own an accounting firm called Top Dog Tax and Accounting, where they focus on working with small businesses.

“This was 12-13 months after the start of COVID and we all know what a huge backlog there was, and apparently management at the IRS determined that the best way to get rid of this paper-filed backlog is to destroy the returns,” Eddings said.

In their online statement, the IRS states they processed 3.2 billion information returns in 2020.

They say 99% of the information returns were used to match to corresponding tax returns and processed. They destroyed 1% of the paper-filed returns, which is the 30 million.

Larry Harris, the director of Tax at Parsec Financial in Asheville, and a CPA, says he believes the IRS when they say there won’t be an impact.

“It’s not good news because of the way it sounds and that is not unimportant frankly,” he said. “But on the corporation or individual side, they have a copy of their W-2, and if you are the corporation who filed them, you have a copy. The IRS destroyed their paper copies.”

“It could have had some impact on the IRS’s compliance efforts, but I’m not even sure it's that significant,” he added. "I just think it’s not good news on top of other bad news and concerning news and concerning operational issues from the IRS for the past several years."

Eddings, however, is worried.

“But what if you also destroyed your evidence because you thought, 'it’s fine I have a W-2, I have a 1099.' What if that’s not good enough now, we just, we really don’t know,” Eddings said.

In their online statement, the IRS says this decision was made due to its antiquated software.

“You and I don’t have a grasp of what it would be like to try to do what they do,” Harris said. “But to try to do it without pretty powerful IT infrastructure, you just can’t do it without that and that’s what lent itself to this."

Harris says the pandemic only fueled the problem more.

“I’m involved with government at the local level and see it all across the board. It is challenging to find workers, and then it is doubly challenging for the IRS. The pandemic was really difficult,” he said. "They do such a tough job and you have to be there to do it, to process paper returns. So they fell terribly behind in processing paper returns, they fell terribly behind in their service. You can’t reach them on the phone, letters go unanswered for who knows how long."

Eddings says when trying to call the IRS help line to get questions answered for her clients, it’s hard to get through.

She says she has to pay to jump the line, but that only makes the issue worse.

“We’ve had to pay for line jumpers, which feels like an ethical thing,” Eddings said. “For a lot of preparers, it’s been an ethical struggle whether or not to pay for these line jumpers because we recognize the line jumpers are increasing the problem as well, but we can’t represent our clients without paying for it so we have to become part of the problem.”

She says for those who could file digitally, it’s been hard to log into the digital system, called the FIRE system, which stands for “Filing Information Returns Electronically."

“Logging into the FIRE system was almost impossible for small practices,” Eddings said. “In fact, the IRS was giving us guidance and saying, 'well, just try and log in at midnight when the traffic is lower.' And so lots of us would stay up until midnight trying to get logged into the system and just couldn’t get logged in, and we couldn't transmit that way. We had to paper file."

Spectrum News 1 reached out to the IRS twice for comment. They said they would get back to us.

In their online statement, the IRS says there will be no negative taxpayer consequences as a result of this action.

We also reached out multiple times to the issuer of the report, the Treasury Inspector General for Tax Administration, and have not heard back.