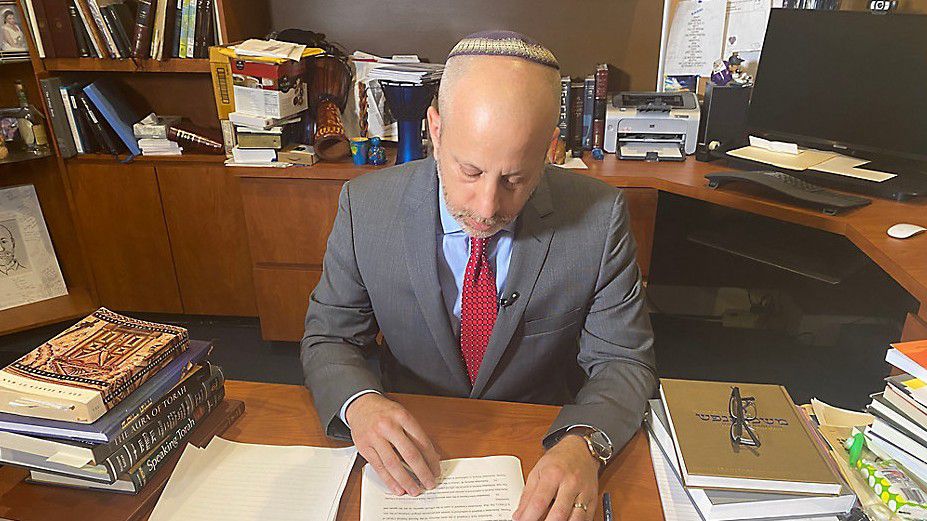 Rabbi Rosenberg looks over a legal filing at his desk. Photo: Melissa Eichman

Rabbi Jason Rosenberg spent Friday afternoon preparing for Shabbat at Beth Am, where he’s been for fifteen years.

“A synagogue is supposed to be a place of peace,” said Rosenberg.

Rosenberg is trying to keep that peace as he fights for religious freedom, joining a lawsuit against Florida’s abortion law.

“Judaism absolutely asserts that abortion is often permitted, sometimes maybe even required, and there is absolutely not a hard and fast deadline on that, there is no fifteen week deadline you have to obey,” said Rabbi Rosenberg.
The Rabbi is also concerned with how the law is worded.

“It would add an element of fear to it knowing that simply by teaching what I’ve always taught people and counseling people in my tradition we could all get arrested for it,” said Rabbi Rosenberg.

Calling the abortion ban un-American, Rabbi Rosenberg says his decision to join the lawsuit with others who share the same religious view was an easy one.

“I know I support abortion rights, I know I support religious freedom and a woman’s right to choose. The hard part was deciding about the practicality,” said Rabbi Rosenberg.

Now, the hard part, says the Rabbi, is the wait. There likely won’t be any movement on the lawsuit for weeks.

“You can’t say my religion allows me to kill other people. It will not work, it just doesn’t happen that way,” said Stemberger. “There’s a balancing test that’s gonna happen and you show that the faith is genuine and that everybody agrees with it and it’s just not going to uphold in our courts.”

Rosenberg says he is confident in his decision to sue.