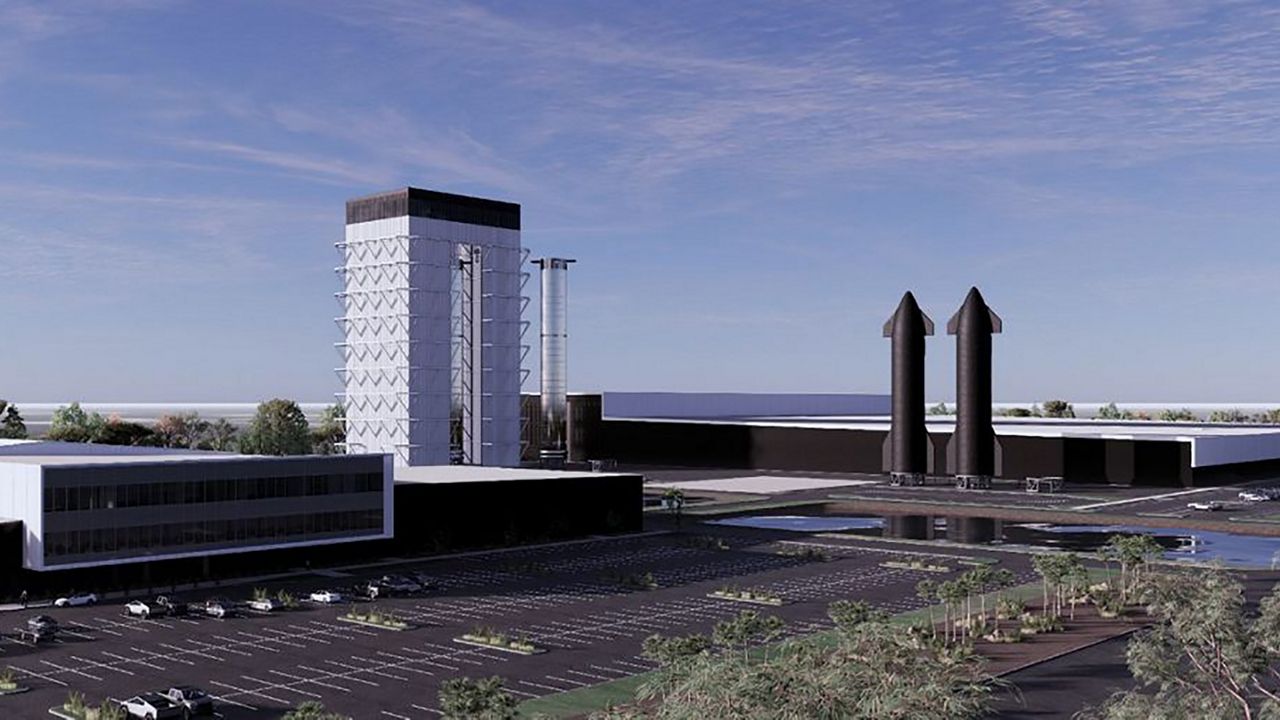 SpaceX created this rendering of what an expanded area at its Roberts Road site could look like in the future. (SpaceX)

BREVARD COUNTY, Fla. — With 33 launches under its belt in 2022 alone, SpaceX is hoping to increase its productivity by consolidating its Space Coast resources to a more centralized location.

The company is working in cooperation with NASA to expand its operations at Kennedy Space Center (KSC) by increasing its footprint by up to 100 acres.

The proposed expansion would take place at SpaceX’s leased property along Roberts Road. The site is where the company refurbishes Falcon 9 first-stage boosters in HangarX.

“It’ll support their overall operations for the Falcon, Falcon Heavy as well as the future of Starship, consolidated into one operational area,” said Don Dankert, the lead for National Environmental Policy Act (NEPA) compliance at KSC.

Dankert and his colleagues are responsible for preparing an Environmental Assessment (EA) to evaluate SpaceX’s proposed work since it requires NASA to execute a real property agreement with SpaceX under NEPA and other relevant laws.

“It allows NASA to evaluate the proposal to expand the Roberts Road Operational Area in its totality,” Dankert said. “So, we consider all environmental aspects — from natural resources, socioeconomic, cultural resources. Kind of the full gambit of environmental issues and concerns.”

In an online presentation, NASA described SpaceX’s desire to expand as an effort “to increase operational capabilities, efficiency and cost effectiveness of SpaceX’s operations.”

It went on to state that “SpaceX’s proposal is needed to streamline SpaceX’s local facilities in support of optimizing production and launch of their reusable launch vehicle fleet.”

As part of the EA, NASA will consider 14 resource areas to gauge the impact of the proposal.

“At this point, I think the things that we’re probably looking closer at are obviously Lagoon health issues; wetland impacts, potential wetland impacts for the site itself and the proposed connector road; and then natural resource impacts related to wildlife impacts within that area,” Dankert said.

As part of its proposed action, SpaceX told NASA that it would use up to an additional 100 acres near the Roberts Road site to develop an office of facilities that would handle the following:

SpaceX also plans to construct a roughly 1.6-mile connector road that would run from the NASA Parkway to the Roberts Road facility.

One of the big reasons for this desired expansion is to make way for work on Starship, SpaceX’s reusable two-stage rocket that is capable of sending more than 100 metric tonnes to orbit. It’s comprised of the reusable first stage, called Super Heavy, and the reusable upper stage, dubbed Starship.

Right now, testing of SpaceX’s Starship/Super Heavy rocket is underway in Boca Chica, Texas. It’s the site of the Starbase facility where they plan to launch the first orbital flight of the reusable rocket later this year.

The FAA also identified more than 75 actions required by SpaceX as part of the determination over whether it will be granted a launch license for the nearly 400-foot-tall rocket.

Dankert told Spectrum News that while there isn’t a one-to-one comparison of Starbase and KSC, some lessons can be learned regarding Starship.

“Considering environmental effects and impacts, I think a lot of that is relevant to thinking about and considering what potential future impacts or mitigations, things of that nature, that we need to offset anything as we work toward the future here at (Launch Complex) 39A,” Dankert said.

During a February update on Starship, SpaceX founder Elon Musk stated that it was important to have a launch site and construction facility in both Texas and Florida, not only for redundancy but also to reach the high level of launch cadence that SpaceX is trying to achieve for its Mars ambitions.

Musk: @NASAKennedy may play a much larger role sooner for @SpaceX if a more extensive environmental impact statement is called for. @MyNews13 pic.twitter.com/OfAVnJ8rnx

On July 21, SpaceX attached the fourth section of its Starship launch tower at Launch Complex 39A at KSC. The first moved from the Roberts Road site out to LC-39A on June 16.

While a Final Environmental Assessment for Starship was issued in September 2019, NASA said that communication with SpaceX will be ongoing prior to a future first flight from Florida.

“NASA will review the risks to the area and programs at KSC prior to any hazardous work,” Bob Holl told Spectrum News in a statement. “NASA will be involved in the lead-up of activities prior to the first loading and any static fire events of Starship and coordinate impacts across the spaceport.”

LC-39A remains a critically important launch pad not only because of its historical legacy at KSC, but also because it is the only pad in the United States from which NASA and its international partners currently launch astronauts to the International Space Station.

SpaceX is also exploring options to develop the 175-acre site at Launch Complex 49 for Starship operations. The company is still working on the full scope of what that would encompass. 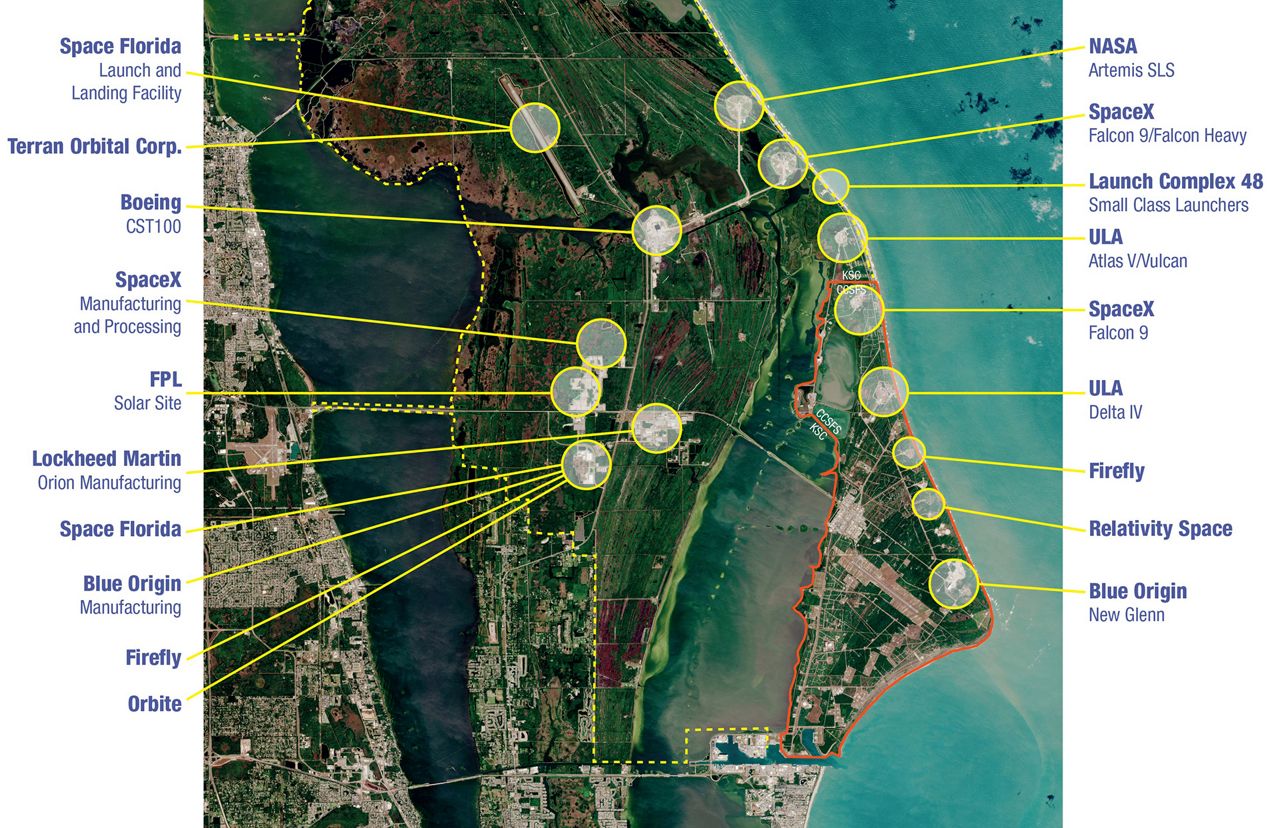 The 30-day public scoping period when people can voice their thoughts and offer constructive feedback on the project will end on Friday, July 29.

That can be done by submitting an email to: ksc-spacex-robertsroad@mail.nasa.gov. Mail can also be sent to Donald Dankert at the following address:

After this period of public comment closes, the draft Environmental Assessment will be created and circulated. That document is expected sometime in September.

At that time, another public comment period will open. Following that, NASA and SpaceX will review the comments and agency feedback in preparation for the Final Supplemental EA.

Once that is completed around November, NASA will either create a Finding of No Significant Impact (FONSI) or issue a Notice of Intent to Prepare an Environmental Impact Statement (EIS).

“And that really hinges on if there is a significant, unmitigable impact or impacts, then you move onto an EIS, which is a much more in-depth environmental review process,” Dankert said. “(That) would then culminate in what’s called a ‘Record of Decision.’ ”

KSC is working closely with both the Canaveral National Seashore and the U.S. Fish and Wildlife Service (USFWS) Merritt Island Wildlife Refuge (MINWR) along with the Florida Department of Transportation (FDOT) to ensure that this process is thorough and can help support sustainable growth at the multiuser spaceport, Dankert said.

“I think we have an amazing track record of doing that over the last 50 years in our partnerships with our two sister agencies in the Refuge and the Seashore,” Dankert said. “And we’ll continue to work together as we have for many, many years.”