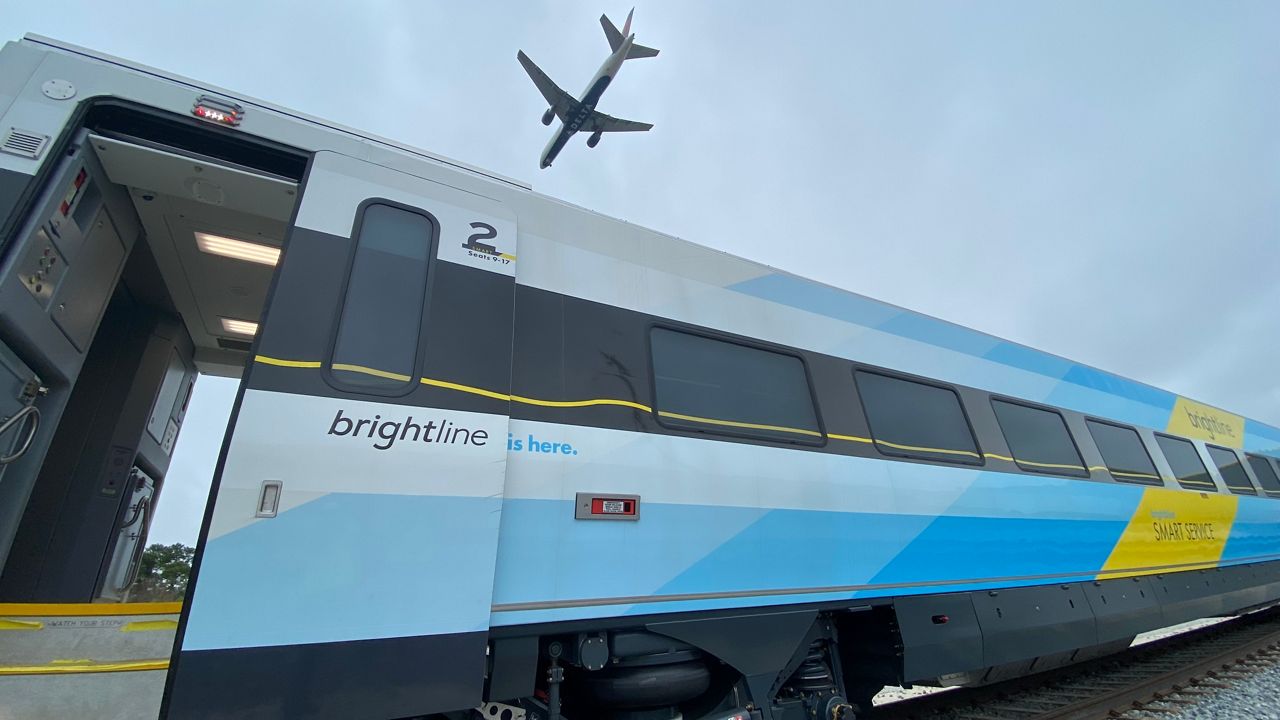 ORANGE COUNTY, Fla. — The next several years of mass transit in Central Florida will be characterized in part by the large investment in railways.

On Tuesday, Brightline Trains Florida, LLC, a high-speed railway company, announced that following input from “several community leaders to explore alternative alignments for our planned expansion from OIA (Orlando International Airport) to Tampa,” there would be a new station added to the organization's original plans at the Orange County Convention Center.


As part of the Sunshine Corridor announcement, Ben Porritt, Brightline’s senior vice president of corporate affairs, also noted that a station planned for Disney Springs would now be moved off property.

“An alternative station will be placed near the original Disney Springs site, albeit not on land owned by Disney,” Porritt said. “Taken together, the three integrated stations provide access to the largest economic and employment centers in Central Florida and offer the best opportunity for the success of Brightline and SunRail.”

Earlier in June, the Biden Administration announced $24.4 million would be coming to Florida to help with rail infrastructure, of which $15.9 million was put toward Brightline’s 67-mile expansion from Orlando to Tampa as part of its Phase 3 plan.

“People will find out more and more that the first grants that we got for the SunRail, Brightline expansion bode well for the future of commuters here as well as tourists getting to their destinations,” said Rep. Darren Soto, the congressman representing Florida’s 9th District.

That third phase also included a stop on Disney property at the Disney Springs location, but those plans were revealed to be up in the air on Monday.

During a meeting of the Central Florida Commuter Rail Commission (CFCRC), Brian Stanger, the modal development administrator for the Florida Department of Transportation (FDOT), walked board members through the latest updates for the Sunshine Corridor. 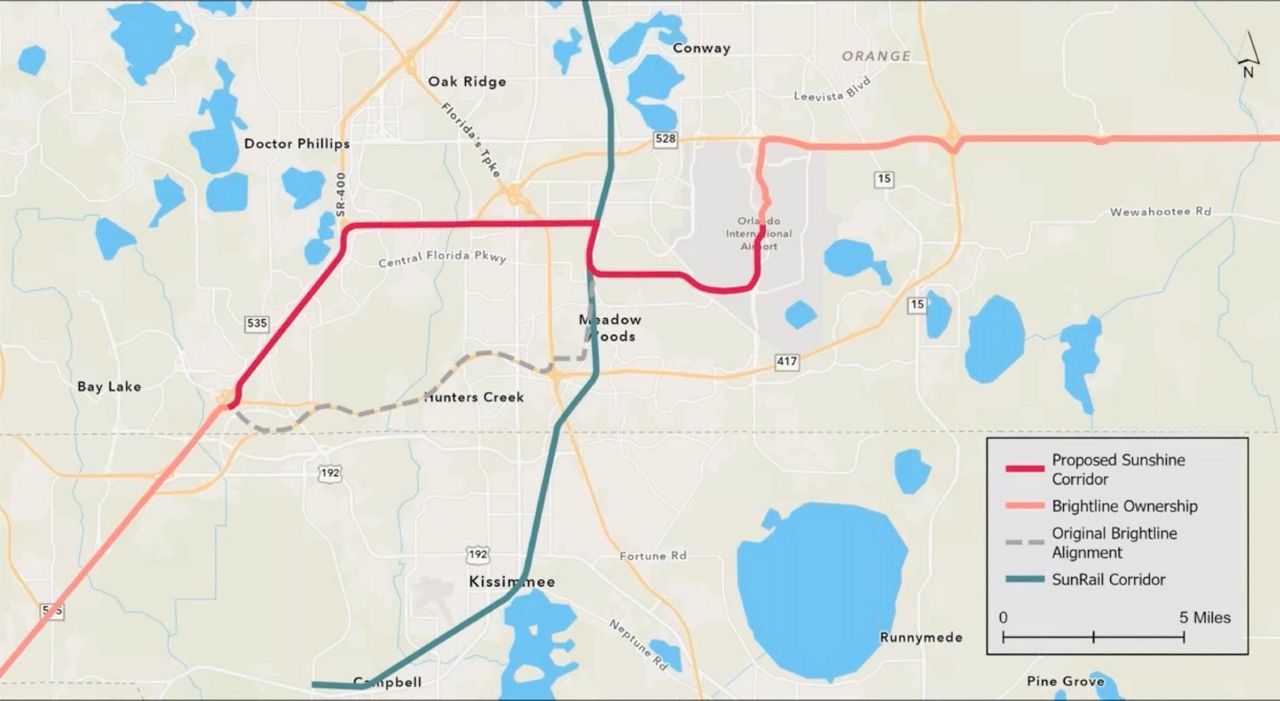 He presented a map that showed the original planned route that Brightline had discussed (see gray dashed line in map above) as well as what the Sunshine Corridor would look like (see red line above). Also, part of that map was the predominantly north/south SunRail route.

Part of the meeting materials included a series of maps in the “SunRail Workshop Brightline Universal Presentation.” It outlined the original route that Brightline was exploring along with the “Vision for Shared Corridor,” which described stations at the OCCC as well as South International Drive, near Disney Springs.

The map also pointed to a SunRail Transfer station, where the Brightline route intersects SunRail. 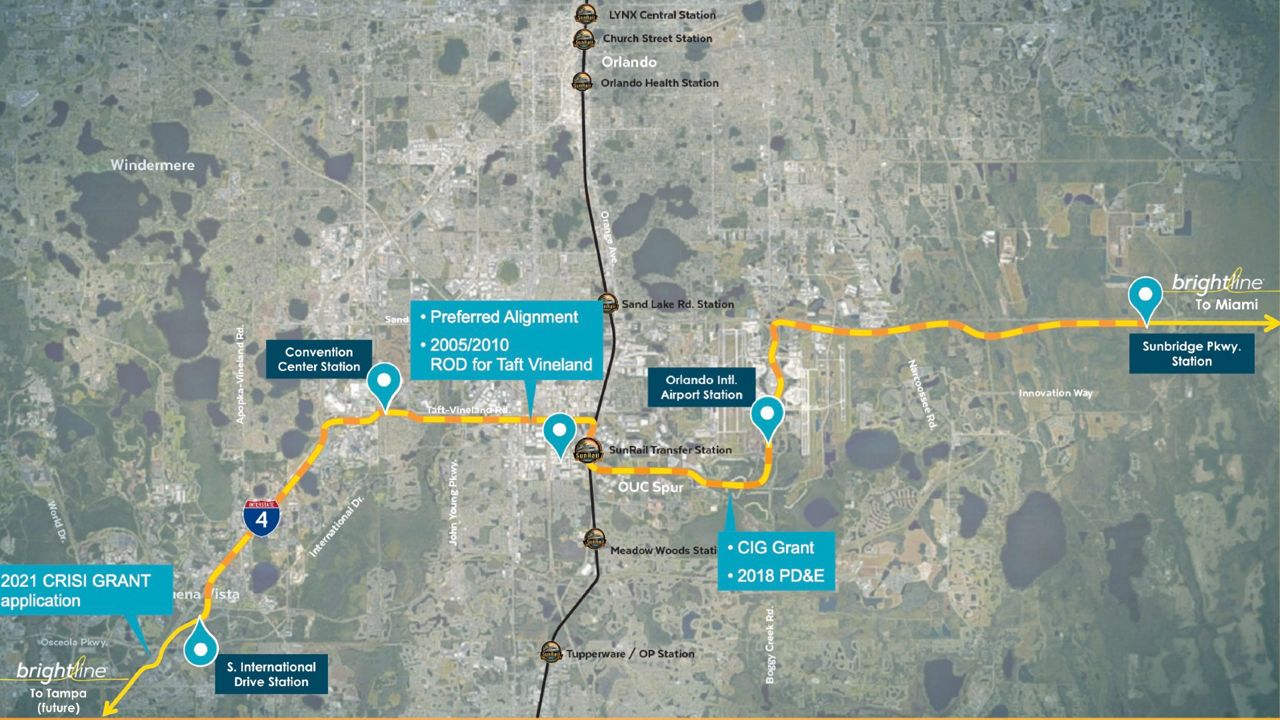 In a statement Monday evening to Spectrum News’ reporting partner, the Orlando Sentinel, Disney spokesperson Avery Maehrer said, “As many people who are involved in this project are aware, the new route configuration does not support a Disney Springs station and as a result, we don’t anticipate being part of this project.”

Soto told Spectrum News that despite Monday’s comment from Disney, he and others are still in negotiations to have them be a part of this project.

“Disney’s been a major leader in our region for many years,” Soto said. “They helped put Orlando on the map. They’re our top private employer and have been a great community partner. So, I have a lot of faith that we’re going to work this out over the next few years as we’re building out this major expansion of SunRail and Brightline.”

The path to this new Sunshine Corridor was paved in part because of NBC Universal’s investment in the new Epic Universe expansion to Universal Studios Orlando and its commitment to “support the dedicated entity’s financing of up to $125 million in private activity bonds to be used to fund the rail corridor and the Convention Center station,” according to the presentation.

Universal and Orlando’s Right Rail group stated a guarantee of “$13 million in annual ticket sales for the new Sunshine Corridor through the dedicated public entity.”

In a statement to Spectrum News on Tuesday, Orlando Mayor Buddy Dyer stated what he believed to be the importance of the project:

“Connecting our residents to jobs and expanding our region’s transit options is the driving vision for the Sunshine Corridor — an expansion of SunRail to the airport and to our region’s largest industry in hospitality,” Dyer said. “We are in the very early planning stages, including evaluating ridership and station locations.  We look forward to continuing these conversations and working with all our local partners to advance this shared vision to increase transportation options throughout our region.”

Those comments were echoed in a statement from Orange County Mayor Jerry Demings:

“Expansion of our theme parks along with businesses located in our tourist corridor is exciting news for our region,” Demings’ statement said. “It signifies that many investors are interested in doing business in metropolitan Orlando.  As our population grows, so will the need to move people around efficiently. This is important to both our workers and visitors in improving our transit system. Significant private sector investments are required to make the plans viable, and Brightline is that catalyst. I look forward to continuing the conversation about such public/private partnerships.”

The announcement of a new Brightline station coming to the OCCC was also welcome news for some business owners. Edgar Schaked, the owner of Chocolate Kingdom, said he welcomed a new mode of transportation and hopes it will help with the excessive amount of traffic, especially during large events, like MegaCon.

“The value of it is that you’ll have different choices of how to get to this area: by your own car, by train or other methods,” Schaked said. “So that way, you can move people around and not feel like it’s always congested.”

Meanwhile, even though the now-proposed South International Drive station is set to be close to Disney property, Soto said he believes the door is not closed on having the station take its place within the limits of Disney Springs.

He added that with federal attention from the Biden administration, as well as bipartisan cooperation on this rail expansion in the Sunshine state, he believes that there will be more opportunities down the road to bring in even more of Central Florida into these plans.

“Getting that first funding is a sign, along with my conversations with the Biden administration, that we’re in it for the long haul,” Soto said. “And we can expect many theme park workers to one day be able to take the SunRail to get to work or on the train along I-4, which we’re going to continue to work to expand as well down into Polk County and Osceola County, up through to Volusia County.

“So, all these things are part of an effort to give Central Florida commuters many options.”