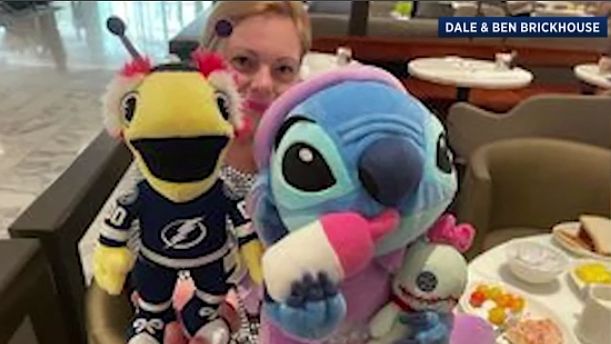 Ben and Dale Brickhouse lived in Tampa for over 30 years and spoke with us from Paris after the Lightning clinched the Eastern Conference championship.

Fans are still celebrating the Tampa Bay Lightning win over the weekend that sent them to a third straight trip to the Stanley Cup Finals.

The streets were packed with excited fans ready to see their Bolts to the finish line, but some fans say they celebrate more than the wins.

“I love the players. Their heart and soul and the good they do for the community,” fan Ben Brickhouse said from Paris. “And the ownership has done great things for the city of Tampa, thank you (Bolts owner) Jeff Vinik.”

Ben and Dale Brickhouse lived in Tampa for over 30 years.

Longtime @TBLightning fans Facetimed me from Paris with #ThunderBug!

The Tampa Bay Lightning is heading to the team’s third consecutive Stanley Cup Final after beating the New York Ranger 2 to 1 in the Eastern Conference Final at Amalie Arena over the weekend. @BN9 pic.twitter.com/GHvgV90XUQ

The Brickhouses face-timed with us from Paris over the weekend to share their excitement and their travel buddy – Thunder Bug.

Ben confirmed that their "Thunder Bug" goes with them everywhere.

“While we were in Colorado at Fort Collins, we had our Tampa Bay Lightning things out, our flags and Thunder Bug and we were approached by a man who started talking hockey," Dale said. "It turned out to be Scott Mayfield’s father, and Scott Mayfield is a bad word in the Tampa Bay community because he dirty cross-checked "Kuch" (Nikita Kucherov) and broke his ribs in our (2021) playoffs."

The Bolts will take on the Colorado Avalanche in the best-of-seven Stanley Cup Finals. Game 1 is Wednesday night in Tampa.