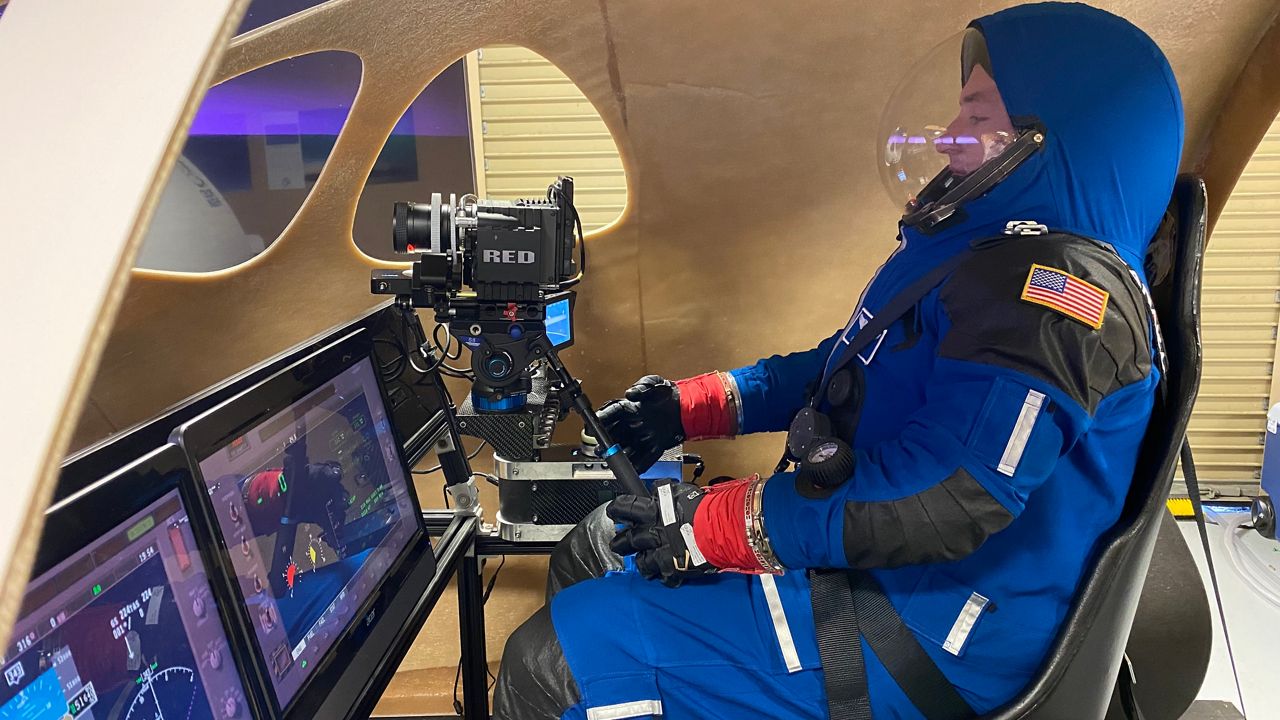 Brian Murphy, the 2021 Out Astronaut, prepares to fly in a Virgin Galactic flight simulator at Florida Tech. (Will Robinson-Smith/Spectrum News 13)

As the U.S. gets further into the era of commercial space activities and putting more people than ever into space, there remains a disparity regarding who is able to thrive in that arena.

A 2021 study published in the journal Science Advances looked at 21 STEM (science, technology, engineering and math) professional societies and found that “LGBTQ STEM professionals were more likely to experience career limitations, harassment and professional devaluation than their non-LGBTQ peers.”

The study also found that this group was “more likely to intend to leave STEM” and “reported more frequent health difficulties.”

Looking to tackle part of that challenge, institutions like the International Institute for Astronomical Sciences (IIAS), Project PoSSUM and Out to Innovate came together to help sponsor The Out Astronaut Project.

The program selects someone from the LGBTQ community to begin a three-phase course with the end goal of conducting a science mission aboard a commercial suborbital flight.

A recently graduated Florida Tech student, Brian Murphy, was chosen as the 2021 Out Astronaut. The planetary sciences major said this is an incredible opportunity to share his story and create a platform for others in the LGBTQ community.

“I was absolutely blown away because it was something that I was looking for for so long and I knew that I had to apply,” Murphy said. “I saw the opportunity to not only advance myself, but to advance others, to break these barriers that are intrinsic to STEM academic fields and professional fields.”

Phase two of the IIAS-structured program is advanced astronautics training, and phase three is the in-flight science mission.

Both IIAS and Out Astronaut were the brain children of Jason Reimuller, a Florida Tech alum himself and someone who also identifies as gay. He previously served in the Air Force and said he was twice selected as a “highly qualified” astronaut candidate by NASA, but didn’t make the final cut.

Creating space for representation has long been important to Reimuller. He and his friend Mark Bingham helped create what Reimuller described as the first rugby team for out and open men before Bingham was killed along with 39 other passengers on United Flight 93 in 2001.

The Bingham Cup was created in his honor the following year.

“Sport and STEM have a lot of similarities. They build bridges across cultures. They’re based on merit, not your influence of your money, and people relate to that. It bridges cultures and yet, we still have a lot to go in STEM,” Reimuller said.

The Out Astronaut Project hasn’t announced when it will take on another candidate, but Murphy said he wants to make the most of this platform. In April, he was in his home state of Maryland, where he joined representatives of the U.S. Mint to unveil the Sally Ride edition of the quarter as part of the “American Women Quarters” series.

“Sally’s legacy has inspired me time and time again to not give up, to reach new heights and be proud of who I am as an LGBTQ individual,” Murphy said at the April 21 event. “Ultimately, it was knowing her identity that gave me strength to apply to the Out Astronaut contest in 2021, which will allow me to walk in her footsteps as I train for suborbital spaceflight and advocate for LGBTQ acceptance worldwide.”