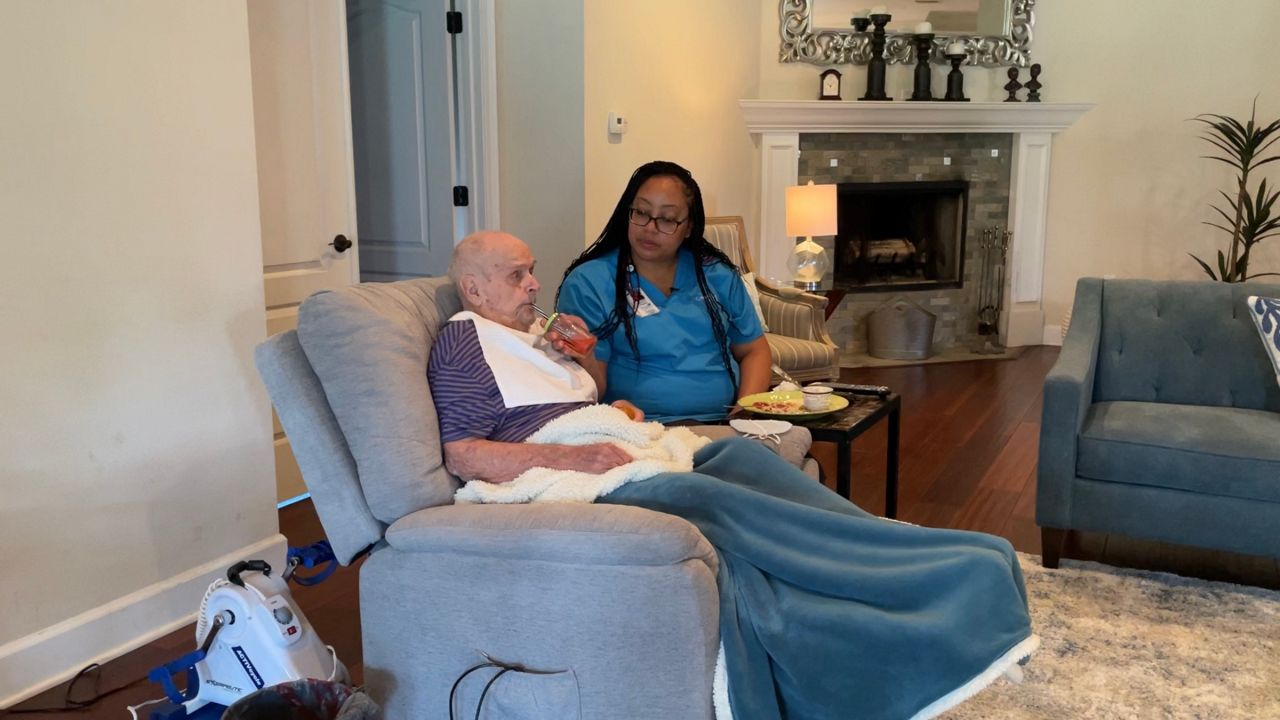 ORANGE COUNTY, Fla. – By 2030, all baby boomers will be over the age of 65, meaning one in every five people will be of retirement age.

In Florida, it’s one in three, according to the U.S. Census Bureau.

“I always wanted to be a nurse, but I also always felt like I would be more of a benefit working at home healthcare," Perrin told Spectrum News.

Her patient, Bill Meldrum, was diagnosed with a severe case of dementia, and he’s one of tens of thousands of people who rely on home health aides every day.

“This isn’t easy for the families to go through,” Perrin said.

The Florida Department of Economic Opportunity projects the Sunshine State will require over 100,000 home health aides within the next seven years as people continue to age and move here.

The Census Bureau reports over 2 million people moved to Florida in the last decade and more than 1,000 move to Central Florida on a daily basis.

While there’s a need for more home health aides, it’s becoming difficult for agencies to find workers or even keep them. Home Care Pulse, an organization that surveys and helps home care agencies, found last year the turnover for home health aides was over 65%.

“You’re a housekeeper, you’re a personal chef, you’re a companion,” she said. “You become a lot, you wear a lot of different hats.”

Perrin said it can take an emotional toll to work as a home health aid. “It’s easy to become attached,” Perrin said. “You try your best not to, because it is your job, but we’re human. We love people.”

She said the biggest reason many of her colleagues leave the industry is the pay. “It’s not a field that you’re going to become rich in,” Perrin said. “I’m very fortunate to have a really good job with my experience with a very great company.”

The average hourly wage of a home health aide varies from $10 an hour to a little more than $14 an hour. That’s an annual salary between $20,000 to $29,000 dollars a year, just slightly above the state’s minimum wage.

With the state’s minimum wage set to increase to $15 an hour by 2026, many in the home care industry worry it will cause more people to leave.

“With Amazon, Starbucks, and other large corporations paying $15-20 an hour as a starting wage and home care requiring high physical and emotional exertion, long hours, sometimes lengthy commutes, etc., it requires a special person who views this industry as a “calling” as opposed to a job. Not to mention, the COVID-19 Public Health Emergency (PHE) has also contributed because of safety/health concerns.”

Cindy Gray, ComForCare Orlando Owner, said in order to recruit and retain home health aids, they offer benefits such as paid time off, cover insurance costs, take care of employee taxes, and worker’s compensation. Gray said they pay as much as $600 in overtime per pay period, which allows the caregivers to earn more. Gray said they care for each other as if they were family and she goes out of her way to make sure her employees feel they're as important as the clients.

Perrin has worked with ComForCare for more than three years, and she’s quickly moved up within the company. She’s become an ambassador, which means she works with clients and other home health aids to ensure the best care is provided.

Perrin has had to pick up more shifts over the last few months as some of her coworkers decide this job isn’t for them.

Even so, Perrin doesn’t see herself leaving anytime soon.

“The thing that gets me up is I’m going to go to work and take a load off of a family member that has such a heavy weight on their shoulders,” she said.

Since the start of the pandemic, Home Care Association of Florida reports at least 190 Florida home health agencies have shut their doors.