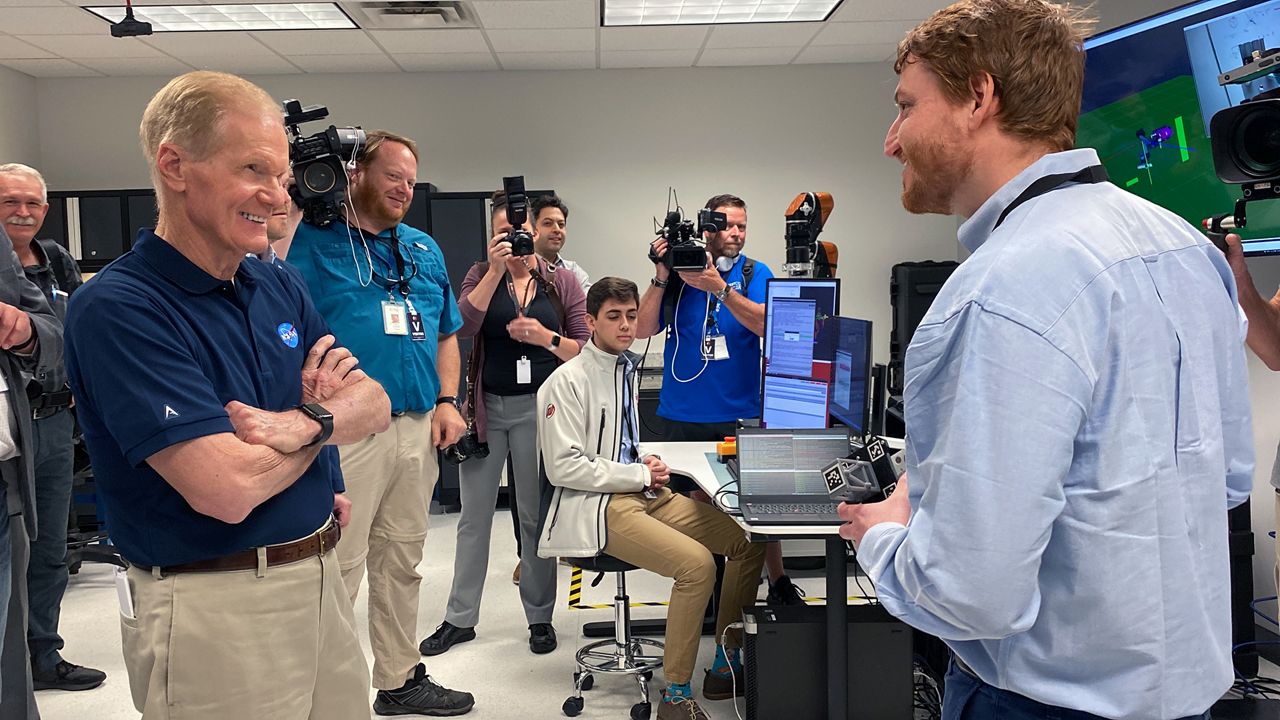 A Florida-based company is gearing up for a demonstration of how a spacecraft can assemble itself while in orbit, and is aiming to launch the capability next year.

On Tuesday, NASA Administrator Bill Nelson stopped by Redwire Space (NYSE: RDW) in Jacksonville to get a firsthand look at the hardware that’s coming together for the On-Orbit Servicing, Assembly and Manufacturing 2 (OSAM-2) mission. It will show how a spacecraft can use additive manufacturing, or 3D printing, to create and assemble components in space.

In the case of OSAM-2, otherwise known as Archinaut One, the craft will create a surrogate solar array.

“You could never bring enough material and you could never anticipate exactly what you’re going to need, especially when you get the Moon and subsequently to Mars,” said Peter Cannito, the chairman and CEO of Redwire Space.

The visit was Nelson's second to Redwire Space and the second stop on a 2-day public visit to Florida for the administrator. On Monday, he spent time with elementary school students at Ventura Elementary School in Kissimmee.

To say I’m OVER THE MOON 🌙 is an understatement🚀 Thank you Tigers for giving Administrator @SenBillNelson & Astronaut Dominick a ROARING WELCOME! Thank you to NASA & @RepDarrenSoto ‘s teams💫 I hope today inspired our Tigers to dream BIG & never give up 🚀 🌟#SDOCGoodtoGreat pic.twitter.com/NVH2GITZQZ

This contract design was introduced in 2015 with the goal of helping to spur private industry into working on advancing technologies that will be beneficial to NASA and other U.S. interests in the long term.

All contracts awarded are firm-fixed priced contracts with milestone payments and require the recipient contribute at least 25% to the total proposed cost. Following his tour of Redwire Space on Tuesday, Nelson emphasized that NASA will be shifting more toward these types of funding structures to best utilize taxpayer money.

“We’re getting serious about cutting down on these exponential cost explosions, simply because it’s not right," Nelson told Spectrum News. "You’ve got to spend the taxpayers’ money in the best way possible, and that’s why I’m insisting on more and more fixed-price contracts.”

NASA defines technologies that would qualify under the “tipping point” umbrella if the launch and demonstration meet the following criteria:

Made In Space, Inc., another company that received "tipping point" funding, was awarded a $73.3 million contract in 2019. The company was acquired by Redwire Space and its former president and CEO, Andrew Rush, became the president and chief operating officer (COO) at Redwire Space.

Part of the capability that Redwire Space is trying to prove is the ability to effectively 3D print structures that will reduce the initial cost of launch, further reducing the barrier to entry for future missions.

The company is using a type of high heat-resistant plastic in the printing called Ultem. On Tuesday, Nelson was shown a sample of how the beams supporting the solar array would be designed and printed.

He was also shown how the plastic material would be sent to space: Wound on a spool, slightly larger than the width of a basketball, the material feeds into the printer to manufacture a 50-foot structural beam to support the solar array.

“When you optimize for that microgravity environment, really all you need to account for are the natural vibrational nodes from the solar thermal environment," said Justin Kugler, the general manager of Redwire Space’s In-Space Manufacturing and Operations division. "So, it doesn’t have to carry weight, it doesn’t have to carry heavy loads. We just need to keep it pointed in the right direction.”

Redwire Space is no stranger to creating innovative solar arrays alongside NASA. The company developed the Roll-Out Solar Arrays (ROSA) over many years of development. The first pair for the International Space Station is currently installed and in use.

For the 3D-printed structure beams, Redwire Space is using an in-house vacuum chamber to help simulate the low Earth orbit environment that these structures will operate in during the demonstration.

Instead of launching two printers as part of this mission, the company is opting to send only one and will use a robotic arm to move it from one part of the spacecraft to another.

Following the demonstration of this capability during the OSAM-2 mission, Rush said that they have big ambitions for this technology and how it can be used.

“We’re looking to inject this into commercial missions and national security missions and into a wide variety of NASA missions,” Rush said.

The undertaking by Redwire Space is similar to the technology that will be demonstrated as part of OSAM-1, which is being developed by Maxar Technologies of Westminster, Colo. That mission will “robotically assemble a communications antenna and manufacture a spacecraft beam in orbit,” according to NASA.

The OSAM-2 mission is set to launch in 2023 aboard a SpaceX rocket.

Paul Shestople, the mission’s project manager, said it will be up to SpaceX to decide if it will be a part of a Falcon 9 or a Falcon Heavy launch, but noted that it will be integrated onto a Blue Canyon Technology (a subsidiary of Raytheon Technologies) bus to be flown as part of a rideshare mission.