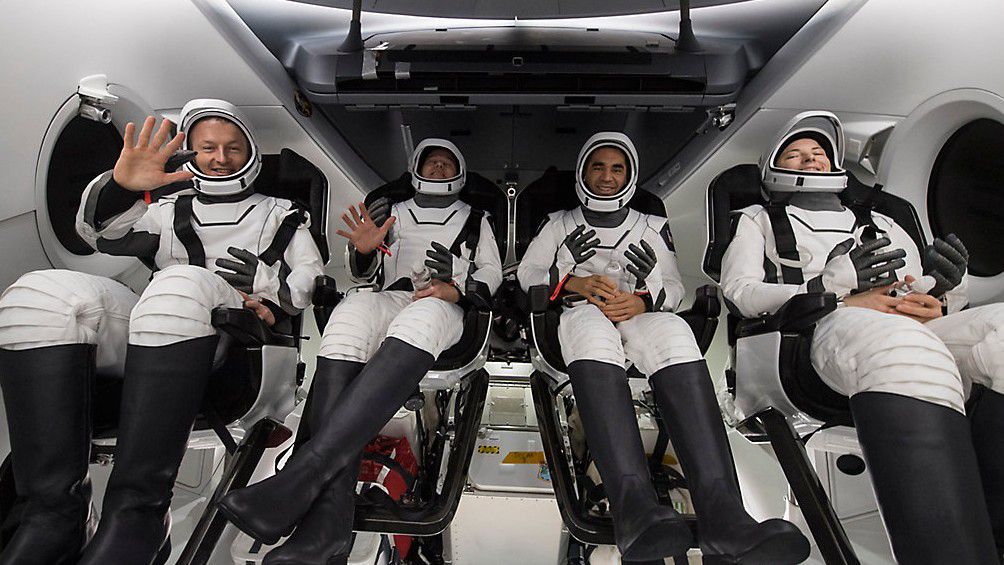 European Space Agency astronaut Matthias Maurer (from left), NASA astronauts Tom Marshburn, Raja Chari, and Kayla Barron, are seen inside the SpaceX Crew Dragon Endurance spacecraft onboard the SpaceX Shannon recovery ship shortly after having landed in the Gulf of Mexico off the coast of Tampa on Friday. (NASA/Aubrey Gemignani)

After Crew-3's splashdown near Tampa, SpaceX and NASA turn focus to future missions

FLORIDA — After a nearly six-month stint aboard the International Space Station, the astronauts of the SpaceX Crew-3 mission returned to Earth on Friday morning.

The Crew Dragon Endeavor spacecraft splashed down off the coast of Tampa at 12:43 a.m., ending a 177-day mission for the four astronauts.


“It’s always a huge relief to see those drogues deploy and seeing those four main (parachutes) unfurl so beautifully,” said Kathy Lueders, the associate administrator of NASA’s Space Operations Mission Directorate. “I’m so thrilled that we can once again safely hand over a crew to their friends and family.”

The #Crew3 mission is officially complete!

After launching from Kennedy on Nov. 10, 2021, @SpaceX's Dragon Endurance splashed down off the coast of Florida today at 12:43am ET, bringing @Astro_Raja, @AstroMarshburn, Kayla Barron, and @Astro_Matthias home: https://t.co/wGNaM6g04x pic.twitter.com/48fiA9sNca

The operation capped off a historically busy month for SpaceX when it came to human spaceflight. The company launched and returned four private astronauts for Axiom Mission 1 for Axiom Space. It also launched the four Crew-4 astronauts to the International Space Station in partnership with both NASA and the European Space Agency (ESA) as part of the Commercial Crew Program (CCP).

SpaceX also managed to fit in three Starlink launches and a mission for the National Reconnaissance Office between all those activities. During a post-splashdown media teleconference, Bill Gerstenmaier, the vice president of build and flight reliability for SpaceX, said the company relies on having multiple teams being able to run in tandem.

“I think this is a great time to be in spaceflight and think we’re poised well as a company to support these multiple activities and our heads not swiveling around,” Gerstenmaier said. “We’re really focused on each individual activity, and we can accomplish them one at a time.”

The splashdown of Crew-3 comes less than two years after the first flight of a Crew Dragon spacecraft with humans on board with the Demo-2 mission in May 2020. It is also just shy of the 10-year anniversary of the SpaceX COTS (Commercial Orbital Transportation Services) Demo Flight 2 (COTS 2). That mission was the second test flight of the uncrewed Cargo Dragon spacecraft in May 2012.

“At that time, we knew at least for cargo, we had to make it happen. So, it was really about us being able to have that core capability. It’s really what enabled the science,” Lueders said. “For me, it’s just been so much fun to see how much we’ve learned from that first mission and evolved as a team, the way we’re doing missions now.”

As of now, the four Crew Dragon spacecraft are each aiming to be certified for five flights each. Gerstenmaier said on Friday morning that the company is working with NASA on that and hopes to be able to fly them beyond that five-flight goal.

SpaceX also has a fleet of Cargo Dragon spacecraft that bring science and supplies to the ISS. Here’s where those capsules stand:

Gerstenmaier said SpaceX doesn't plan to build any more Crew Dragon vehicles for the time being and has one more Cargo Dragon that is currently being manufactured at its facility in Hawthorne, Calif., presumably, C211.

“We have a pretty extensive spares program of major components that we can rapidly put together into another capsule or used to outfit pieces of capsule that are needed,” he said. “You know, we’ll continue to work with NASA, see what the future is, work with the private companies, such as Axiom, and see what the demand is.”

NASA will now turn its attention to its other CCP partner: Boeing. The uncrewed second orbital flight test (OFT-2) of the Starliner spacecraft is set for launch on May 19 from Space Launch Complex 41 at Cape Canaveral Space Force Station.

Steve Stich, the manager of the CCP program at Kennedy Space Center, said that the Crew-4 astronauts are preparing for the arrival of Starliner and will retrieve the cargo it brings up once it’s docked. They will also perform a few tests of the capsule.

That launch is set for May 19.

Join the journey as teammates rolled #Starliner out of our factory to @ulalaunch's Vertical Integration Facility. Starliner is stacked on the #AtlasV that will launch it on Orbital Flight Test-2 for @Commercial_Crew.

Teams are excited for the world to see the launch on May 19. pic.twitter.com/I1Alqqkp9f