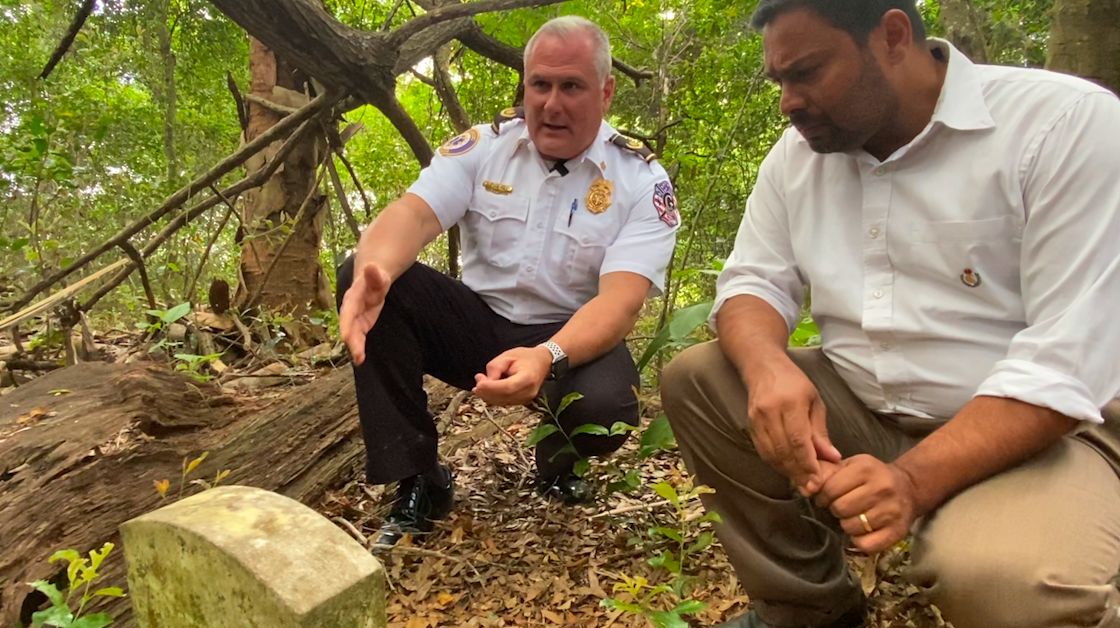 GROVELAND, Fla. — Last year the state of Florida created the "Abandoned African American Cemeteries" Task Force. It came after the city of Clearwater built over a forgotten African American cemetery, creating outrage in the community.

Groveland Fire Chief Kevin Carroll's office is trying to ensure that people can see that history when they walk through it.

“I think it’s in my DNA to be a servant to the people. That’s what I’ve been doing for 34 years,” Carroll said.

When Carroll found out there was an abandoned African American cemetery in Groveland, he knew he had to do something.

"The best to our knowledge, we know it started around 1895 and the 1900 area. As legend goes, Mr. [Elliott] Edge donated a 1.25-acre piece of land to the African American workers here to go ahead and bury their loved ones," Carroll said.

Edge was one of the early settlers of then-Taylorville, better known now as Groveland.

"Mr. Edge had all of these files of who was buried in this cemetery in a box in a barn," Carroll said. "But it was being eaten by the rats, then put into a burn pile and disposed of. So a lot of what we’re trying to find and uncover… you almost have to be a detective."

Carroll’s first case is taking him all over Lake County. But he’s not alone — his partner in crime, Groveland Human Resources Director Deo Persaud, is right by his side. They say they need the teamwork because the actual burial grounds haven’t been kept up in decades.

"An invasive species of trees that are literally spreading everywhere are taking up the natural environment," Persaud said as he walked through an overgrown area.

Underneath are about 70 souls whose burial site was forgotten — including a headstone that reads, "Henry Spellman, a World War I veteran."

"Those of us in public safety or in the military without the logistical people doing what they do and bringing the equipment and supplies that we need, nothing really gets done," Carroll said.

That’s the point of the project, bring dignity and respect to these people who were mistreated even after their deaths.

"This is not just the city of Groveland project, the excitement within the community and the stakeholders in the community is unprecedented," Persaud said. "Everybody wants to get this done."

But even with the state’s funding, there’s a lot of work to be done before the restoration process begins, the amount of invasive species and trees that need removal being one. While this project will take years to complete, both men are willing to take the time to preserve it right.

"It brings sadness when you walk through here, but I think what director Persaud and myself are doing and the community and the city is doing is taking that sadness and redirecting it and using that towards our passion," Carroll said.

Groveland was awarded a little less than $500,000 to restore the cemetery from the millions set aside by the state. People interested in donating any resources or time to the project should contact the city of Groveland.