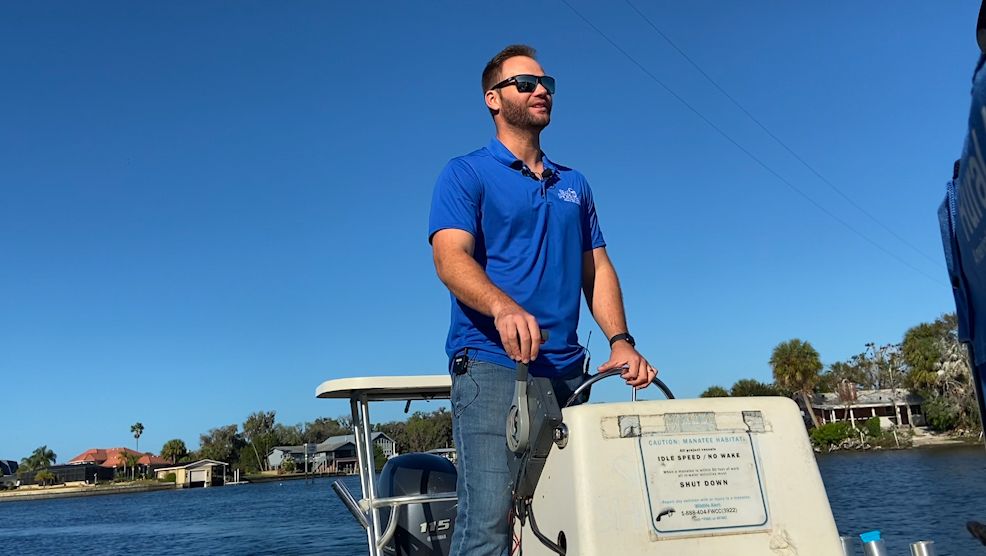 CITRUS COUNTY, FLA. — As their seagrass food source dies out, so do the manatees across many coastal Florida habitats. However, there’s a fix in sight. One wildly successful restoration project near the west coast is now looking to grow on the east coast to include the Indian River Lagoon, too.

That’s all the more reason, to Ryan Brushwood, to keep growing the seagrass that’s so important to sustaining manatee life.

The marine biologist has been growing Eel Grass for several years now, at Kings Bay in Crystal River, for the ‘Sea & Shoreline.’ So far, the team has done 50 acres. Hopefully, there will be even more by 2023, the goal for the project’s completion.

“It’s so exciting for me, I mean I love to talk about it I love to be out here,” Brushwood beams.

The Florida native and avid angler is proud to show-off the thick forests of seagrass beneath his boat on Kings Bay.

The work here hasn’t been easy. Not only does he have toil and trouble of planting, but he’s even had to cage some of the infant plants to prevent manatees from picking them off too soon.

“They’d wait for it, and push their little noses and as soon as a plant would grow outside they would munch on it,” he laughs.

Now, there’s plenty to munch on. After all, the Crystal River area is known for the thriving manatees that flock to the springs each winter.

That’s something one Bethune-Cookman University graduate student is hoping to duplicate, on the other side of Florida. Gerardo Arguello’s thesis project takes him traipsing through the Indian River Lagoon in Melbourne Beach.

There, he’s planted another type of seagrass he hopes will have as much success as Brushwood’s has. Brushwood’s helped him, too.

“Do we see any chutes in here?” Arguello surveys the planting space’s progress, “just one?”

“We won’t know if it’s there until further into the growing season when we see the chutes and the blades start poking out through the muck and the mud,” Arguello gestures to the thick mud below the surface.

“I’ll be honest,” Brushwood recalls, “at the beginning I think like a lot of people I was a little nervous. There were a lot of sleepless nights.”

Those paid off for him and his team, though. Project Biologist Jessica Mailliez has been working alongside him, and now gets to feed some of the excess seagrass shed to rescued manatees.

“Not everybody gets to do something that is so rewarding and is so special, near and dear to their heart,” Mailliez glows as she piles some 800 pounds of it into buckets for the manatees’ meals.

“The goal here is to make sure we can continue restoring these habitats,” she adds.

The trio hopes the seeds of success will continue to sprout both near and far.