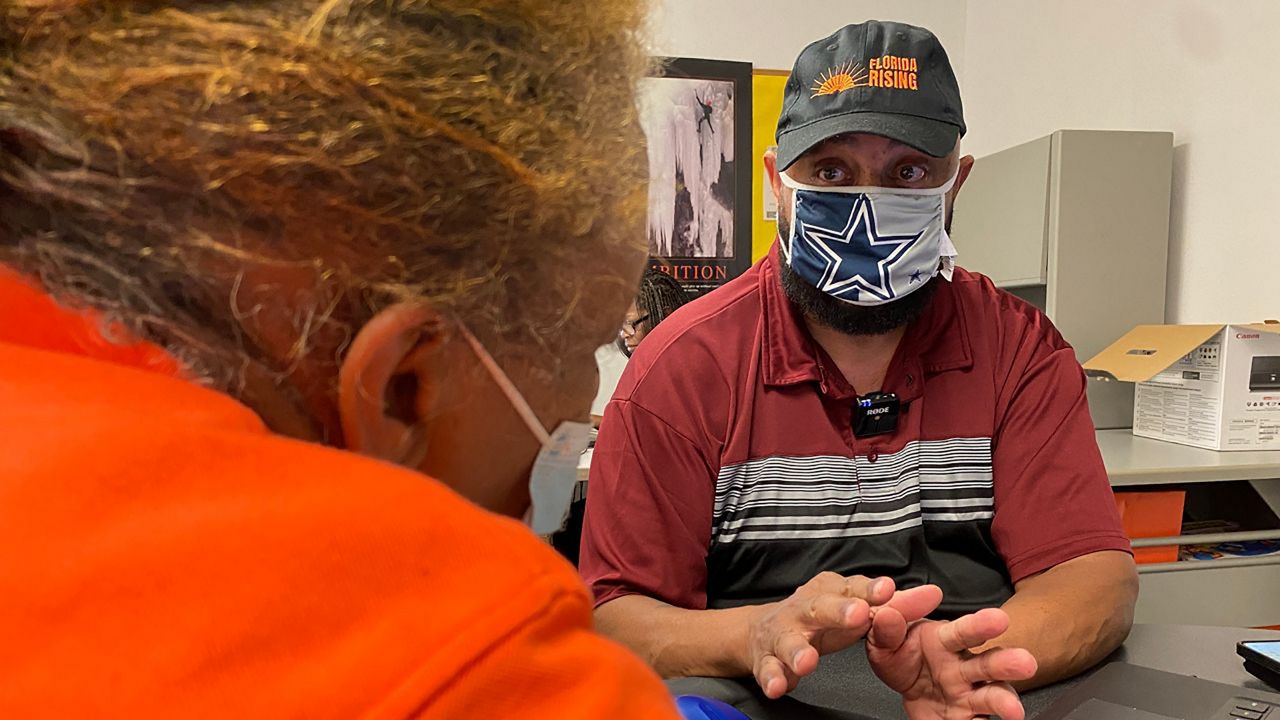 In response to Florida's affordable housing crisis, this Sanford advocate is drafting a tenant's bill of rights

SANFORD, Fla. — Last year, when Elton Lassiter moved into his two-bedroom Sanford apartment, he met the community’s income requirements. Now that his monthly rent is increasing by $325, he doesn’t.

“That doesn’t make any sense to me. If we live here, the rent shouldn’t go up so much that we don’t qualify any longer,” Lassiter said. “I don’t remember getting a raise of $300 a month this year.”

Lassiter, a community organizer with Florida Rising, works closely with lower-income Central Floridians who need help keeping themselves and their families afloat. He’s familiar with the struggle of trying to make rent. Now, he’s facing that struggle firsthand himself.

Florida law preempts local governments from enacting rent control measures. It’s the same in a majority of U.S. states, according to the National Multifamily Housing Council (NMHC). During this past legislative session, a proposed rent control bill from State Sen. Victor Torres (D-District 15) died in committee for the second year in a row.

But right now, Lassiter says he’s working with fellow advocates on another possible, hyper-local solution to housing unaffordability: a tenant’s bill of rights.

The Sanford-focused initiative draws on other similar ordinances Lassiter says advocates have successfully enacted in different parts of the state, like Hillsborough County. A landlord registry, a minimum six-month’s notice for any rent increase above 3%, and better access to legal representation for renters facing eviction are among the things Lassiter says he’d like to see in a local tenant’s bill of rights.

The protections would likely be a welcome respite for many of the renters Lassiter meets at local Emergency Rental Assistance Program (ERAP) events, where he helps them apply for federal aid through programs like OUR Florida.

For many renters, the ERA funds are a lifeline, their last hope at avoiding homelessness, but for some, the programs haven’t worked. Layers of confusion about what’s allowed and what isn’t at federal, state and local levels have, for many eligible applicants, delayed or even stopped them from getting help they desperately need.

With rents rising, so is tension for folks who were already living on the edge.

“Once you raise the rent this drastically, you’re forcing people out of their homes, and that’s not right,” Lassiter said.

With Florida rents rising more dramatically than anywhere else nationwide, some state lawmakers have urged Gov. Ron DeSantis to declare a state of emergency for housing affordability. Such a declaration would activate the state’s price gouging protections, which prohibit setting “unconscionable prices” for essential commodities — including dwelling units — during a declared state of emergency.

He's called upon the governor to declare a state of emergency for #housing affordability. That would trigger state consumer protections that could halt the rent hikes many Floridians are seeing of 30%++. https://t.co/cjEDPNkVC8

But so far, the governor hasn’t indicated he’d make such a declaration. He blames Florida’s current housing crisis on the enormous federal spending bills passed in response to COVID-19, as well as the CDC’s now-extinct eviction ban, according to the governor’s spokeswoman Christina Pushaw.

“Federal government policies are not the only cause of rising rents, but they have been factors driving rent hikes nationally, including in Florida,” Pushaw wrote in an email to Spectrum News 13.

She added another factor is all the people moving to Florida from elsewhere — particularly expensive areas, like New York — and scooping up available housing.

“There’s only one way to bring down the rents in a sustainable manner without adverse consequences: Encourage the construction of more housing,” Pushaw wrote.

“Florida cities and counties, especially in densely populated areas near the coasts, have strict regulations on new home and apartment construction,” Pushaw wrote. “Of course, many of these regulations may be necessary for safety reasons, but there also may be opportunities for city and county officials throughout Florida to consider ways they can streamline the permitting and building processes to attract more development that would increase the stock of housing.”

The legislature’s final budget for the upcoming year includes almost $363 million for affordable housing programs: the fourth-largest allocation ever, according to the Sadowski Housing Coalition. Some of that money will be used to help offset development costs for new affordable housing construction, which will help balance out supply and demand.

But construction takes a long time, and in the meantime, many Floridians can’t keep up with the extreme rent hikes.

'You don’t even have a dog in the fight'

Lassiter, who used to be a landlord himself, takes issue with the idea that eviction bans are responsible for spiking rent.

“Unfortunately, COVID-19 was not the fault of the tenants. It affected everyone,” he said.

While he understands renting out property is a business, and owners must prioritize their bottom line, Lassiter doesn’t think renters should be punished for suffering financially during a global pandemic that was out of their control.

Instead, Lassiter says, renters need more protection — especially in Florida, where evictions move quickly, giving a renter just three days to cure a past-due balance before their case moves to court. Once it rises to the court level, the renter will automatically lose – without a hearing — unless they can pay the full amount of back rent their landlord claims they owe.

“The landlords have the power in that scenario,” Lassiter said, a sentiment local legal experts have also echoed. “When most people get behind, they don’t have the money, so they can’t put the money in the (court) registry … and you don’t even have a dog in the fight at that point.”

Long before the pandemic began, experts ranked Florida one of the worst places in the nation for housing affordability. And last year, four percent of all the people staying in U.S. homeless shelters on a given night were in Florida, according to HUD.

“I think they should be putting more things in place for tenants that are having financial issues, to allow them more opportunities to stay in their homes,” Lassiter said. “Because we really don't have enough places to house people when they’re evicted or become homeless.”