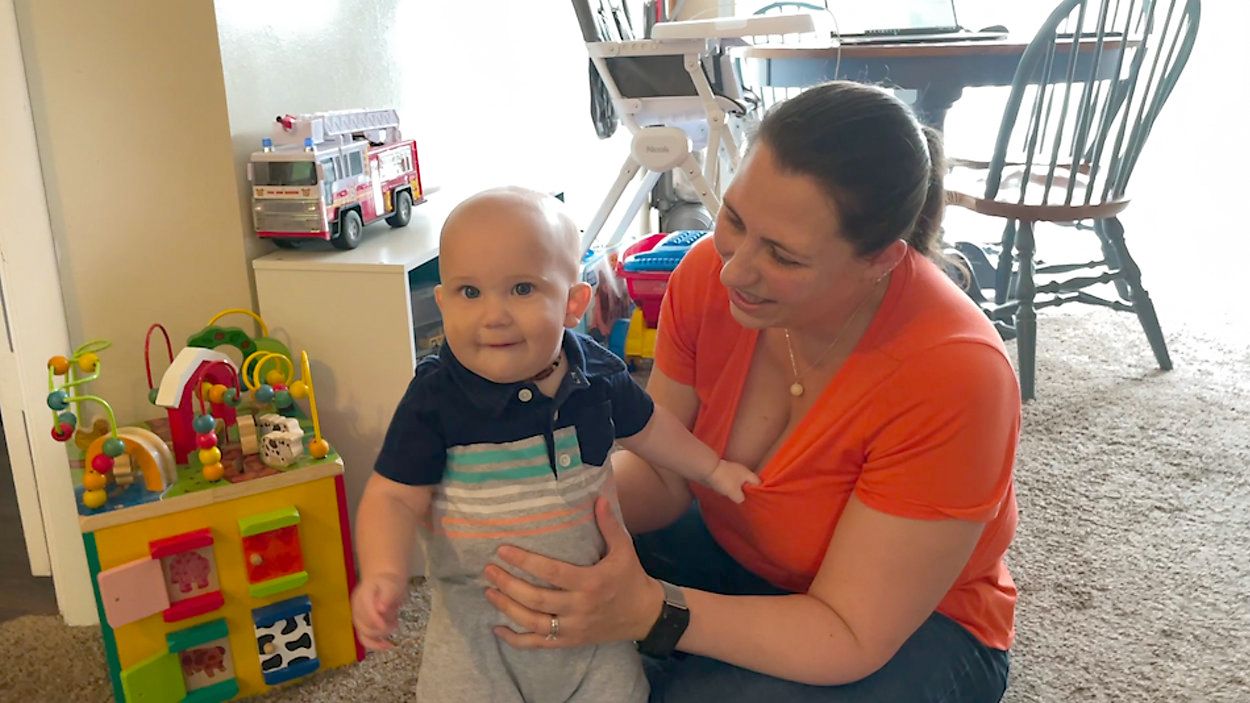 Danielle Tallafuss says there were no major issues when she was pregnant with her son Alex, but she said she had to end a previous pregnancy because the baby had a fatal heart defect. (Spectrum News 13/Jeff Allen)

Throughout women’s history, some women see the U.S. Supreme Court's Roe v. Wade decision in 1973 as advancing the progress they have made because it gives them more of a say over what decisions they can make when it comes to reproductive rights.

But some state lawmakers across the country have enacted legislation — including a bill recently passed by the Florida Legislature  — that could end up chipping away parts of the landmark Supreme Court decision.

The Florida law — which only needs Gov. Ron DeSantis' signature to become law — would prohibit abortions after 15 weeks. State law currently allows abortions up to 24 weeks.

Danielle Tallafuss has only a set of footprints and ultrasound pictures of her baby Nathaniel.

It was about 20 weeks into the pregnancy that she and her husband found out some bad news: The baby’s heart didn’t develop properly and even with multiple heart surgeries, there was no guarantee he’d survive.

They made the incredibly difficult decision to abort the pregnancy.

“He was my baby, and because I loved him, I gave him the peace that I could,” said Tallafuss.

It’s a decision she said they wouldn’t have been able to make if the proposed Florida law had been in effect at the time.

Some women, though, welcome more protections for the unborn, saying that makes a women’s place in society more powerful.

One of those is Irene Sandler, who stands and walks out in front of a Planned Parenthood office near the University of Central Floirda once a week. She puts crosses into the ground to represent babies she said had been aborted at the facility.

“They never had a life and they’ll never have a funeral, so I believe in some small way I’m honoring the babies,” said Sandler.

Sandler is Catholic and describes herself as very religious.  She regularly prays the rosary, which is something she said gives her strength as she hopes to convince women to seek alternatives to having an abortion.

“Really, to alert the community that this is right here and that they can do something about  — they can try to reach out and help the women,” said Sandler.

Sandler has three sons and said she believes her role as a mother is the most important job she’ll ever have. She argues that reducing women’s options for getting an abortion will put them in a more powerful position and increase respect for them among men.

“I think guys always expect in the back of their minds  — I’m not going to have to be responsible here because she can just get an abortion if birth control fails,” said Sandler. “And that does not increase his respect for her.”

Tallafuss said that after losing Nathaniel, they had a healthy pregnancy with Alex, who is now 9 months old and just learning to crawl.

“Everything with him went just perfectly,” said Tallafuss. “We had a lot of extra doctors appointments to do some in-depth scans just to make sure everything was fine.”

Tallafuss said if DeSantis signs the legislation into law, she worries that families would not be able to make the same decision she and her husband had to make.

“The families that you have now excluded between 15 weeks, and the legality of Roe v. Wade, are the families that are in my type of situation, where it is a medical call, a quality of life call,” she said.

Tallafuss said Alex is a great little brother for her 2-year-old son, Ben, who was adopted from her sister-in-law, who wasn’t able to care for him, before they became pregnant with Nathaniel.

“No one in this world loves Nathaniel more than his father and I, so in making this decision, it was the most loving and peaceful decision we could give to our child,” said Tallafuss. “I’ll live every day with a broken heart so he doesn’t have to.”

The U.S. Department of Health and Human Services advises women who become pregnant to seek the advice of a doctor for any medical decisions they may have to make.

Additional resources can also be found by going to the U.S. Department of Health and Human Services website.