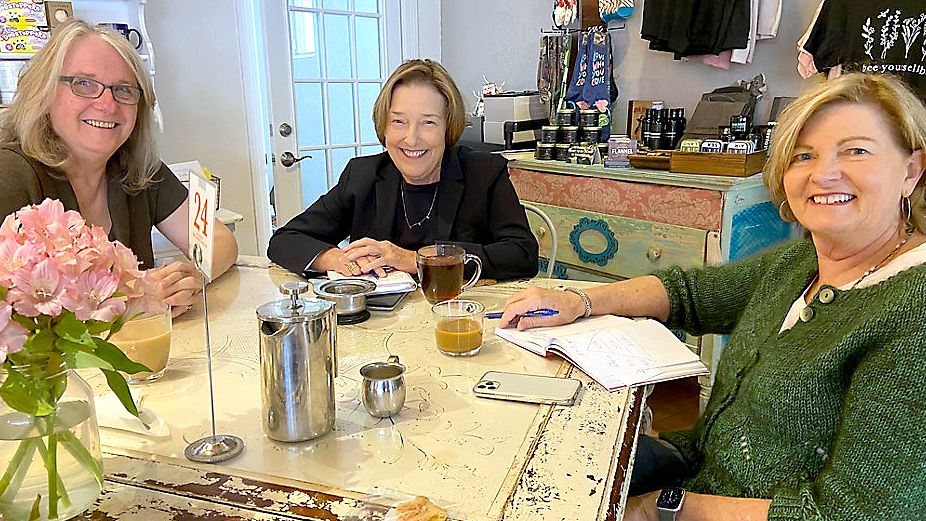 Theo Webster (left), Barbara Lanning (center) and Sue Gilman catch up over a cup of tea and cookies to discuss what issues they want the League of Women Voters of Orange County to focus on. (Spectrum News 13/Stephanie Coueignoux)

ORLANDO, Fla. — As part of covering Women's History Month, Spectrum News 13 spoke with members of the League of Women Voters of Orange County to learn how members work to educate and engage Central Florida voters.

Co-president Barbara Lanning’s journey into political advocacy began when she was a little girl growing up in rural Kansas. Her father was a precinct committeeman, her mom worked at the polls during elections.

As a child, Lanning soaked it all in from the sidelines. Now? She’s front-and-center, empowering voters on the issues.

"I think in these times, we are nonpartisan so when we research issues and talk, it’s strictly based on fact," she said.

The League of Women Voters Orange County is an all-volunteer organization that requires not a passion for politics, but participation and perseverance.

The last one is very much near-and-dear to Lanning's heart. While she shies away from the label of “feminist," she said she believes female empowerment and equality are essential to an engaged community. And during a critical midterm election season, the female vote is critical.

Lanning became involved because of the 2016 elections, knowing how critical it was for voters to be informed about the issues to make the best choice for themselves on the ballot. Now, she and co-president Sue Gilman are gearing up for another big election year.

“We want the voters to understand what redistricting will do as far as their representation," Lanning said. "We want them to understand issues and how they impact them. If you are thinking about voting for or against the transportation, you need to know why you will be voting and what effect it can have on you."

For both women, they are doing what they can to step up and stand up for women in politics.

“It’s been very heartening to see the number of women in political office in all levels, and I think that there are so many women activists doing great work in nonprofits and other areas," Lanning said.

For these two, they say it's more than a mission, it's a movement.