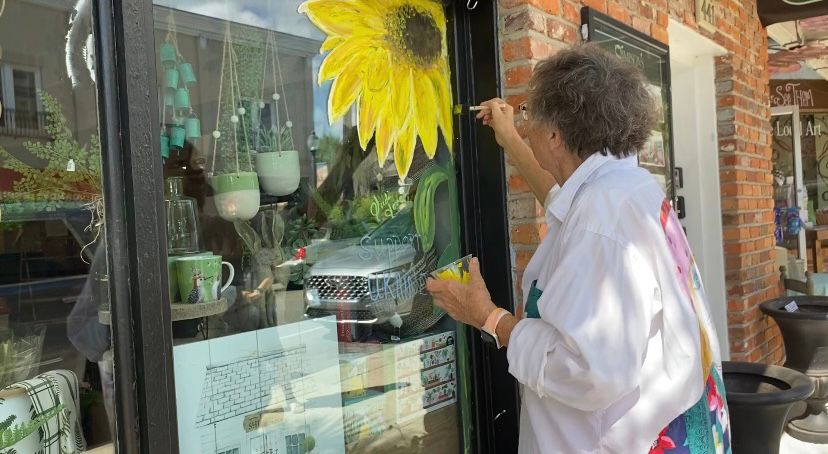 MOUNT DORA, Fla. – As the war in Ukraine continues, many people in Central Florida are looking for ways to help. In Mount Dora, artists near and far are coming together standing in solidarity with Ukraine.

Born and raised in Mount Dora, Judi Jones never thought of herself as an artist. She started learning how to paint after she retired.

"I was a professor, then a research scientist and they (my friends) thought who knew. I said I know, I never tried, so I never did. But I just love it, I really do," said Jones, a Mount Dora Artist.

She said one the thing that changed her perspective was the community of artists in Mount Dora being so supportive of her new venture.

''Mount Dora, its slogan is ‘Some Place Special’ and it really is because if anyone needs something, if anything happens in this town they just rally,'' said Jones.

Jones said the residents always come together no matter how far the issue may seem. With the conflict between Russia and Ukraine, Mount Dora residents did what they do best rallied.

"Everyone has just embraced it so much. So many of the artists in town got involved. But more importantly, all the merchants want to be involved. They want a sunflower on their window. They want to support the Ukraine. That’s what Mount Dora has been about. It’s this little jewel town of fabulous people who step up when it matters," said Jones.

Mount Dora resident Jeanette Bokland is the brains behind the project. She told Spectrum News 13 it’s grown into something more than her imagination.

''The tourists that came down here and are visitors loved it. And they started giving us donations. We’re collecting donations and giving those to a group in Apopka,'' said Bokland.

''A Ukrainian woman was offering sunflower seeds to a Russian soldier. In a way that said, well at least if you die here, something good will grow,'' said Bokland.

Now with Mount Dora covered in sunflower paintings, they hope it sheds some light to the international issue.

The City of Mount Dora has already raised over $1,000. If you wish to donate, head over to World Central Kitchen.