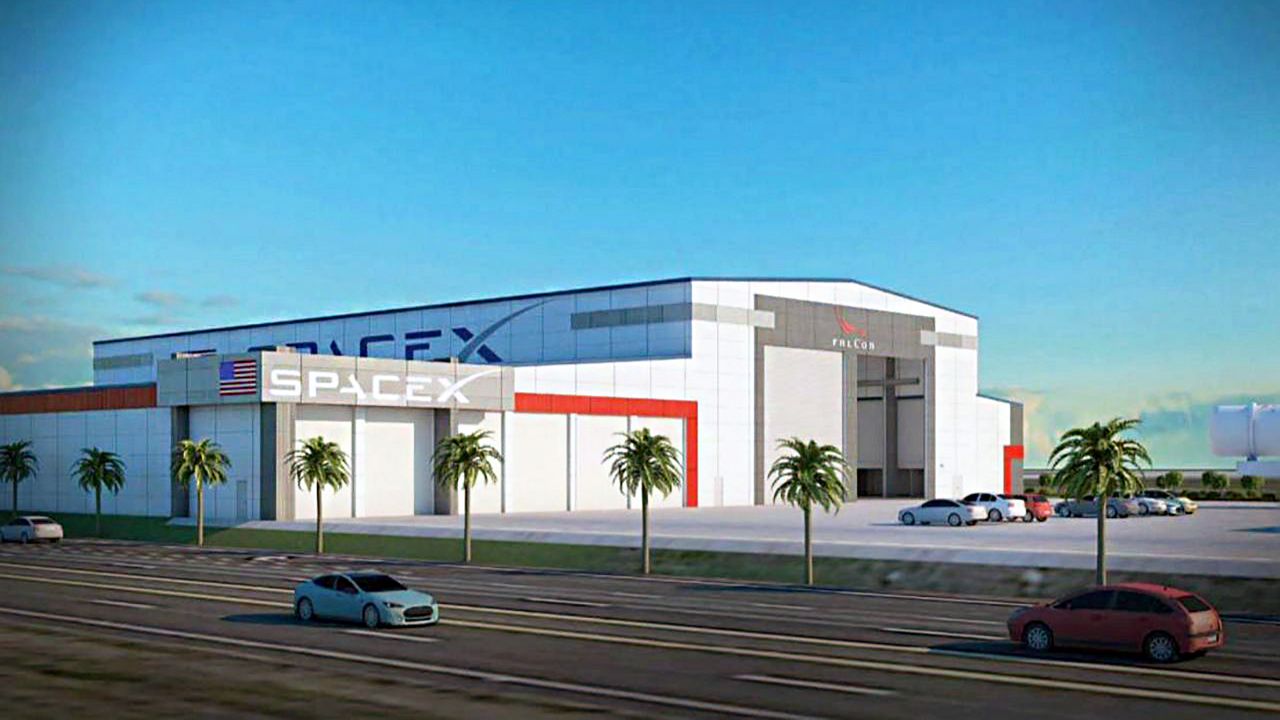 This conceptual SpaceX hangar for Falcon maintenance and storage was created in 2018 for a draft environmental assessment of SpaceX's operations area at Kennedy Space Center. (NASA)

BREVARD COUNTY, Fla. — The Brevard County Commission unanimously approved a public hearing on a permit request by SpaceX, which wants to build a wastewater treatment facility.


A representative from SpaceX may soon offer some additional insight into the company’s planned developments at the Kennedy Space Center after the Brevard County Commission voted 4-0 on Tuesday to request a public hearing from the Florida Department of Environmental Protection.

The agency is overseeing a permit request from the California-based company, which is seeking to develop a wastewater treatment facility that “would discharge 0.003 MGD of non-process wastewater to Oyster Prong, a Class II waterbody within the Indian River Lagoon Outstanding Florida Waterbody.”

Nathan Slusher, a Titusville resident and chair of the Libertarian Party of Brevard County, said he was alarmed by reading the notice of the draft permit, which did not elaborate on what that discharge would contain or what mitigating factors SpaceX would implement to ensure that the Indian River Lagoon would not be negatively impacted.

The draft permit was created on Feb. 2, 2022, and published two days later on Feb. 4, in the Hometown News Brevard newspaper.

“And that was all the information on the public notice, requesting us to reach out to the DEP to request a public hearing if we wanted more. And at that point, I realized that I definitely needed more,” Slusher said.

He helped draft letters to both the City of Titusville and the Brevard County Commission, hoping to make them aware of this permit request if they were not already.

According to the draft proposal, the wastewater treatment facility will support what the documents dub “Hangar X,” which is located at the intersection of Roberts Road and State Road 3 on the KSC property on Merritt Island.

It would consist of a 68,563-square-foot hangar, a 109,139-square-foot office building and two wet detention ponds on the west side of the area. There will also be three cooling towers to provide air conditioning, two of which would be primarily used, with the third as a backup.

The draft permit states that “municipal water will be cycled over the heat exchanger coils multiple times prior to discharge into the on-site stormwater ponds. During this process there is not an exchange between the municipal make up water and the process water.”

SpaceX submitted the application for a State of Florida Industrial Wastewater Facility Permit back on Dec. 15, 2021.

In addition to capping the maximum daily flow at 3,000 gallons per day, the draft permit states that SpaceX will use a ProMoss filtration system, which uses Sphagnum moss to “improve water quality during cycling.”

The document notes that “the ProMoss filter will absorb positively charged ions like iron, manganese, calcium and zinc and stabilizes the pH of the water.”

The draft permit also includes a breakdown of surface water discharges that need to be monitored and the limits that SpaceX is not allowed to exceed. It also outlines the schedule for monitoring the water and how that data needs to be submitted to the FDEP.

Hangar X is not the only item on the SpaceX bucket list for the area just north of the Kennedy Space Center Visitor Complex.

The supporting documents for that project do not provide more details about how those buildings will be used.

As part of the permitting process for the wastewater treatment facility portion of the development, the FDEP is about a week into collecting public comments and any requests for a public meeting.

The public comment period opened Feb. 16 and will last until March 16. Following that, a Notice of Intent to Issue will be given on March 23, followed by a Notice of Permit Issuance on April 15.

The FDEP stated in its notice on the draft permit that it “intends to issue the permit unless as a result of public comment appropriate changes are made.”

The agency further stated that, “If a public meeting is held, any person may submit oral or written statements and data at the public meeting on the Department’s proposed action.”

Any public comments need to be sent to the FDEP’s Central District Office with the following information: