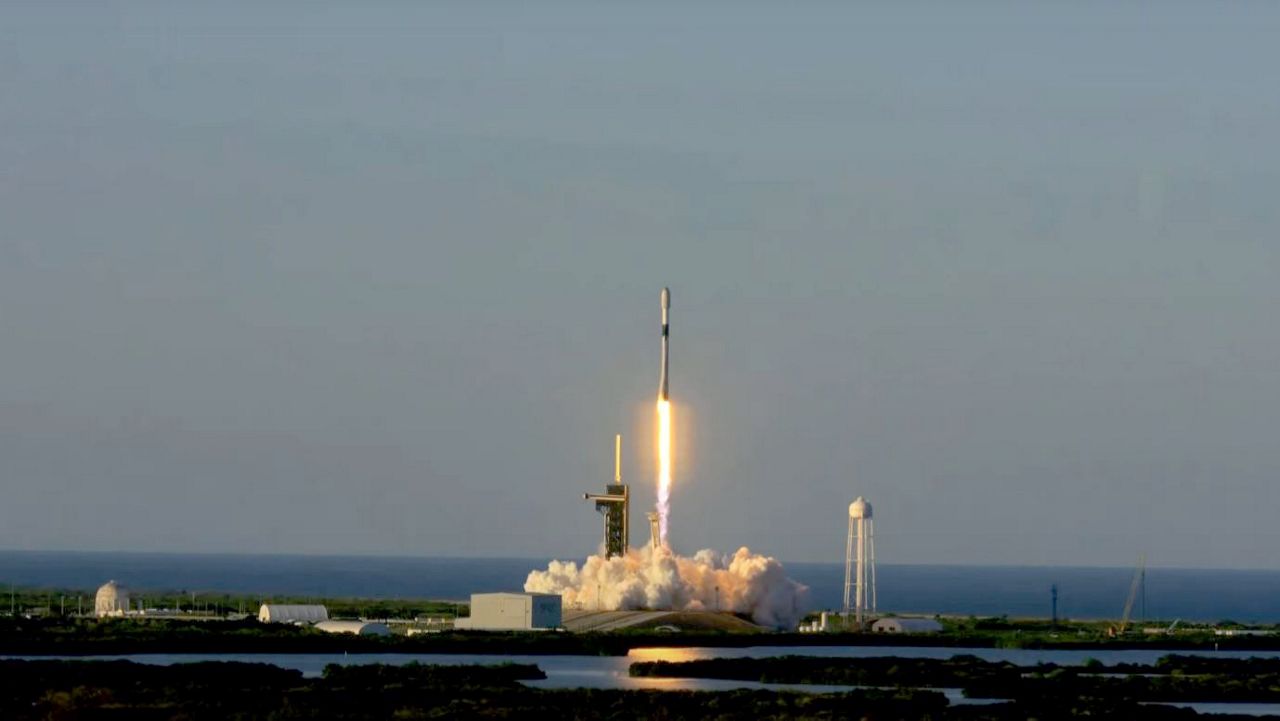 KENNEDY SPACE CENTER, Fla. — Not even a full week into calendar year 2022, the Space Coast saw the first liftoff of what’s expected to be a very busy launch year.

As with both 2020 and 2021, SpaceX has the distinction of hosting the first orbital launch of the year, which lifted off just before 5 p.m. Thursday.

Last year, the company based in Hawthorne, Calif., started by launching a Turkish communications satellite known as Turksat 5A. In 2020, SpaceX started with a batch of 60 Starlink satellites.

Thursday's launch will be similar to the start of 2020, in that SpaceX is using one of its Falcon 9 rockets for a dedicated Starlink mission to send a batch of 49 satellites into low-Earth orbit.

According to Dr. Jonathan McDowell, an astrophysicist and tracker of space activity, the last Starlink launch on December 18, 2021, brought the total number of satellites launched for the constellation up to 1,944.

This Group 4-5 mission will send the satellites to the fourth shell of the Starlink constellation. SpaceX is aiming for 4,400 satellites in the first five orbital shells, with further plans for expansion down the road.

Even though this mission is dubbed “Starlink 4-5,” the launch is only the fourth launch for this shell. For unexplained reasons, SpaceX skipped over Starlink 4-2.

SpaceX used the Falcon 9 first-stage booster B1062-4, which will make its fourth flight. It was previously used to support the launches of GPS III-4, GPS III-5 and Inspiration4, the first all-civilian orbital mission.

The booster was expected to land on the droneship A Shortfall of Gravitas, which left Port Canaveral earlier in the week to prepare for the launch. This would mark the 101st successful landing of a first-stage booster for SpaceX. No. 100 stuck the landing during the CRS-24 cargo mission to the International Space Station in December.

The Starlink 4-5 mission also gave those watching from the Space Coast an extra treat and something fairly unique to watch: The mission launched in a southern trajectory.

Prior to 2020, most southerly or polar-orbit launches took place from Vandenberg Space Force Base in California. But Space Launch Delta 45 leaders said that because of technological advances, that ability is able to be supported by the 1st Range Operations Squadron at Cape Canaveral Space Force Station.

“Due to the unique southerly trajectories, there will be a larger potential impact to air and sea traffic along the southeast coast of Florida,” said Maj. Jonathan Szul, Director of Operations for 1ROPS. “We ask that all pilots and mariners double-check their Notices to Airmen (NOTAM) and Notices to Mariners (NOTMAR) to ensure they are fully aware of all pending launch activities in this historic month on the Space Coast.”

Polar-orbit launches returned to Florida in August 2020 with the launch of the SAOCOM-1B satellite. It was followed up by the launches of Transporter-1 and Transporter-2 missions in January and June 2021, respectively.

Five of the seven anticipated launches in January will have a southerly trajectory, Szul said. That requires increasing communication with the public about where boaters and pilots need to avoid on launch days, he said.

“The biggest thing is public safety. We want to make sure the public is safe, the boaters and pilots are safe when flying through the air with these southern trajectories,” Szul said.

The addition of more of these unique launches means that the launch cadence will be increasing notably. It sets the stage for something never seen from Florida: two launches within 24 hours.

Szul said they’ve been ready for such a historic milestone since last year.

“We actually approved four two-in-24 launches in 2021 to be able to be ready for the numerous types of launches we have this year,” he said. “They actually never came to be due to weather, launch service providers changing their minds, et cetera. But we’re ready for those types of scenarios.”

What's next for SpaceX?

SpaceX’s next launch will be just across the river, at Space Launch Complex 40 at Cape Canaveral Space Force Station for the Transporter-3 mission. It’s part of SpaceX’s dedicated rideshare missions and will launch to a sun-synchronous orbit, hosting a number of smaller satellites.

That launch is anticipated no earlier than January 13, 2022.

Later this month, SpaceX will launch the COSMO-SkyMed SG 2, which is an Earth observation satellite from the Italian Space Agency (ASI).

It was previously planned to launch on a VEGA-C rocket, but issues with launch development and the COVID-19 pandemic forced ASI to switch to SpaceX as the launch provider.