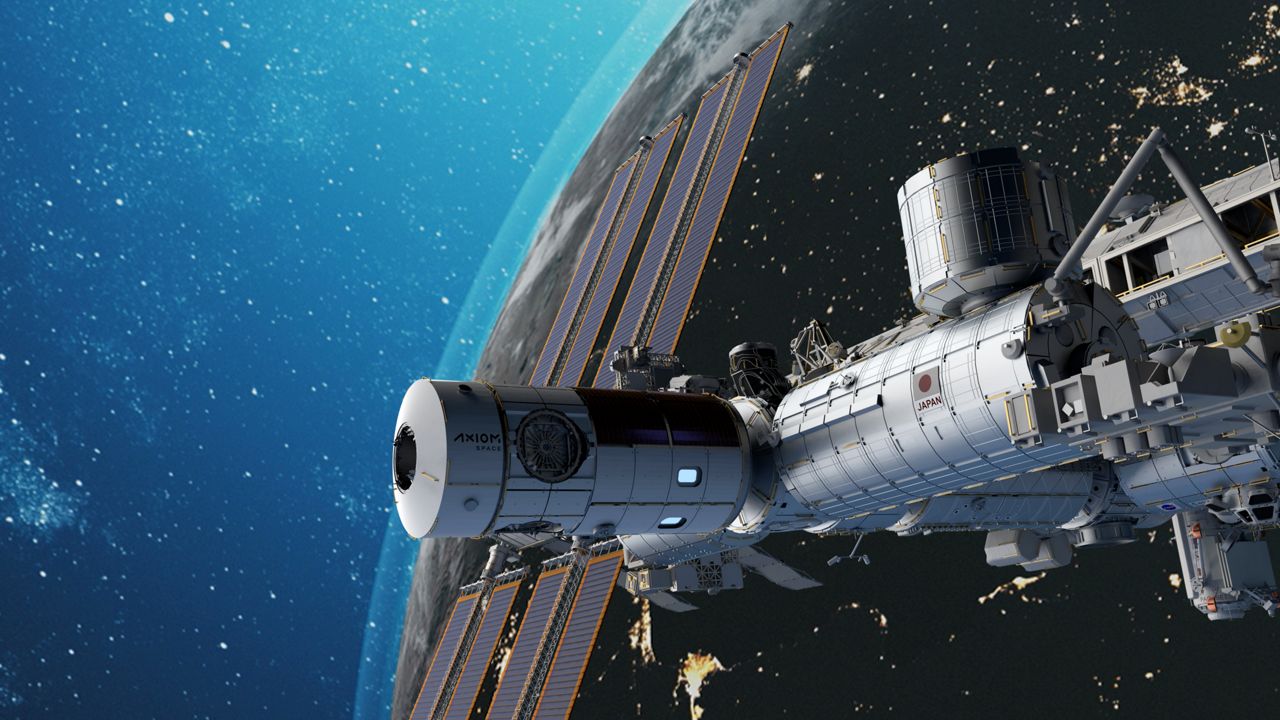 As the year 2021 ends, many can reflect on it as a crucial year for the space tourism industry. Virgin Galactic, Blue Origin and SpaceX all sent amateur voyagers to the edge of space or in orbit, in the case of the Inspiration4 mission.

The year 2022 will take that one step further with the launch of the first all-private astronaut mission to the International Space Station: Axiom 1 (Ax-1).

“It’s starting to feel very real because the training that we’re doing is becoming more and more flight-like and less theoretical and more practical,” said Michael López-Alegría, the commander of the Ax-1 mission. “And we’re pretty excited about it. It’s coming up fast.”

López-Alegría, known by his colleagues and others in the space industry as Michael LA, was recently inducted into the Astronaut Hall of Fame at Kennedy Space Center Visitor Complex along with fellow formers astronauts Pam Melroy and Scott Kelly.

He retired from working with NASA in 2012 after logging more than 257 days in space and performing 10 spacewalks spanning a total of 67 hours and 40 minutes.

The veteran of three Space Shuttle missions and a flight on Soyuz TMA-9 said he originally wasn’t planning to go back to space after he retired.

“Ever since leaving NASA in 2012, I’ve been advocating and pushing very hard for commercial spaceflight and specifically commercial human spaceflight,” López-Alegría said.

“I was pretty happy with my astronaut career at NASA. But this opportunity sort of presented itself and, I mean, it’s almost like a storybook conclusion to be able to lead the first private mission to the ISS after spending so many years promoting that kind of activity. So, I couldn’t be happier.”

Two months from now on February 28, 2022, the Ax-1 mission is set to take off from Launch Complex 39A at Kennedy Space Center on a SpaceX Falcon 9 rocket.

On board will be four private astronauts whose training and mission is being overseen primarily by Axiom Space:

The quartet’s training began with a Zero-G flight and centrifuge work back in May. When López-Alegría spoke with Spectrum News 13 in early December, the crew was heading to Germany to train at the European Astronaut Centre with a mockup of the Columbus module.

Excited to be at @EAC in Cologne for training on the #ISS Columbus module on Saint Nicholas Day! pic.twitter.com/IUNbYfCJUb

He said most of their theoretical training was done at that point.

“On the SpaceX side, we have quite a bit of work to do with simulations with both SpaceX launch and flight control teams as well as NASA’s flight control team when it comes to rendezvous and docking with the ISS and then later, separation from it,” López-Alegría said.

Conner, Pathy and Stibbe all have a slate of different science experiments that they will be conducting during their time on the ISS.

López-Alegría said that his role will not be as involved with the science itself, but rather coordinating for his crewmates.

“My responsibilities are different in that somebody’s not handing me a timeline of things to do. We’re actively working on how to best maximize the experience for the private astronauts,” López-Alegría said.

“I do have a small set of things I’ll be doing on my own and I hope to be helping do some NASA work as well because I’m getting trained to a level as if I were a normal ISS crew member. But I suspect that my timeline will look rather un-dense at the beginning and then will end up being pretty busy,” he added.

Next step in space tourism

The Ax-1 mission will be the latest development for SpaceX when it comes to sending humans to space. The upcoming launch comes on the heels of four successful launches to the Space Station, starting with Demo-2 in 2020, and continuing with its first tourism endeavor with Inspiration4.

The partnership with Axiom Space with a targeted launch date of February 28, 2022, will be the first of four announced missions to the ISS. On December 13, 2021, NASA announced that Ax-2 would be the second private astronaut mission to the Space Station.

We've selected @Axiom_Space for the second private astronaut mission to the @Space_Station, targeted to launch no earlier than late fall 2022: https://t.co/2GxRsHq92p pic.twitter.com/QbpOZuwe9G

“The agency did not make a selection for a third private astronaut mission from its June 2021 research announcement,” NASA said in a statement “NASA will gather lessons learned from the first private astronaut flight as well as other applicable station activities and announce a new flight opportunity in the future.”

Ax-2 will be commanded by veteran NASA astronaut Peggy Whitson, the first female commander of the ISS, and piloted by champion GT racer, John Shoffner. Whitson will also serve as a backup commander for the Ax-1 mission.

“Peggy’s got a wealth of experience with NASA as anybody familiar with human spaceflight would know,” López-Alegría said. “So yeah, we’ve got a very strong bench.”

Organizations that are working to grow and expand commercial and private enterprise, like Space Florida, said that missions like those with Axiom Space will be beneficial beyond their stated goals.

“Whatever the activity is in space, humans haven’t been there that long, that almost anything we do, we’re learning something that’s going to be absolutely critical to future missions, future activity, whether they’re noble works of exploration or further opportunities for commercialization,” said Dale Ketcham, the vice president of government and external relations for Space Florida. “We’re still so new in this enterprise, that everything we do, we’re learning from.”

López-Alegría said he sees private astronaut missions as just a piece of the commercialization of the low Earth orbit (LEO) space, which will accommodate a variety of uses.

“We do have to focus on commercial activities. Movie making could be one of them, tourism could be one of them, manufacturing we think will be a very important piece of that,” López-Alegría said. “I think the role of these private astronaut missions is to gradually expand the aperture with which NASA and the other agencies look at activities that are going on in low Earth orbit and adapt to what has to become a more complete marketplace in order for the economy in low-earth orbit to succeed.”

Beyond the Space Station

While the first slate of missions for Axiom Space are targeting the ISS as a destination, that won’t be the long-term goal for the company.

In 2024 and 2025, Axiom plans to launch the first two modules that will attach to the orbiting outpost to extend the capability of it.

“When the ISS goes away, the governments are going to want to have a platform to continue the same kind of thing they’re doing now. So, that’s kind of on the pure research side,” López-Alegría said.

Pressurized elements for the first two modules, which are like similar to the Node 2 part of the ISS, are being manufactured by Thales Alenia Space in Rome. Welding on the first module is well underway and assembly is expected to wrap up in 2022.

That first module will be delivered to the Axiom facilities in Houston in July 2023 for integration of the avionics.

“We’re completed with preliminary design review of those modules and headed toward critical design review. So, things are progressing very well,” López-Alegría said.

López-Alegría said the launch vehicle for these first two modules is “still TBD,” but confirmed that they will be launched through a U.S. launch provider.

By 2028, Axiom plans to have enough of its own infrastructure in place that it can detach from the current Space Station and operate independently. The goal is to bring their space station online before the ISS retires.

To that end, NASA also signed off on $415.6 million worth of Space Act Agreements for three commercial space stations backed primarily by Blue Origin, Nanoracks LLC and Northrop Grumman Systems Corp. This is on top of the agreement with Axiom.

“We welcome competitors because that’s going to keep us lean and hungry and innovative and the same for them,” López-Alegría said. “I think the teams themselves that were announced all represent really strong teams with a lot of experience in human spaceflight and so I think it is a positive step.”

López-Alegría was quick to point out that while NASA supports a certain amount of funding, that money needs to be appropriated by Congress. A NASA Office of Inspector General (OIG) report issued in late November outlines the sizable disconnect between what NASA asked for to help with commercialization of LEO and what lawmakers on Capitol Hill are willing to provide.

“NASA requested $150 million each year from Congress in FY 2019 through 2021 to fund commercial low Earth orbit development, but only received $40, $15 and $17 million in each of those three years, respectively,” the report stated. “This funding supports more than destination development – it covers all five pillars of the Agency’s commercial low Earth development and program management costs.”

NASA has yet to secure agreements that will officially extend the life of the ISS from 2024 to 2030. Currently, it costs $3 billion annually to operate the Space Station. López-Alegría worries about the ramifications that may come if Congress doesn’t appropriate money to allow the ISS to last long enough for commercial stations to get up and running.

“This is a consistent pattern and we saw it play out in spades when in the 2010s, they were falling way behind on the funding of the Commercial Crew Program and as a result, we had a gap from 2011 to 2020 for launching humans from our soil on U.S. vehicles,” López-Alegría said. “We can’t afford to have that happen on the ISS. We have to have a seamless transition, meaning the platform has to be in orbit and functional long before it’s decided to end the ISS program.”

“It’s hard to imagine operating any kind of long-term vehicle in orbit without EVA (extra-vehicular activity) capability. So, it fits right into our business model,” López-Alegría said. “We have a huge demand for private astronauts to do spacewalks.”

With just a couple months left before liftoff, López-Alegría said they are getting ready to rev up again after the holiday season.

The crew will be launching on Crew Dragon C206 otherwise known as “Endeavor.” It’s the same capsule that flew the Demo-2 and Crew-2 astronauts to the Space Station.

López-Alegría said he’s looking forward to spending more time with the Crew-3 astronauts and Mark Vande Hei once on board the ISS.

“I expect we’ll take our meals together. I think it will be quite an integrated crew, including the two Russians that are aboard,” López-Alegría said. “So, I’m hopeful that that will be the case.”