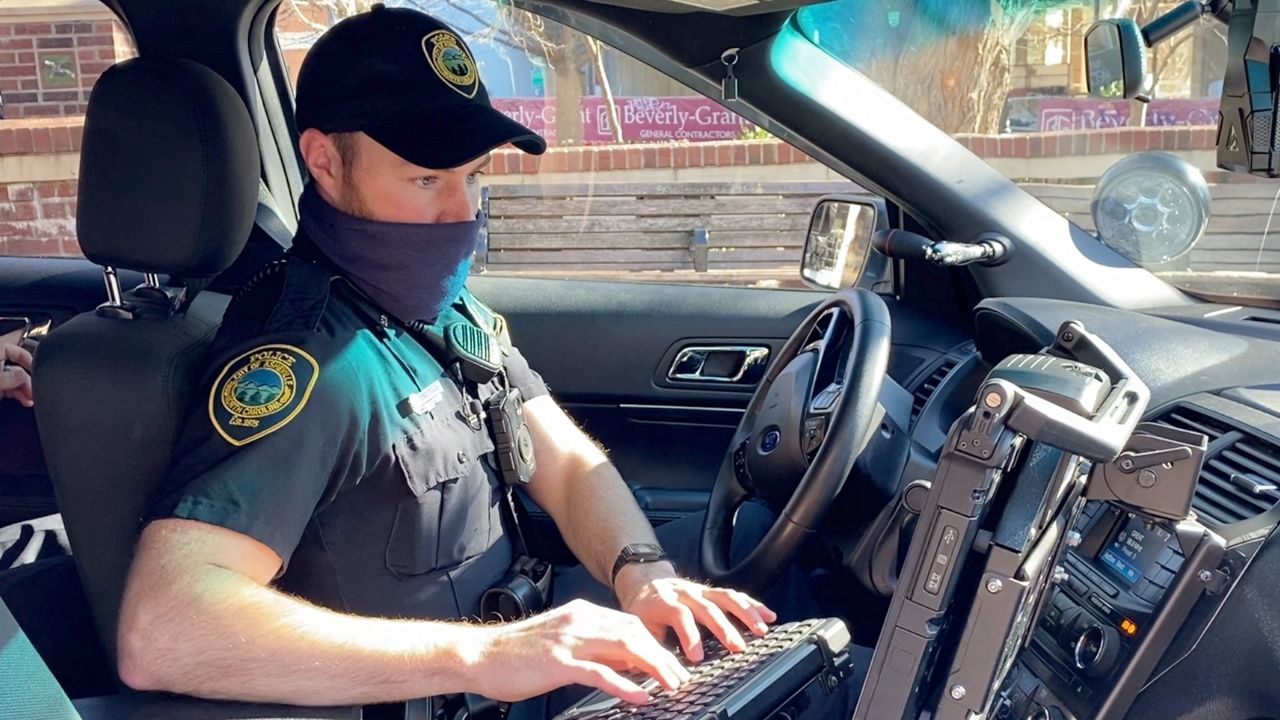 Asheville police Officer Samuel DeGrave, who joined the force two and half years ago, has seen over 80 officers retire or resign in the past year.

ASHEVILLE, N.C. — The Asheville Police Department is desperate for people to join the force.

The agency lost more officers over the past year than any other department in the country — shedding nearly 40% of their staff, who either retired or resigned.

Asheville police Capt. Brandon Moore says the staffing shortage is causing response times to go up and they’ve had to change which crimes officers will respond to

“When I was coming out of school, I was looking at law school or journalism,” DeGrave said.

DeGrave worked for an Asheville area newspaper as a reporter on the crime beat.

“One of the things that became frustrating for me when I was doing that job was, I didn’t really feel like I had much to offer,” DeGrave said.

About two and a half years ago, DeGrave jumped over the other side of the crime scene tape and joined the Asheville Police Department.

“Either myself or the people who I work with have made a significant impact on at least one person’s life,” DeGrave said. “There’s not a lot of jobs you can say that.”

But DeGrave has seen a lot of his teammates leave the force, as the department lost more than 80 officers over the past year.

“It’s hard because this job is like a family,” DeGrave said. “And you’ve lost a lot of your family members.”

DeGrave said he’s getting used to working extra shifts to cover for the lack of officers. He says looking out for his community keeps him going.

“There’s no job in which you have a greater opportunity to make a positive and lasting impact on the community that you live in,” DeGrave said.

Asheville police Capt. Brandon Moore says the strain on resources is causing response times to go up by minutes and it’s led them to cut the types of crimes they respond to.

“So, alarm calls that are consistent, we’re having supervisors cut those off,” Moore said. “To various nuisance crimes that are occurring that are obviously a public concern but we just don’t have the manpower to get them here.”

Moore says each officer is leaving for their own reasons.

“We've seen senior officers leave that have been through the ebb and flow of public opinion…still seeing that they don't want to go through or deal with that any longer,” Moore said. “And so, they have found that they can find another job…sometimes making more money in a much safer environment.”

DeGrave said he doesn’t dwell on the shortage because at the end of the day he has “a job to do.”

“It has to be done regardless of how many people [are on the force],” DeGrave said. “None of that can impact what we do.”

And after recently speaking with a new class of cadets, DeGrave said he’s hopeful for his department’s future.

“They want to change things for the better, they want to help their community and they haven’t even gotten a chance to do it yet,” DeGrave said. “And once they get that chance hopefully it’s going to take over like it has for me and everybody else who’s still here.”

The police department is looking at two proposals from outside companies to help with recruitment. Moore said they’re also calling on the city council and community members to have a role in rebuilding the department.