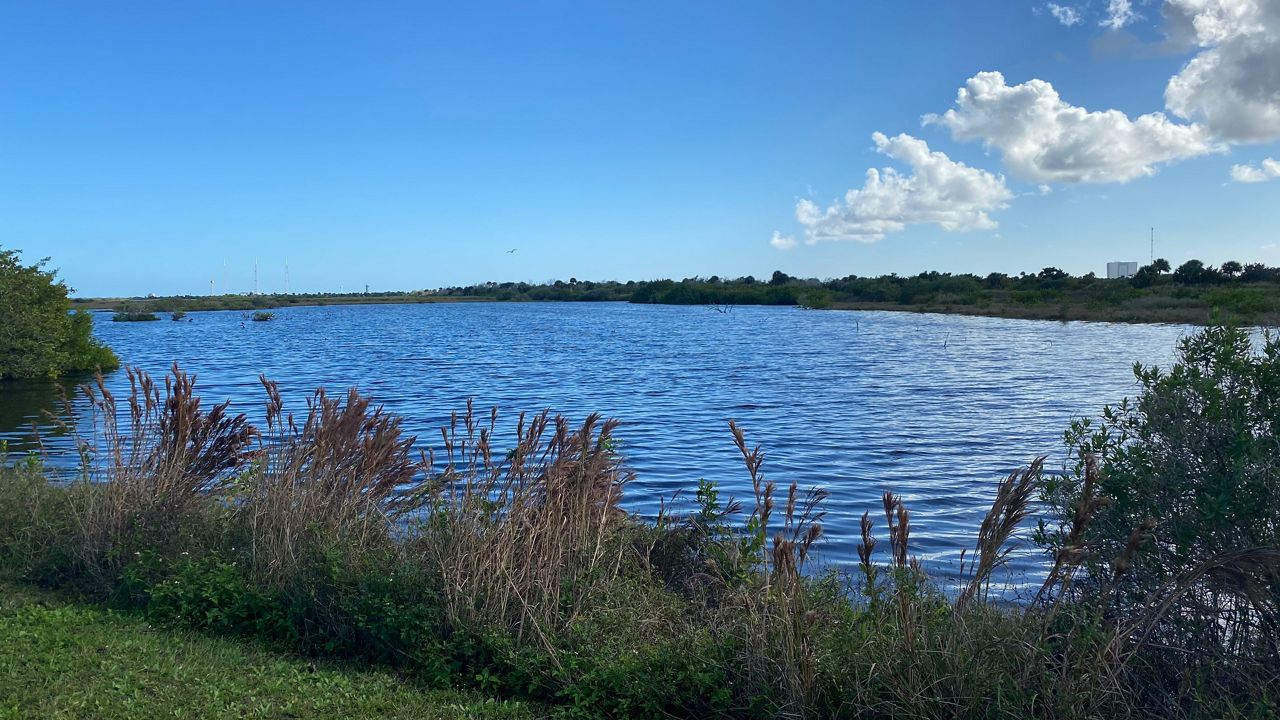 This photo provides a view of where Launch Complex 49 would be developed from the perspective of Canaveral National Seashore. (Spectrum News/Will Robinson-Smith)

CAPE CANAVERAL, Fla. — SpaceX founder Elon Musk has said a large number of launches for their new Starship spacecraft would be needed to make the human species multiplanetary. An important step toward that may be coming to the Cape.

SpaceX submitted a proposal to NASA to construct and operate a new launch pad, Launch Complex 49 at Kennedy Space Center (KSC). The area has been planned for development, according to Tom Engler, Kennedy’s director of Center Planning and Development.

“LC-49 has been a part of Kennedy’s master plan for several years,” Engler said in a statement. “The Notice of Availability was updated in 2014.”

The proposal was submitted through the Land Use Notice of Availability (NOA) process. If approved, it would also allow SpaceX to expand its “existing operations near Roberts Road.”

The 175-acre site is north of Launch Complex 39B, the location where NASA will launch its Space Launch System (SLS) rockets for the Artemis program to send humans back to the Moon.

“We’re pleased that there’s finally somebody that’s ready to have the kind of presence there, and it’s going to be a great addition to space center,” Engler said. “Probably the most significant change to the space center since it was built in the mid-'60s.”

The Starship spacecraft and Super Heavy rocket are often collectively referred to as “Starship.” SpaceX describes it as a “fully reusable transportation system designed to carry both crew and cargo to Earth orbit, the moon, Mars and beyond… with the ability to carry in excess of 100 metric tonnes to Earth orbit.”

Starship is currently undergoing construction and testing at the SpaceX facility in Boca Chica, Texas, known as Starbase.

The Starship spacecraft dubbed SN15 successfully completed a high-altitude flight test in May, and Elon Musk has pointed to early 2022 for the first orbital flight test of the full rocket.

“We’re close to our initial launch, our initial orbital launch,” Musk said during a virtual meeting with members of the National Academy of Sciences, Engineering, and Medicine in mid-November. “We’ve done several suborbital flights and have been able to land vehicles successfully. The first orbital flight, we’re hoping to do in January.”

Musk also noted in those comments that they’ve completed the first orbital booster and expected to complete construction on the launch tower by the end of the month. He said that December would include a number of tests, with the aim of launching in January.

Starship is also highly important to NASA because it was selected for development as the first lunar lander for the Artemis program. NASA first made the announcement back in April 2021 regarding the $2.89 million contract, but furthering the relationship was halted until November because of a lawsuit brought by Blue Origin, which also sought to win that initial contract.

Building up Starship/Super Heavy in Florida

The project for LC-49 comes in addition to the previously announced work that SpaceX began within the perimeter of Launch Complex 39A, the K Environmental Program Office said. In September 2019, an environmental assessment was completed and a finding of "no significant impact" was issued.

Musk confirmed via Twitter on Dec. 3 that construction of SpaceX’s Starship orbital launch pad at LC-39A was underway.

Construction of Starship orbital launch pad at the Cape has begun

The KEP office noted that this new proposed expansion would allow for not only redundancy with launches of Starship, but also “allow SpaceX to increase the flight rate of Starship and minimize potential disruptions to Falcon, Falcon Heavy and Dragon missions at LC-39A."

But when factoring in the Starship and Super Heavy, the document notes that SpaceX plans to “gradually increase to 24 launches per year” and would then reduce the number of launches for the Falcon 9 and Falcon Heavy rockets because of the higher lift capacity of Starship/Super Heavy.

In order for launch and landing infrastructure to come to fruition for SpaceX, the company will need to go through an environmental assessment, under the guidelines outlined in the National Environmental Policy Act.

Don Dankert, the technical lead for the Kennedy Environmental Planning Office said that work will be wide-ranging.

“We look at a really broad range of issues of issues. Obviously, everything from potential impacts to wildlife, socioeconomic impacts, cultural/historical resources. The range of issues is quite broad,” Dankert said. “And obviously, being on the refuge, directly adjacent to the Canaveral National Seashore, they’re partners in this process and will be invited as such to participate as we go through and develop the overall environmental assessment.”

A typical environmental assessment will take on average eight to 12 months to complete. The process begins with getting a full picture of what SpaceX hopes to accomplish with the request to build out LC-49 and then will begin seeking additional input, both from other governmental agencies as well as from the public.

“What that really does is it allows us, as we move into the analysis phase, to identify those big, key issues and to add those things into consideration so we address them early, and when we go back out with the draft document, we’ll have a lot of those issues identified and addressed and we’ll know the appropriate level of analysis we need to put into them,” Dankert said.

The public scoping will look different for this environmental assessment compared to what’s known as an environmental impact statement (what Starbase in Texas recently went through ahead of its first orbital flight test).

The EA process likely won’t involve live discussions with the public, according to Dankert, but the public will get comparable information, like with an EIS.

“We will put out the same information," Dankert said. "We’ll put out an informational packet with a .PDF chart, a description of the project and instructions on how to provide comments back to us and SpaceX.”

Engler said there may also be some lessons learned from the process of getting the launch facilities at Starbase approved for an orbital launch, but how that crossover would work has yet to be determined.

“We’ll take whatever lessons that they choose to bring to us from that and incorporate them as appropriate here as part of the environmental process,” Engler said.

Spectrum News 13 Reached out to SpaceX for comment but has not yet received a response.