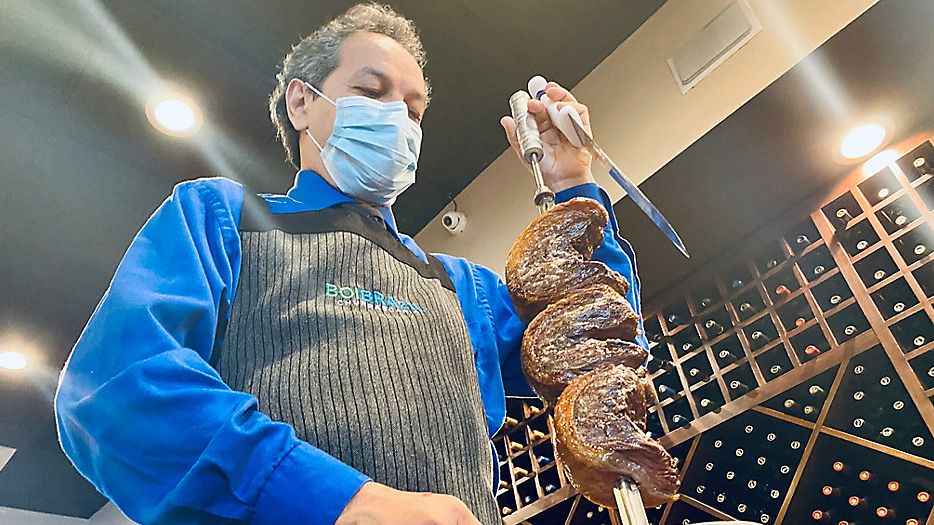 A server at BoiBrazil Churrascaria holds up a skewer of Picanha, a traditional Brazilian cut of meat. Flights from Brazil to Orlando resumed Wednesday as pandemic restrictions have lifted. (Spectrum News 13/Julie Gargotta)

Brazil is back: Commercial flights to Orlando resume after 19 months

ORLANDO, Fla. — It’s been a lull of more than a year and a half, but travel between Brazil and Central Florida — regular commercial flights, that is — resumed Wednesday for the first time in 19 months.

According to Visit Orlando, prior to the pandemic the region welcomed around 830,000 Brazilian travelers anually — making it the third largest international market, behind Canada and the U.K.

For those who cater to Brazilian tourists, there’s much to celebrate.

“A lot of businesses closed," said Nelson Ramos, who owns BoiBrazil Churrascaria. "For us, it’s a blessed day to be open.”

In his steakhouse, which seats 245 people, Ramos takes pride in serving authentic Brazilian food and cuts, like Picanha.

But, it wasn’t long ago that Ramos grew worried. At the height of the pandemic, he shut down his restaurant for two months and let most of his staff go.

Diners from Brazil represent about 40% of his business, but they — like many local diners as well — were not coming.

Once the restaurant reopened, he said that he leaned on his own family, his wife and kids, to pitch in.

“We cleaned the floor, we washed the dishes, we make the food and help to serve,” he said. “One month, two employees, then three months, more. Now, (we’re) fully staffed.”

The restaurant’s manager and chef, Arlem Schneider, stuck by his side through the pandemic, after coming to work at the steakhouse seven years ago.

He, too, is now celebrating Brazilian tourists’ return, and is anxious for what it means for the restaurant he’s come to love.

“Now we have a lot of tourists coming with borders open," Schneider said. "We expect more and more with the holidays — New Year, for Christmas. And in January, too, because schools are on vacation.

“It’s special because it’s our country, right? Our people.”

According to Visit Orlando, economic recovery from previously shut down travel markets will be gradual, with U.K. “showing the most immediate impact” while “Canadian and Brazil markets may be a little slower to recover.”

“Today really marks the beginning of the return of the Brazilian traveler," said Visit Orlando Chief Marketing Officer Danielle Hollander. "We’re so excited that Azul and LATAM decided to start flying this year, and that we can continue into next year.”

Agency officials also said they expect international travel to gain momentum in the coming spring and summer months, but do not expect full recovery until at least 2023.