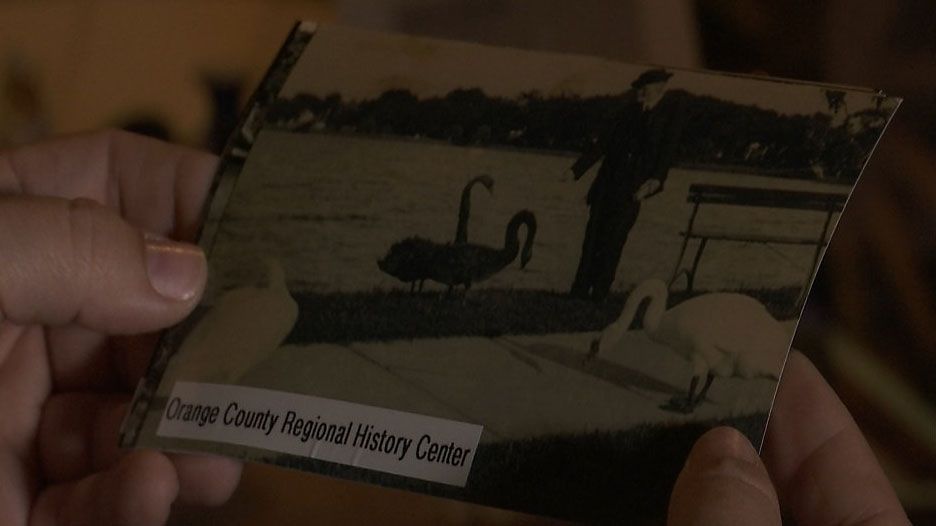 For more than a century now, the city of Orlando has been home to swans — some sassy, some sweet, some with a salacious past but over the years, they've come to be an iconic piece of the city beautiful's identity. (Orange County Regional History Center)

ORANGE COUNTY, Fla. — If you’ve walked around Lake Eola, you may have marveled at their beauty or shrank away from their bite.

For more than a century now, the city of Orlando has been home to swans — some sassy, some sweet, some with a salacious past but over the years, they've come to be an iconic piece of the city beautiful's identity.

The Orlando District 4 Commissioner greets the swans who swarm to the shore at the sight of her. Over the years, Sheehan has gotten to know this feathered family.

“I’ll bring you more food next time,” Sheehan said, joking to the swans who have gathered in anticipation of treats.

For 20 years now, she’s found comfort in caring for these big birds, getting to know their individual personalities well.

“Queenie will always be my favorite," Sheehan said. "She’s the best."

And she’s not alone in caring for these sassy swans.

“And the people of Orlando feel very passionate about these babies, about their swans,” Sheehan said.

But that wasn’t always the case. More than a decade earlier, the swans were being killed, attacked and even stolen regularly from Lake Eola Park due to poor care and diet.

“You know, they’re just really, really weak," Sheehan said. "And I’m like, well why are they weak? Well, they’re not getting a proper diet. So then we started instituting a program. If you see the feeders in the lake, that’s actually the proper diet for the swans. People were coming to the park and feeding them bread and donuts."

Switching their diet and instituting annual doctor visits, now these former sickly swans are doing swimmingly. And getting the city to stick out their necks for their feathered friends wasn’t tough. After all, they’ve lived here longer than most residents.

They're both loved and feared.

“I guess it’s all relative, some people love them," Schwartz said. "It depends on whether you’ve been chased by them."

chwartz said their records show the first swans were purchased with the help of the city back in 1910 - a pair of white swans and a pair of black swans for Lake Lucerne.

One of those swans is still infamous a century later.

“There’s all these really great stories about Billy and by great, I mean kind of horrible,” Schwartz said.

Billy the brute gained notoriety among four- and two-legged Orlando residents when he killed his mate.

“One day, Sally got sick of waiting for Billy so she could go out and take a swim and he actually ended up killing Sally. More swans were brought in, it’s just a whole lot of drama around the swans throughout the years, several murders,” Schwartz said.

Eventually Billy was banished to Lake Eola, then on the outskirts of town, but still wreaking havoc.

“Billy was so mean, he was biting everyone," Sheehan said. "And he actually was well known as being the mean swan. And after Billy died of natural causes, he was stuffed and put in the history center because everybody knew Billy!”

In the decades since, the birds have become known more for their beauty than their beastly tendencies.

“Billy was not a good boy but all these other swans out here at Lake Eola Park are amazing,” Sheehan said.

While these later generations of swans have mellowed out on the water, it let the city focus on less fowl interactions and happier endings for the birds on the lake, including finding a new mate, for Queenie the swan, to swim with.

“We had one shot with this love story that Queenie and Big Boy would hit it off but they really did and now they have the three babies,” Sheehan said.

It’s these same babies that chat back and forth with Sheehan on her regular visits to the lake.  The swans here are always happy to see an extra snack and some attention.

Sheehan says she can’t imagine the lake without these love birds, grateful everyone else in town seems to feel the same.

“So I think everyone who lives here has kind of adopted the Lake Eola swans as their pet,” Sheehan said.

There are around 60 swans estimated to be living at Lake Eola currently.  A more accurate count will be done during their annual wellness check of the birds next month.

For visitors who want to feed the swans, don't feed them bread or other treats. Instead, the city of Orlando said lettuce is recommended for a healthy diet for the swans.