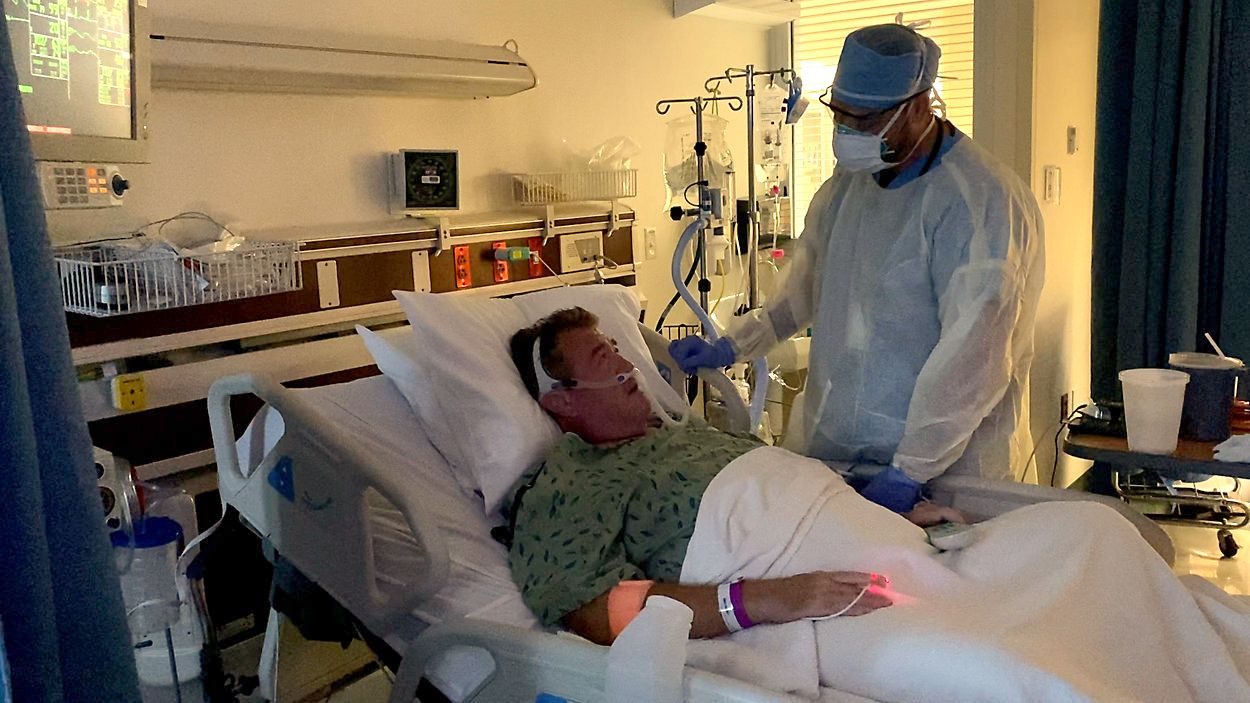 BREVARD COUNTY, Fla. — From the outside looking in, the numbers regarding those hospitalized with COVID-19 are trending in the right direction.

Since late August, the number of patients with the virus has been dropping, with the Florida Hospital Association reporting a 7-day change that is down 20.5% as of Sept. 20.

But where the state is now is just below the height of hospitalizations in July 2020. That is an exhausting place to be for those like Westley Colson, a respiratory therapist at Rockledge Regional Medical Center (RRMC) in Brevard County.

“It’s devastating. The things that we’re seeing are honestly incomprehensible, probably to some. Unexpected and devastating,” Colson said. “The health care system is completely under attack right now by this invisible war that’s going on with COVID, and at the moment, it feels like we’re losing.”

Colson joined RRMC nine years ago, with most of that time being spent in the operating room as an anesthesia tech. When deciding which path he wanted his career to go, between respiratory work and nursing, Colson went with the former.

He graduated from Eastern Florida State College’s respiratory therapy program and started in that role in January 2021.

“I did feel a calling to get out of the operating room and get some hands-on patient care going,” Colson said. “And that’s just what I got when I graduated — I was met with COVID.”

At that point though, the vaccines were in their infancy of the rollout and the number of patients hospitalized with COVID was peaking. About nine months later, even though the overall numbers are going down, the 8,488 reported now by the FHA is still substantially higher than the 7,762 hospitalizations Florida saw when Colson began as an RT.

The good and the bad

Colson said a small silver lining is seeing how this shared experience has brought the health care system together.

“It’s pulling us together, honestly, as a team, as a health care system,” he said. “I feel much more in tune with hospital operations from the top down.”

But he said that’s about where the good points end.

“On the other side of it, we’re losing our confidence," Colson said. "I would say because it seems like nine out of 10 patients don’t walk out of here, out of our ICU. The numbers are really hard, they’re really getting to us.”

Spectrum News 13 spent several hours with Colson in the ICU on Friday. The floor was about 60% filled with COVID-19 patients, some of whom were unconscious and hooked up to ventilators.

Others, like Dwayne Sparks were receiving oxygen, but were still able to breathe without a respirator. A purple wristband was on his right wrist with the letters DNI emblazed upon it, standing for “Do Not Intubate.”

“I don’t want to put any undue stress on my wife and boys with me laying here and they can’t come visit me here anyway,” Sparks said.

“I’ll be watching you like a hawk today. You are probably my healthiest patient on this unit,” Colson told Sparks before leaving the room.

He had noted moments earlier that he would be monitoring the fact that Sparks was on a very high oxygen demand.

Like the other 202 patients across Brevard County as of Sept. 20, Sparks was also unvaccinated when he was brought to the hospital. He said he wanted people to keep a close eye on their health and to not wait long on making a medical decision since “this is nothing to play with.”

Colson said the word exhausting is as accurate a word as any when he thinks about how he and his colleagues are doing.

He said they have to put on a brave face going into work and to a large extent, it stays on after they leave.

“Every one of these patients is — the odds of them leaving the ICU are already so small, and they get so sick so fast that they all — it’s tough.”

Colson said not only is keeping up with so many COVID patients a strain on the workforce, but also taxing on their resources, with many ventilators and oxygen remaining in constant use.

RRMC Director of Marketing Cathy Pague said that the hospital system still has a healthy supply of oxygen for its patients and that Brevard County isn’t seeing the same constraints that places like Orange County are experiencing.

Colson said while he still appreciates being able to help those in the community who get hospitalized and need their help, he hopes that those still outside of the ICU can return the favor and help bring this war to an end.

“We're doing everything that we can here. I mean, every nurse, every doctor, every therapist that you see is doing everything that they can here for every patient," he said. "And what we're asking is for the community to do the same: Get vaccinated, wear your mask and just do what's right for you, for your own health.”