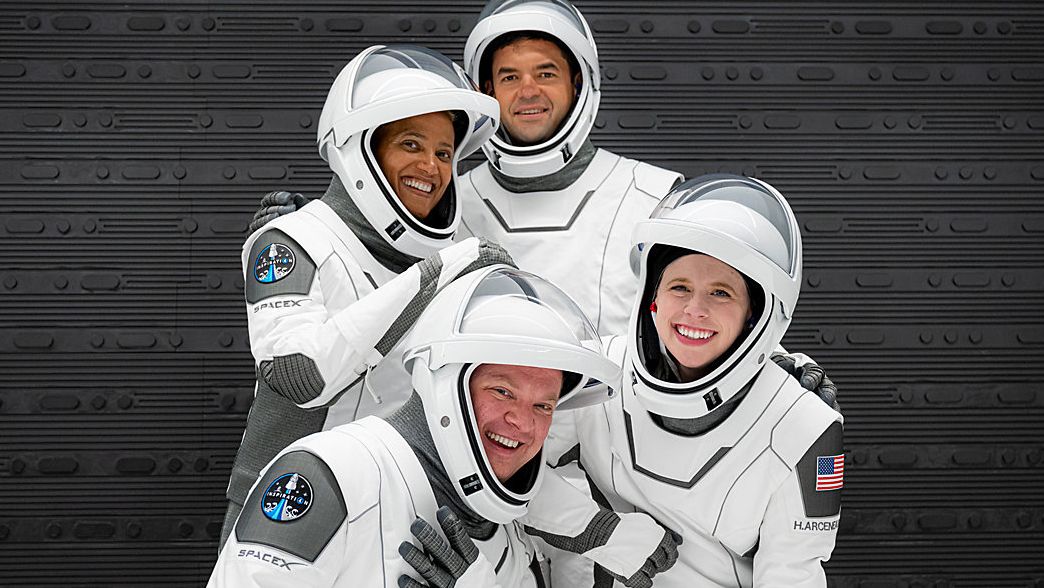 The Inspiration4 crew suits up ahead of Wednesday's scheduled launch aboard a SpaceX Dragon capsule. (Photo courtesy of SpaceX)

CAPE CANAVERAL, Fla. — On Wednesday, history will be made as the first all-civilian group of astronauts will be launched into low Earth orbit as part of the Inspiration4 mission.

The SpaceX-facilitated mission is scheduled to launch as soon as Wednesday night, with the launch window for crew members Jared Isaacman, Dr. Sian Proctor, Chris Sembroski and Hayley Arceneaux opening at 8:02 p.m.

The crew, which was announced in March, has been training for the mission since the spring.

The all-civilian trip to space also allows for unique opportunities for science to be conducted. SpaceX is working with the Translational Research Institute for Space Health (TRISH) at Baylor College of Medicine to gather biomedical data during the excursion.

“Up until today, there were only a very few platforms that allowed us to take bailouts into space flight,” said Dr. Emmanuel Urquieta, the chief medical officer for TRISH. “So with all of these new commercial providers and with civilians flying to space, I think we're going to have more capabilities to test these technologies.”

Urquieta traveled to Kennedy Space Center along with Jimmy Wu, the senior biomedical engineer for TRISH, and other members of their team to watch the launch in person.

The goal of their research is to help further the understanding of the effects of space flight on the human body.

Debut of the EXPAND program

The Inspiration4 mission will be the introduction of TRISH’s EXPAND — Enhancing eXploration Platforms and Analog Definition — Program. It’s designed to collect data from crewed missions and create a centralized database.

“As you know, there’s been only roughly 550 people who’ve flown into space since 1961, and it is not very demographically diverse," Urquieta said. "So, this new population is going to bring that diversity and is going to increase that number of participants that we fly into space.”

He noted that they may have 12 to 16 people going into space who participate in the EXPAND program each year, so the four astronauts-to-be who are flying aboard the Dragon Resilience (previously used for the NASA, SpaceX Crew-1 mission) will represent a good part of that population.

TRISH is creating a database where all the data collected from the Inspiration4 mission from its projects will be gathered and made available for future researchers' use.

“They will be diverse, they will have a different training, some of them will have different medical conditions," Urquieta said. "It’s very different from what you would normally see in the astronaut population."

Part of the mission for the team at TRISH will be to study the usability of the technologies by these amateur astronauts, since they don’t have the years of training a full-fledged astronaut would.

“So, testing these capabilities and new technologies with this very unique population that don’t have that very extensive training, it’s really a very unique opportunity to make sure this technology is working in that environment and that population,” he added.

Some of the technologies that will be used include the Cognition app — an iPad app that will “assess changes in behavioral and cognitive performance.” The technology has been used by professional astronauts aboard the International Space Station.

They will also be using a portable ultrasound device from Butterfly IQ+, which will allow them to monitor fluid shifts in their organs. Wu said the medical technology is progressing in a way that allows it to become more user-friendly for non-experts and having this opportunity to test it usability across a series of Apple products will be a good test case.

“I think medicine is at that early stage of realizing we’ve always had our doctors, our nurses, our clinical staff have to go through many years of school and training to get to that point,” Wu said. “But to now cross that valley where the average user can start taking care of their health, you need products that are easy to use and that the data is not so hard to understand and digest. And you’re starting to see that with a lot of our wearables.”

Wu started his career in this field at NASA’s Johnson Space Center and spent 14 years there before transitioning to TRISH. His work there now also includes leading a team on various medical technology projects and biomedical research for private commercial space flight missions.

Along with TRISH, SpaceX is also partnering with investigators at Weill Cornell Medicine to collect a series of samples from the crew before and after the mission to establish an enduring set of samples that will be preserved in a Biobank.

“This Biobank is being set up between Cornell and SpaceX as a long-term resource for anyone who has questions about space and what happens to the body in space and new methods of medicine,” said Dr. Christopher Mason, a professor of genomics, physiology and biophysics at Weill Cornell Medicine. “So, this is going to be a long-term biobank, not just for this mission, but for any future civilian mission that comes.”

Mason said that the Inspiration4 crew has been wonderful to work with over the months leading up to Wednesday’s launch.

“It’s very important to get regular people up into space and learn how their body adapts to being in zero gravity and up in space radiation because we know what happens when really healthy, well-trained astronauts go to space, but what if you take someone who’s never been there and just recently trained?” Mason said. “This will really open up space, hopefully, for a lot of other civilian missions.”

He said of the data that will come back from this mission, among the most significant for them will be creating “a complete profile of the blood and the immune system, and then banking all the blood samples for long-term use.”

“So, this is going to be everything that happens inside their body, but we’re also excited about what’s going to happen to the microbiome, what happens to the skin and the mouth,” Mason said. “So, it’s really all their cells, plus the microbial cells and we’ll get a full picture of all that.”

The Inspiration4 mission is set to launch Wednesday evening with a five-hour launch window that opens at 8:02 p.m. The SpaceX Falcon 9 rocket with its Crew Dragon capsule will launch from Launch Complex 39A at Kennedy Space Center.

About 12 minutes after liftoff, the Dragon will separate from the second stage and begin the three- to four-day orbit around the Earth. It will be orbiting about 575 km above the planet, farther than both the ISS (420 km) and the Hubble Space Telescope (540 km).