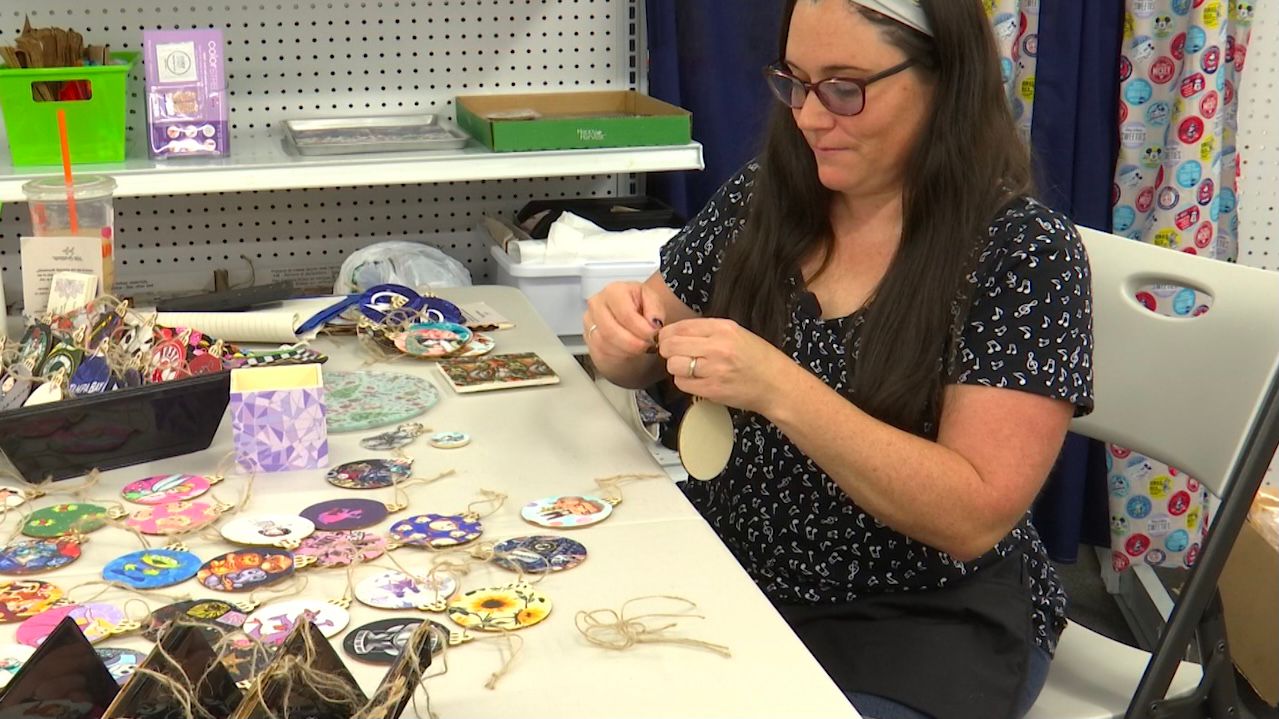 Joellen Knapp creates fabric ornaments to sell as a vendor at the Cast Co-Op in Clermont. (Spectrum News/Marisa Silvas)

Cast Co-Op shows hospitality workers it's 'Ear For You'

CLERMONT, Fla. — Former Disney cast members have joined forces to create a co-op in Clermont to help hospitality workers who have been impacted by the COVID-19 pandemic.


Joellen Knapp wants the items she sells to bring happy memories to her customers.

“I want someone to be able to see a Figment ornament and think, ‘Oh, my gosh, that time when I rode that ride,’ and then they have to have this for their tree,” said Joellen Knapp, owner of JoJo’s Market at the Cast Co-Op.

Knapp’s own love of Disney runs deep as a former cast member. But everything was put on hold for the guest talent coordinator in March 2020 when the theme parks and other businesses closed temporarily because of the COVID pandemic.

“My husband got furloughed, I got furloughed and there was nothing coming in for a while,” Knapp said. “It was difficult. We had to sign up for food assistance and get school lunches. It was tough.”

That’s when JoJo’s Market was born.

“It started because I had no idea what to do for Christmas and birthday presents for my friends and family because I didn’t want to use the little bit of money we did have leftover to buy things, but I also didn’t want to not do anything for people either,” Knapp said.

She is now able to sell her hand-crafted fabric designs at the Cast Co-op at Cagan Crossings.

“I love being here because it gives us a physical opportunity to be face to face with other people, and a lot of the vendors are in the same position, so we sympathize with each other, we support each other, we buy from each other,” Knapp said.

One side of the co-op creates a space for the vendors to sell and showcase their creations. The other side provides a market with groceries, household items and pet food.

“It doesn’t matter if your boss is Harry Potter, or Shamu or the Mouse, if you’re in the hospitality industry, we want to be ‘Ear For You,’ “ said Kim Schnepf, the Chief Operating Officer of Ear For You. “So that includes restaurants, bars, golf courses, anything that would’ve been greatly impacted by tourism or lack thereof.”

Three groups combined to open the Cast Co-Op 12 weeks ago. Since then, the market has served more than 300 families. Even though jobs are opening up again, there’s still a great need, Schnepf said.

“They still possibly had 10 months of unpaid bills, so if they can come pick up $100 worth of groceries and put that toward something that they’re still in arrears, that’s wonderful,” Schnepf said.

Whether you need help with the basics or want to support former hospitality workers with their side hustle, the Cast Co-Op partners said you’ll be treated like family.

“The community outreach that they’re doing to help these families like myself that lost all their finances at the same time. It’s amazing that people can come in and get what they need without feeling guilty about it,” Knapp said.

The Cast Co-Op has no anticipated closing date, and it’s always looking for donations. To find out more you can visit the co-op website.