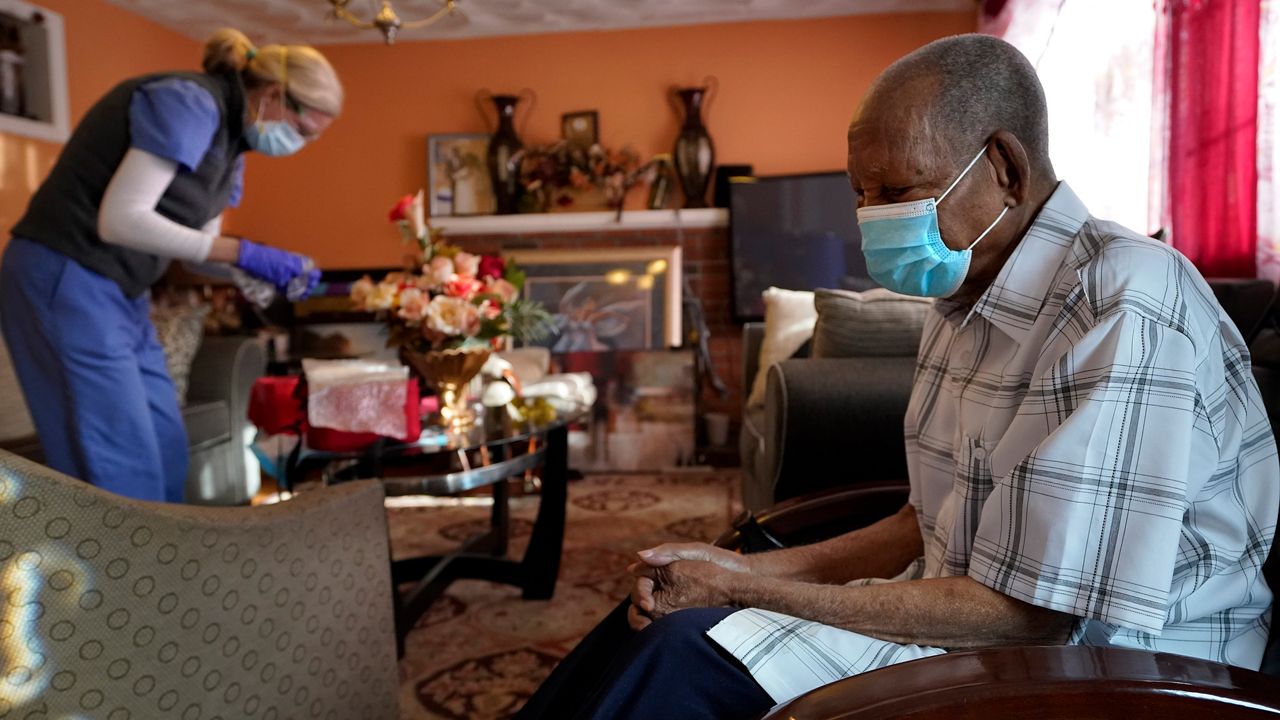 Edouard Joseph, 91, right, clasps his hands as geriatrician Megan Young, left, prepares to give him a COVID-19 vaccination at his home in the Mattapan neighborhood of Boston. (AP Photo/Steven Senne, File)

WASHINGTON — As the U.S. continues to deal with a labor shortage, it’s a problem that has grown even more severe for the home care industry since the pandemic.

“For almost 20 years as a care worker, I’ve taken on care in a very personal way,” said June Barrett, a home care worker based in Miami, Fla.

When Barrett began working as a caregiver, she describes feeling an instant connection with her client.

“In this woman, there was a reflection of my own grandmother who did not get the care she deserved,” Barrett, an immigrant from Jamaica, said.

Caregivers like Barrett have been difficult to find, as the industry is facing a major shortage. Barrett said there’s a reason for that.

“It has not been easy, I have experienced wage theft, sexual harassment, all the disrespect,” she said.

Barrett joined hundreds of other home care workers on Wednesday in the nation’s capital to call on lawmakers to invest in their industry. The “Care Can’t Wait” day of action was organized by the Service Employees International Union, National Domestic Workers Alliance.

"For too long, caregivers — who are disproportionately women, and women of color, and immigrants — have been unseen, underpaid, and undervalued,” President Joe Biden said while announcing his infrastructure proposal in Pittsburgh on March 31.

Some Republicans were opposed to the plan, saying home care doesn’t qualify as traditional infrastructure like roads and bridges. Ultimately, Democratic leaders excluded the funding from the deal the White House struck at the end of June with a bipartisan group of senators.

On Tuesday evening, Senate Democrats announced an agreement on a $3.5 trillion budget plan. Few details have been provided but it is expected to include investments in home care.

Recently, Sen. Tim Kaine, D-Virginia, re-introduced legislation to authorize over $1 billion in supporting the home care workforce and family care givers. It is unclear if that bill has enough support to move forward.

Sen. Rick Scott, R-Florida, has not taken a stance on this bill or any of the home care-related proposals.

"As governor of Florida, Senator Scott made a series of reforms to the Medicaid program to help provide more Home and Community Based Services (HCBS) services and benefits for Medicaid enrollees,” said Sarah Schwirian, a spokeswoman for Scott.

"As Congress continues to look at ways to support our nation’s caregiving network, Senator Scott will keep working with his colleagues to ensure care is available to those who need it,” she said.

“The biggest issue is there are not enough people in the pipeline to meet the needs today, much less when that baby boomer population keeps going up and up and up,” said Bobby Lolley, the executive director of Home Care Association of Florida.

“We are going to have to get more people at all skill levels, we have to have something that is going to bring these people in,” Lolley explained.

Part of the problem advocates say are Medicaid reimbursement rates are inadequate to cover the cost of care.

“We do need to increase Medicaid funding that will include enough to pay a livable wage, and we also need to provide career paths, train people well and give them opportunities for growth,” said Katie Smith Sloan, CEO of Leading Age, which represents nonprofit aging services providers.

“We are saying, if we value our professional care workers we need to pay them a living wage. This will reduce turnover, and by reducing turnover you’re also increasing quality. You don’t have to be constantly training people, but you’re also able to consistently assign staff to clients, so that they are able to develop those kinds of very meaningful relationships,” she added.

Although it is still unclear what exactly Congress will do to support home care workers and recipients, momentum for change is growing.

“We are creating a movement of change for the folks coming behind us, because I tell you something, Care is essential,” Barrett said.