More than a hundred people supporting the anti-government protests in Cuba blocked Dale Mabry Highway in Tampa for more than two hours on Tuesday. An attorney said under Florida's anti-riot law all of those demonstrators could've received a $15 citation. (Josh Rojas/Spectrum Bay News 9)


"The question is what happened yesterday, did law enforcement have the ability, did they have probable cause to arrest these folks under the anti-rioting bill?" asked Hayslett. "The answer is yes they did." ​

More than a hundred people supporting the anti-government protests in Cuba blocked Dale Mabry Highway in Tampa for more than two hours. Hayslett said under Florida's anti-riot law all of those demonstrators could've received a $15 citation.

"Right now part of the anti-riot bill also there's a civil citation that was written in," he said. "It's a $15 fine if you willfully block a roadway."​

Hayslett point out the law also gives officers discretion on when to use it. TPD did not cite or make any arrests under the anti-riot law but the defense attorney said they could have after giving an order to disperse which enhances the civil citation.

"Tampa police gave them three orders to disperse," said Hayslett. "They were told to disperse and that moved it from, bumped the level. So, now they're willfully, right, and they're not peacefully protesting and they are disorderly.​"

Hayslett said ignoring the dispersal order enhances the penalty from a civil infraction to a third degree felony. Protests that turn violent or result in property damage also enhance the penalty to a felony. 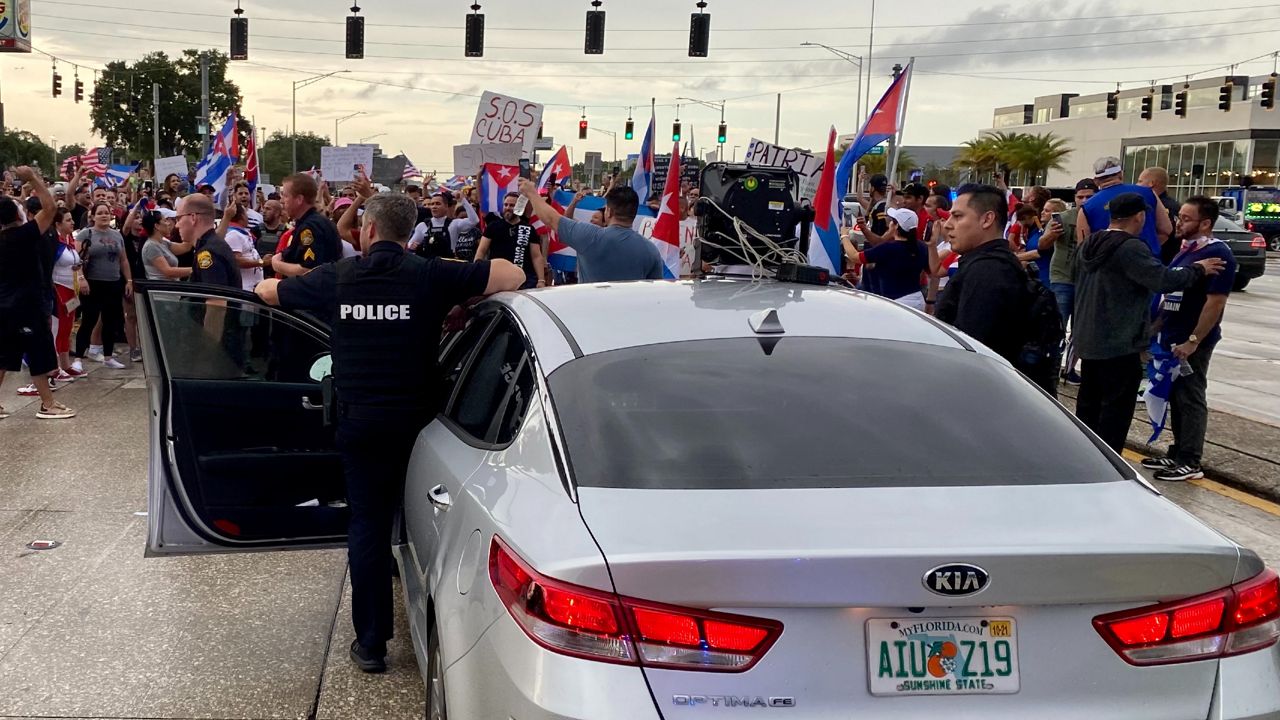 The Tuesday evening protests followed a similar evening of protesting Monday in a different part of the city. (Josh Rojas/Spectrum Bay News 9)

TPD arrested three protesters who police said tried to get onto the interstate and scuffled with officers. The new law was used by the Hillsborough Jail to hold two of those men - Julian Rodriguez-Roddrgiez and Maikel Vasquez-Pico - in jail until their first appearance before a judge. Before Governor Ron DeSantis signed the new law in April in response to last year's BLM protests, those men would've been released on bond.

Hayslett said the anti-riot law comes with a lot of unintended consequences and he expects it will be challenged in the Florida Supreme Court.

"I think there's a lot of commas," he said. "There's a lot of grey area and that's always a problem as you want to clearly identify what is criminal activity because we the citizens want to be put on notice wether we're violating the law or not."​

For example, Hayslett said sports fans could technically be cited for blocking the road after their favorite team wins the game and they're leaving the stadium.

Spectrum News has repeatedly asked Governor DeSantis' office for a response about the new law not being enforced but nobody has gotten back to us. DeSantis dodged a question about it during a press conference in Miami on Tuesday.