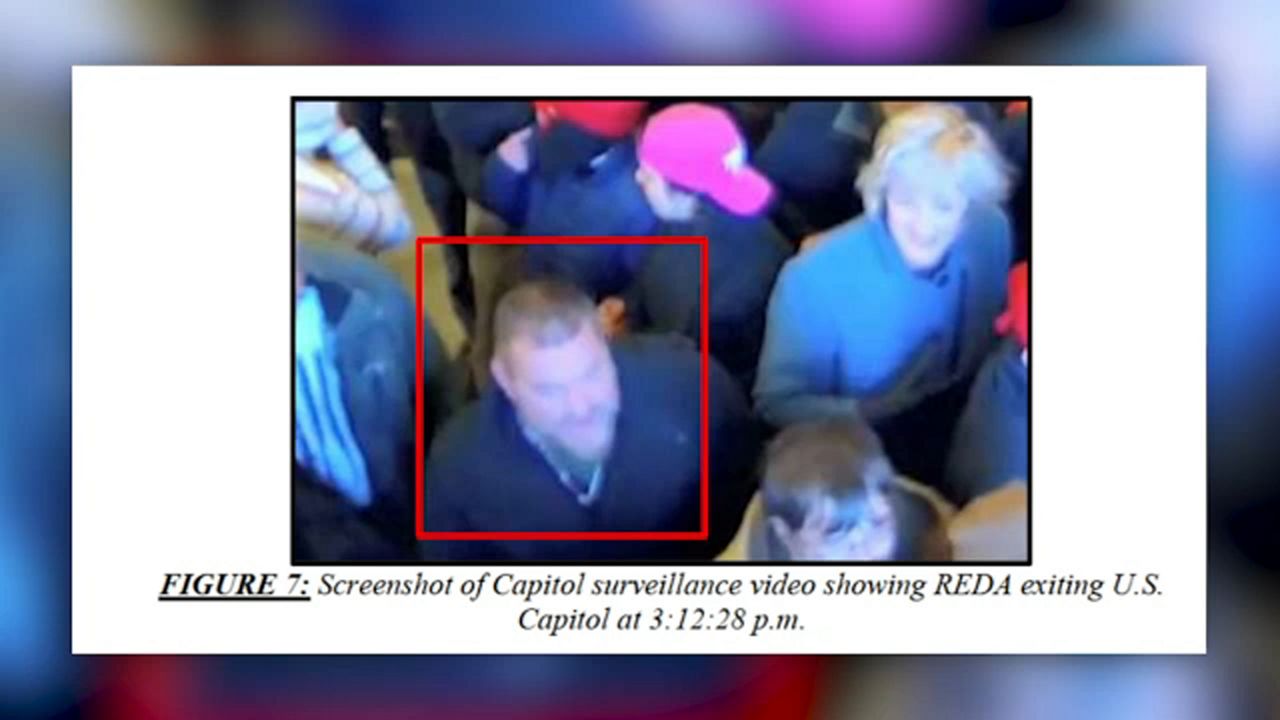 BREVARD COUNTY, Fla. — A physical education teacher at Viera High School faces an internal investigation by the Brevard County School District after he was charged Tuesday as one of the latest suspects in the deadly January attack on the U.S. Capitol.


Kenneth J. Reda, 54, of Melbourne was arrested Tuesday on a criminal complaint from the District of Columbia alleging four federal crimes related to his suspected involvement in the Jan. 6 riot.

Reda on Tuesday appeared before U.S. Magistrate Judge Embry J. Kidd in an Orlando courtroom and was released on several conditions, including posting a $25,000 bond. His case will be prosecuted in Washington D.C.

Reda’s neighbor B.F. Robertson describes him as a "great guy, great neighbor, somebody you'd like to have as a neighbor."

Robertson said Reda is someone he can always count on to keep a lookout over his home when Robertson is out of town.

"I travel lot,” Robertson said. “I do a lot of fishing. We have a lot of issues around this neighborhood, and he's always been a great person."

Robertson said Reda may have been there that day, but he doesn't believe he did anything wrong.

"I don't think anything Kenny did went overboard," Robertson said. "But I think some of it went overboard for sure. But again, Kenny perfect American, great guy."

Reda, who has been at Viera since 2014, is on administrative leave while an investigation is being conducted, district officials said.

"Human resources will have an internal investigation,” Russell Bruhn of Brevard Public Schools’ communications department. “They'll have a talk with all the parties involved, and review and look at discipline for the teacher in this case."

The arrest of Reda follows the June 26 arrest in Tampa of Mitchell Todd Gardner, whose charges include destruction of government property and obstructing, influencing or impeding any proceeding or attempt to do so.

They join more than 500 suspects nationwide charged in the ongoing federal investigation. Those include at least 31 in Central Florida and Tampa Bay and at least 50 in Florida.

Documents released by the U.S. Department of Justice say a tipster contacted the FBI about Reda and pointed investigators to his posts on Parler, a social media network used by conservatives as an alternative to Twitter.

"Kenneth Reda lives in Brevard County Florida. This is his Parler account. I have heard that he was sending videos of the insurrection to friends," the tipster said in a message to the FBI. "I am resubmitting because I heard he claimed to have ["]helped[''] 3 police officers who had fallen or were being trampled."

A second tipster gave the FBI an image of person described as a Capitol rioter from the ProPublica journalism website.

Details of what Reda is suspected of doing at the U.S. Capitol were not immediately available.

A 10-page statement of facts from an FBI officer detailed how investigators traced the Parler posts to Reda.

His Parler profile, created on June 17, 2019, describes himself as an "Imperfect Son of the Lord Jesus Christ, Husband, Father, Son, Pop, Educator, concerned American NRA & 2A supporter: WWG1WGA." That's stands for a slogan from the discredited QAnon conspiracy movement meaning, "Where we go one, we go all."

With a search warrant, investigators determined Reda's phone was in an area that includes the interior of the U.S. Capitol Building.

Agents found photos of person they identified as Reda inside the Capitol with other rioters.

An FBI agent found Reda's address and interviewed a neighbor. The neighbor recognized Reda but said he didn't know him. He said Reda worked at a school and drove a Jeep with large tires.

The agent found a December 18, 2019 video of Reda on Space Coast Daily, an online news site.

The FBI got Reda's plate number and found his Jeep in the parking lot of Viera High School.

The FBI agent found posts attributed to Reda admitting he was inside the Capitol and posts from December urging others who wrongly think Trump won to show up en masse on Jan. 6 for the presidential election certification in Congress.

"We have to get to DC on January 6th it is IMPERATIVE every single person that VOTED for Trump has to flood DC.," one post said.

Reda is charged with:

In the case of Gardner, images and video show him inside restricted areas and inside the U.S. Capitol, according to government documents. They show him "standing on a U.S. Capitol window ledge striking and damaging the window with what appears to be a red canister covered with a black case," according to a document filed in U.S. District Court.

Gardner is also charged with:

Gardner had his initial appearance in court on June 28.