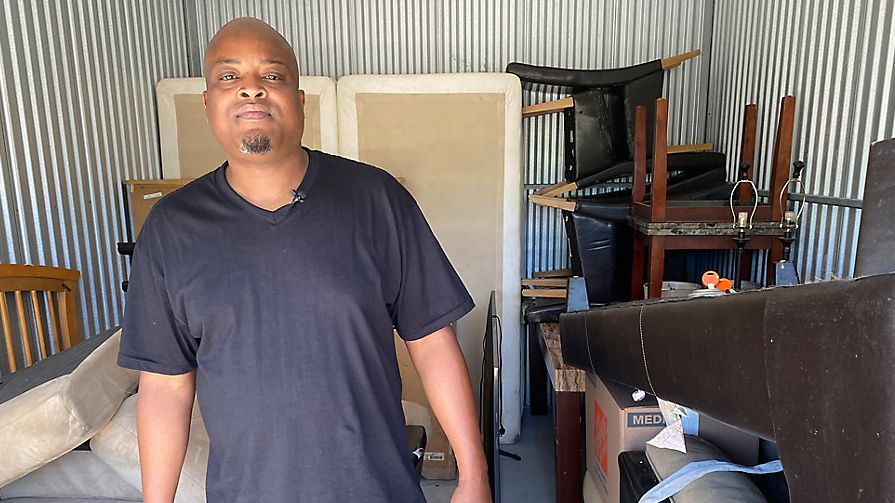 Lar'Shemore Morton rented out a storage unit for his personal items and furniture following his eviction from a Melbourne apartment. (Spectrum News/Molly Duerig)

As the end of the federal eviction moratorium draws near, the Consumer Financial Protection Bureau is warning landlords and consumer reporting agencies that they will be held accountable for providing any inaccurate, incomplete or misleading rental information about tenants — including eviction information.

The bulletin issued Thursday lays out some preexisting concerns about standard tenant screening methods, which the agency fears the pandemic may have only exacerbated.

Among those concerns is the fact that generally, when someone has an eviction filed against them, specific details about the case and its outcome don’t transfer over to that person’s consumer report. In other words, reporting agencies and landlords only see that someone was evicted — but they don’t see why or under what circumstances, including whether the eviction was related to COVID-19.

“The Bureau is concerned that information concerning evictions and rental payment arrearages related to the pandemic’s effects may not be a reliable predictor of a consumer’s future performance given the extent of the economic dislocation caused by the pandemic,” the CFPB’s bulletin reads.

An eviction on your record greatly inhibits your ability to find safe, stable housing in the future. Yet a 2019 analysis of millions of eviction records filed in 12 different states found that on average, 22% of eviction records either contained ambiguous information about how the case was resolved or falsely represented a tenant’s eviction history.

After recently being evicted from his Melbourne, Fla. apartment, Morton says he’s already been rejected from five rental units. For each application, he paid between $50 to $75 in nonrefundable fees.

“If (landlords) go to the court building and file an eviction, it hits your record immediately,” Morton said.

He says he’s fortunate to be able to stay at his sister’s temporarily, knowing many other people in his shoes don’t have that option.

“I’ve learned that if you don't have support, you’ll be homeless,” Morton said. “You’ll be in some woods or a tent, somebody's backyard.”

“All the people who didn’t have a place to go, my heart goes out to them,” he said.

Morton said his former job laid him off for 10 months during the pandemic, and he previously received emergency rental assistance from Brevard County. But his lease was up in early January – and unbeknownst to him, Morton’s landlord didn’t plan on renewing their agreement.

“I tried to give her the money, and she wouldn’t accept it. She said my lease ran out,” Morton said.

That documentation requirement “has the potential to exclude tenants in informal tenure situations, or whose leases have expired, and who may be at high risk for eviction,” according to the report.

The NLIHC encourages rental assistance programs to allow applicants to “self-attest” their tenancy, income and rental assistance history. Cutting down on documentation requirements in this way helps get assistance out more quickly and effectively to the most vulnerable people at risk of losing their homes, according to NLIHC, which provides on its site some examples of ways local programs can allow for self-attestation.

Emergency rental assistance has been slow to reach people in need during the pandemic. State and local programs have distributed only a very small portion of the billions of dollars the federal government has allocated to rental assistance.

Now newly reemployed with another company, Morton is focused on getting back on his feet — and sharing his story with other people who might be in his shoes, in hopes it may help someone else.