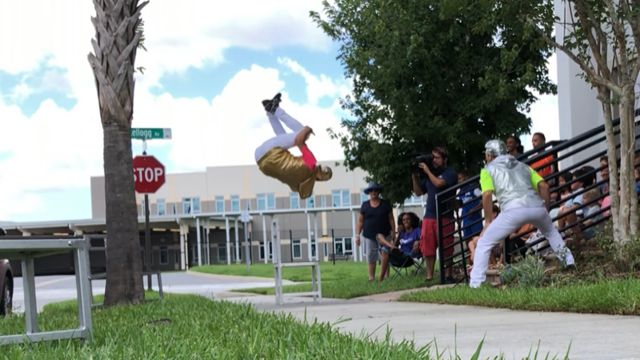 'Now we’re within 6 feet of them (audience members) and you can see the reaction right on their faces and that’s priceless, and I would go out on a limb to say that’s even better,' Zach Miller said. (Spectrum News/Jeff Allen)

ORANGE COUNTY, Fla. — Over this past year, many people have had to adapt and change to continue to make a living after they lost their jobs — especially in the tourism industry, where thousands of people were furloughed and laid off.

Zach Miller and Csaba Szilagyi found a way to keep performing, despite losing their jobs at Disney.


“We’ve always loved performing because we love to make people happy and we love to see their reaction,” Miller said.

Both performed in the Indiana Jones Stunt Spectacular and other shows at Disney, but both were furloughed and eventually laid off.

“Every day we got to perform for almost 10,000 people at Disney, so it meant a lot,” Miller said.

“But you know what? Every closed door opens a new one.”

The two decided to take their talents literally on the road. They now pull up in a trailer to neighborhoods across Central Florida. The sidewalk is their stage.

“And not once did we ever think this was a possibility, but it just took an outlier idea from somebody and we looked at each other and said what if we could do it,”  Miller said.

Since the duo formed “Curbside Circus” a few months ago, they’ve performed at least 50 shows. They’ve relied largely on their talent and ingenuity to make the transition from Disney employees to business owners.

But others who’ve lost work may need more help. Valencia College said participants in its Accelerated Skills Training Program have more than doubled in the past year. The program teaches new skills that lead directly to jobs with specific skillsets. Program administrators say they’re expecting several hundred more applicants for the program this coming year.

Miller and Szilagyi had to adapt to keep using their unique talents to make a living. They say this new way of performing may even be more rewarding than the work at Disney.

“Now we’re within 6 feet of them and you can see the reaction right on their faces and that’s priceless, and I would go out on a limb to say that’s even better,” Miller said.

They had to defy the odds in order to continue defying gravity.

“This is our only option," Miller said. "This is what we love to do.

“And I don’t think we would ever choose to do something we didn’t love.”