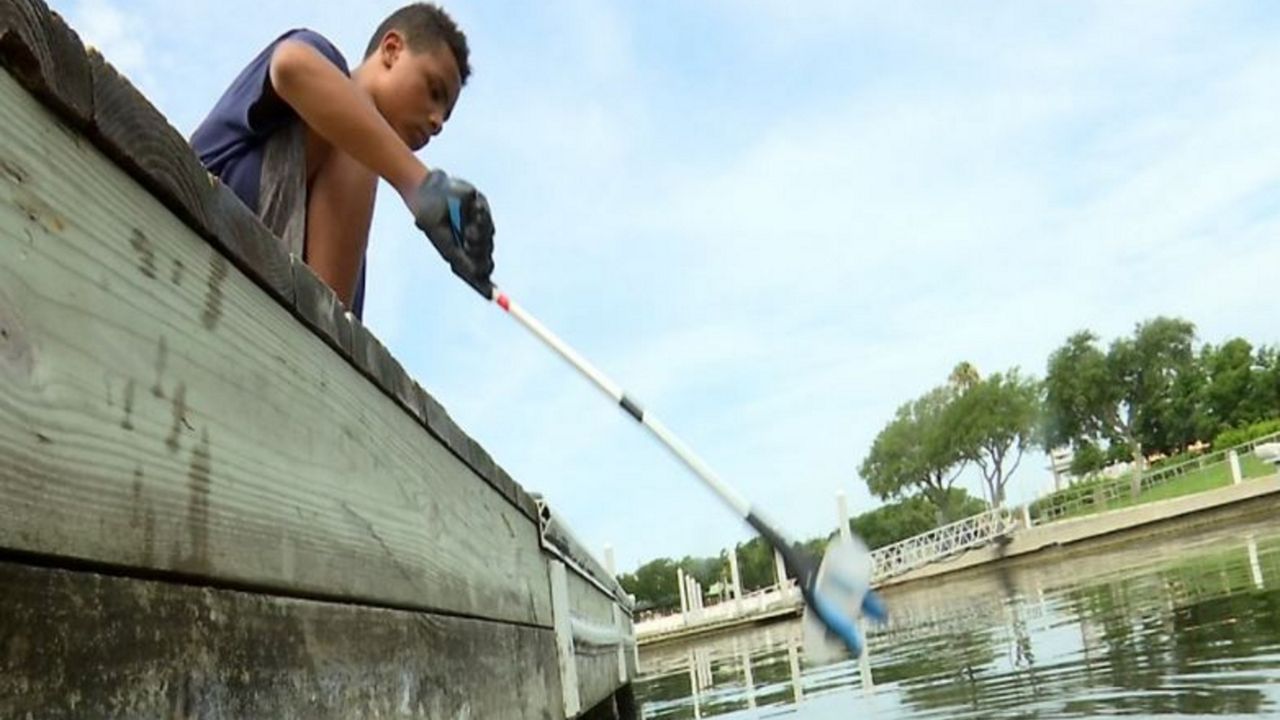 A Fight For Zero volunteer collects a water sample near Cocoa to help with a University of Florida study on PFAs. (Spectrum News/Will Robinson-Smith)

BREVARD COUNTY, Fla. — The University of Florida is nearly a year into a 3-year study on what happens with “forever chemicals,” or PFAs, which can be found at some military installations, during natural disasters such as hurricanes and other flooding events.


Researchers are concerned about PFAS (per- and polyfluoroalkyl substances) because they have a yearslong half-life, can accumulate in the body and take more than four years to be purged from the body. They can also be passed on to babies through breast milk. PFAs also have potential links to debilitating medical issues.

The university is nearly a year into a 3-year study dubbed “Building Resilience to PFAS Exposure on Vulnerable Coastal Communities Prone to Extreme Weather Floods: Brevard County FL as a Case Study.”

The study, which is focused on Brevard County, is trying to determine whether the existence of PFAS in the ground water, surface water and soil exceeds the level advised by the Environmental Protection Agency and whether there’s an overlap of high areas of concern regarding PFAS concentration/exposure and communities at high risk of health complications because of their age.

The two most discussed PFAS are PFOA and PFOS. The EPA’s latest drinking level health advisory on these PFAS was that their presence should not exceed 70 parts per trillion (ppt), or similar to about 70 drops of water in an Olympic-sized swimming pool.

While the study is primarily focused on Brevard County, some research also is being conducted in Jacksonville, according to Dr. Katherine Deliz Quiñones, who is leading the 3-year study.

“There’s a lot of similarities in terms of potential exposure. There’s a coastal community as well, there’s DoD (Department of Defense) military sites in the area as well,” she said. “We expect that those activities that we’re engaging with Brevard and Jacksonville could actually help each other.”

As researchers go through this data, families around Central Florida and elsewhere in the country are feeling the impacts of PFAS in their lives.

Retired Army pilot Jim Holmes spent more than 25 years in the service, which brought his family to then-Patrick Air Force Base and lived in South and Central Housing from 2004-2005 and in 2008-2013.

During that time and decades prior, the U.S. Air Force was using Aqueous Film-Forming Foam Concentrates (AFFF) during training exercises. Holmes and others were not aware that they could be exposed to PFOA and PFOS.

His daughter, Kaela, developed a rare brain tumor that she lived with for 15 months before dying from her condition.

“Her eyes were bloodshot red, she was shaking from the pain, body tensed up,” Holmes said. “It was torture on Earth.”

Holmes said the Defense Department has known about the presence of PFAS at their installations.

Kaela’s doctor linked her diagnosis and exposure to PFAS, potentially from Patrick Air Force Base.

According to a Department of Defense (DoD) report from March 2018, the year Kaela died, of 28 groundwater samples taken, all 28 tested above the Environmental Protection Agency’s lifetime health advisory (LHA) level of 70 ppt. The range discovered at Patrick AFB was 71-4.3 million ppt.

Holmes testified before Congress about what happened to his daughter on March 11, 2020, and said, in part:

“The time since Kaela passed away has been difficult … the only thing I own with a military connection is my retired ID card. I will have to live the rest of my life knowing that my decision to serve in the military and reside on a United States Air Force base resulted in the death of my beautiful daughter.”

Preliminary research data may be released this summer

The University of Florida research on PFAS began in 2020 and is funded through a grant from the Environmental Protection Agency.

“What we’ve done so far, establishing a baseline of the diversity of PFAS that we find there and how they change during these flooding events,” Deliz Quiñones said.

Groups like Fight For Zero in Brevard County have been collecting weekly samples from around the county to help UF researchers learn more about how these chemicals can spread from their original locations.

So far, they’ve analyzed some of their surface water samples as well as some soil samples and started to look into the data. Quiñones said they hope to start publishing data by the end of the summer. So far, they’ve been able to identify 15 species of PFAS in Brevard County that showed up about 75 percent of the times that they’ve done analysis, she said.

At this point, they’ve only been able to take samples around one hurricane event, Hurricane Dorian in 2019. They showed that after the storm, they found less concentration of PFAS, which may or may not be a good thing overall.

“Being low is a good thing, but we don’t know why it’s low,” Deliz Quiñones said. “If it’s just a direct effect of precipitation, dilution from excess water getting into the system that we’re analyzing, or are they just being mobilized more because of the weather event? So, we’ll have to look more in-depth to see what’s happening.”

In March 2020, the same month of Holmes’ testimony to Congress about his daughter’s illness, the Defense Department released an update on the progress from its PFAS Task Force. They argue that AFFF is “mission critical” because, as of then, “no fluorine-free foam, including foam that does not contain PFAS, meets the strict safety standards in the MILSPEC required to protect DoD Service members by rapidly extinguishing dangerous fuel fires.”

It is no longer being used for land-based testing and training but is still in use for emergency events.

Congress directed the Defense Department to provide $40 million to study the exposure in communities around eight current and former military installations for a multisite health study. The report did not state when that would be completed, but said results will be publicly available when that happens.

In a report published by the GAO on Tuesday, 687 Defense Department installations were identified as having known or suspected amounts of PFAS. Of those, 181 have received a preliminary assessment and78 have begun remedial investigations.

None of them have started long-term cleanup work.

Among the sites named on that list include Patrick Space Force Base, Naval Air Station Jacksonville and Tyndall Air Force Base in Florida. The bill also would require that, within five years after the act becomes law, “the Secretary shall complete all physical construction required” to clean up the PFOA and PFOS at those sites.

The Clean Water for Military Families Act would require the Defense Department to conduct an investigation and remediation of these sites and would direct $10 billion to get the work done.

As of now, the bills only are supported by Democrats.

Holmes said he’s tried to reach out to the offices of Florida Sens. Rick Scott and Marco Rubio but hasn’t heard back on whether they will be supporting this legislation.

“Particularly, Republicans don’t seem to want to deal with it,” Holmes said. “And as a lifelong Republican, I can tell you right now, nothing will make me vote Democrat faster than you not addressing this issue.”

Spectrum News 13 reached out to the offices of both Florida senators on Wednesday.

A statement from Rubio’s office said, “Senator Rubio hasn’t commented on these particular bills, but he has been active in this space. He was the Republican co-lead of (Michigan) Senator (Debbie) Stabenow’s PFAS Accountability Act last Congress, which was not reintroduced because similar provisions were secured in the NDAA (National Defense Authorization Act).  He was also a co-sponsor of (Delaware) Senator (Tom) Carper’s PFAS Action Act.”

“Throughout his time as Governor, Senator Scott worked to make Florida the most military and veteran friendly state in the nation,” the statement said. “As Senator and member of the Armed Services committee, Senator Scott continues to work to make sure our military members and their families have everything they need. He will review every bill that comes before the Senate.”