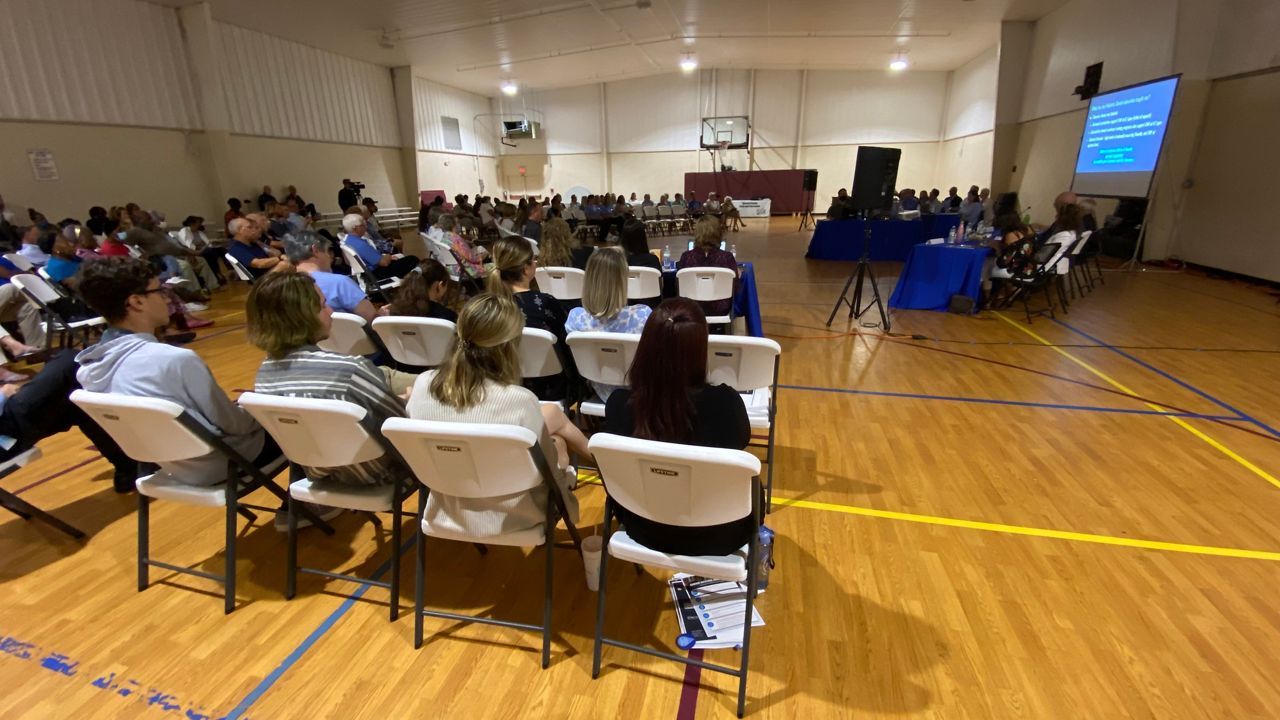 Mims residents hear arguments for, against fluoride in water

BREVARD COUNTY, Fla — More than a month after Brevard County stopped adding fluoride to the water going to customers in Mims, some residents were able to hear a collection of arguments both for and against the practice known as community water fluoridation (CWF).

Monday night’s meeting was one of the requests called for by many members of the medical and dental communities in Brevard County. They were also backed by national organizations, like the Centers for Disease Control and Prevention (CDC) and the American Dental Association (ADA), which wrote letters to the Brevard County Commission supporting the return of CWF.

The meeting also included time for customers who get their water from Mims to offer their thoughts on the matter. All of the roughly half dozen people who signed up to speak said they supported the return of CWF.

“The fact that every single person who was given time had a sticker on and was pro-fluoride speaks volumes for what the Mims community wants,” said Dr. Angela McNeight, the president of the Brevard County Dental Society.

She said that even though the people who attended are only a fraction of the more than 8,300 people who receive their water from Mims, that the sample night was indicative of how the majority of the community feels.

“All the Mims people I talked to after the meeting said that their neighbors, a lot of people hadn’t heard about it, but when they started talking about it, they wanted to know why was it removed, why weren’t they able to give their opinion before it was removed and what’s going to happen next,” McNeight said. “So, I think neighbor-to-neighbor talk is huge and we want to make sure that we are a resource for everyone in the Mims community to show them the science, but also show them that they have support if they have questions.”

During the two-hour community meeting, a pair of panels, one for and one against CWF spoke to the dozens of people in the gym at Cuyler Park Community Center.

The panelists speaking on behalf of restoring CWF for Mims customers included doctors, dentists and teachers among the group of 10.

Dr. Johnny Johnson, the president of the American Fluoridation Society and a retired pediatric dentist who worked in Palm Harbor, said he was encouraged by the turnout and the support that CWF had with those in the room.

“What they did was to get up and speak because this was their community and they were not consulted at all,”  Johnson said.

He and others pointed to a large body of scientific research that backs the use of CWF. One such example published in some of the literature they brought referenced a 2013 memorandum from the U.S. Department of Defense that states the Assistant Secretary of Defense for Health Affairs “has determined that providing optimally fluoridated water at DoD installations helps to improve and sustain the military readiness and health of military personnel.”

Another speaker supporting CWF noted that a 1998 amendment to the Safe Drinking Water Act of 1974 calls for the U.S. Environmental Protection Agency (EPA) to assess safe CWF levels every six years, with the next one coming up in 2023.

“It’s preventive for both adults and children,” said Dr. Maria Stahl, the Brevard County Health Officer. “It’s one of the best preventive public health measures that we can do.”

On the opposing side, lone dentist Dr. Lee Sheldon, a periodontist working in Melbourne, acknowledged that he was the only dentist on his side of the discussion on Monday night.

He pointed to an institution called the Cochrane Library, which noted in a 2015 analysis of CWF studies that “There is very little contemporary evidence, meeting the review's inclusion criteria, that has evaluated the effectiveness of water fluoridation for the prevention of caries.”

That same analysis also noted that “Around 73% of dental fluorosis studies were conducted in places with naturally occurring – not added – fluoride in their water.”

Other speakers argued that there were negative health effects brought on by CWF. Proponents of community water fluoridation who spoke first acknowledged some of these arguments upfront and said there was not good science to back that up.

Gainsville was the first part of Florida to gain community water fluoridation back in 1949 and as of 2018, 77.4% of the state had CWF in their communities, according to the Florida Department of Health.

That agency also “firmly supports and continues to recommend fluoridation as the most economical and effective means to control the major health problem of dental caries.”

During Monday’s meeting, Commissioner Rita Pritchett, who called for and received a vote to halt CWF back in May, said she was mistaken in not first reaching out to the people who receive their water from Mims before making a move that impacted more than 8,300 people.

She said the decision to allow customers to vote on whether or not CWF will return is the best course of action at this point and said the ballots would be a part of the July water bill.

“When they did this back in, I think it was 1999, this is the way they did it and everybody seemed happy with it and the outcome. So, I figured it was just the best way to follow it,” Pritchett said.

However, one ballot does not equal one person’s vote. The ballots will be sent to the person who pays the water bill. That means that if you have one household with six people living together and another with only two, their votes count equally.

“This is not a scientific method of finding out who wants fluoridation or not. This is flawed and basically is discriminatory,” said Johnson.

Brevard County Utilities said the total number of accounts as of May was 3,353. It said assuming that there are on average 2.5 people per account, those 3,353 accounts represent about 8,383 people.

When asked by Spectrum News 13 about how many returns Pritchett would find acceptable to move forward with the determination, she said she believes it will see a high turnout.

“I’ve been hearing from people all over Facebook and everything. This is a very passionate topic,” Pritchett said.

In order to bring CWF back, voters will need to support adding it again with a supermajority or 2/3 of the vote. In a Facebook post from June 15, Pritchett describes the question that will appear on the July water bill as follows:

“Do you want to have fluoride added to your drinking water? Yes or No.”

She stated that customers need to drop their ballot responses in the mail by Aug. 6 and all those voting have to be a Mims Water customer.