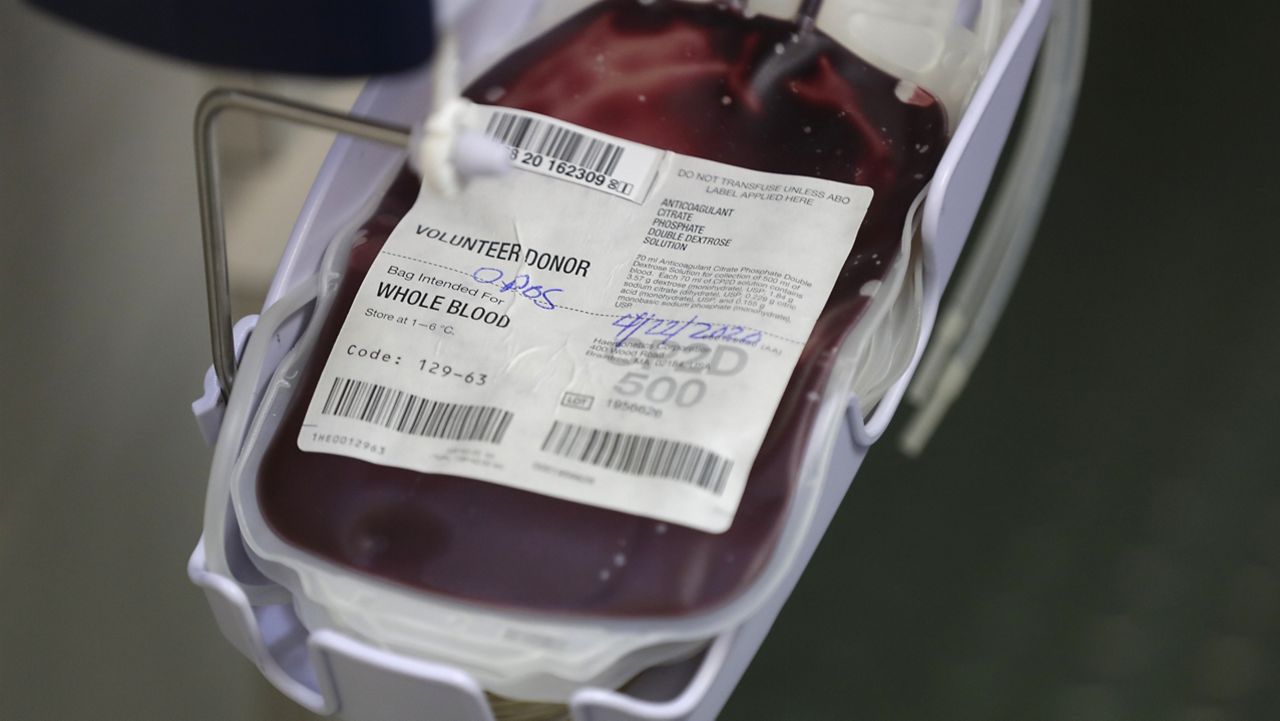 Jude Graham has always wanted to give blood.

“It’s personal,” Graham told Spectrum News’ Samantha-Jo Roth, noting that his desire to donate dates back to high school and his service in the military — and when his younger cousin needed a bone marrow transplant a few years ago.

“I was ineligible because of the FDA’s ban on men who have sex with men donating blood and/or blood products,” the 26-year-old Navy veteran said.

“Knowing that I wasn’t able to donate made me feel almost useless,” Graham said, adding: “It definitely made me feel like I wasn’t contributing in a meaningful way to something that’s super easy to do.”

In 1983, the Food and Drug Administration (FDA) barred blood donations from all men who have had sex with men (MSM) after 1977 “to reduce the transmission of HIV by blood and blood products.”

The policy was revised in 2015 to a 12-month deferral period — meaning that in order to donate blood, MSMs needed to abide by a year-long abstinence span — and revised again in April 2020 to three months, citing the “urgent need for blood” at the height of the COVID-19 pandemic.

What the FDA’s guidance doesn’t take into account is men who are practicing safe sexual practices, or those who are in monogamous relationships, advocates say.

“For example, a man who has had protected oral sex with another man once in the 3 months currently (is) barred from donating blood,” the Human Rights Campaign says. “Yet a woman who has had unprotected sex with multiple partners over the same time frame with no knowledge of their personal histories remains in the donor pool.”

Some lawmakers are calling for the FDA to do away with these restrictions completely.

“The sooner this happens, the better," Florida Rep. Val Demings told Spectrum News. "The ability to donate blood saves lives. It is one of the most precious life-saving gifts."

The Democratic lawmaker, who is challenging Republican incumbent Marco Rubio for a seat in the Senate next year, also has a personal connection to this fight. Five years ago, Demings’ community was rocked by the Pulse Nightclub shooting, which saw 49 people killed, many of whom were Latino and LGBTQ+.

“There's so many things I remember from that tragic day,” Demings said. “One of them were individuals who wanted to donate blood but, because of antiquated laws and procedures, they were not able to.”

After the Pulse shooting, more than 100 members of the House and nearly two dozen senators wrote separate letters to the commissioner of the FDA urging the agency to change its policy.

The same month, the American Medical Association (AMA) released a statement applauding the FDA for changing the deferral period from 12 months to three, but urged the FDA to “take future steps to remove the categorical restrictions for blood donations by MSM so they are instead based on a person’s individual risk, consistent with the latest scientific evidence, to ensure blood donation criteria is equitably applied across all people."

Last year, the FDA launched a first-of-its-kind study known as Assessing Donor Variability and New Concepts in Eligibility, or ADVANCE, which could be the first step toward revising restrictions on blood donations for men who have sex with men. The study is funded by the FDA and is being conducted by the nation's largest blood centers: Vitalant, OneBlood and the American Red Cross.

Graham is one such participant. He told Spectrum News that “it was like going to the doctor's office.”

“There was a questionnaire. They took a small sample of blood, a lot less than I thought they were going to,” he said.

The study aims to enroll 2,000 men at community health centers in Los Angeles; San Francisco; Memphis, Tennessee; Miami, Orlando, Florida; Atlanta; Baton Rouge, Louisiana; and Washington, D.C. who meet the criteria — namely, men from the ages of 18-39 who live in those communities and who have had sex with at least one other man in the three months before joining the study.

The study aims to provide data to the FDA by the end of the year.

Earlier this month, ahead of the Pulse anniversary, New York Rep. Carolyn Maloney, along with Demings and a number of other House Democrats, sent a letter to acting FDA Commissioner Dr. Janet Woodcock supporting the ADVANCE study.

“We applaud the FDA’s decision to launch a pilot study that will utilize an individual blood donation questionnaire to assess risk factors that could indicate possible infection with a transfusion transmissible infection, including HIV,” the lawmakers wrote.

“We appreciate that the FDA has been willing to engage in discussions specific to the MSM deferral policy and revise guidance following Pulse, which included modifying the blanket ban to 12-months and again to 3-months deferral periods,” they acknowledged. “These are steps in the right direction, but ultimately reductions in the ban should not be tied specifically to sexual orientation or disaster-based supply issues.

"An individual’s personal risk profile, regardless of sexual orientation and based on scientific and technological progress, should guide the policy,” they concluded.

According to the American Red Cross, the United States is currently confronting a severe blood shortage; the group is urging eligible Americans to donate blood.

“The Red Cross is currently experiencing a severe blood shortage,” Chris Hrouda, president of Red Cross Biomedical Services, said in a statement last week. “Our teams are working around the clock to meet the extraordinary blood needs of hospitals and patients – distributing about 75,000 more blood products than expected over the past three months to meet demand – but we can’t do it without donors.

“Every two seconds, someone in the U.S. needs blood,” Hrouda added.

A 2014 analysis from UCLA School of Law’s Williams Institute estimated that lifting restrictions on men who have sex with men could increase the total annual blood supply by 2-4%.

Last week, the United Kingdom lifted similar restrictions, allowing people of any gender or sexual orientation who have been in a monogamous relationship for at least three months to donate blood, the National Health Service announced.

Graham has similar hopes for the ADVANCE study in the United States.

“I hope the study proves to the FDA that they can repeal their discriminatory policy,” Graham said, urging more people to participate in the study.

“If you are a gay or bi man in one of the participating cities, please consider signing up because we have to be the change we want to see,” he added.