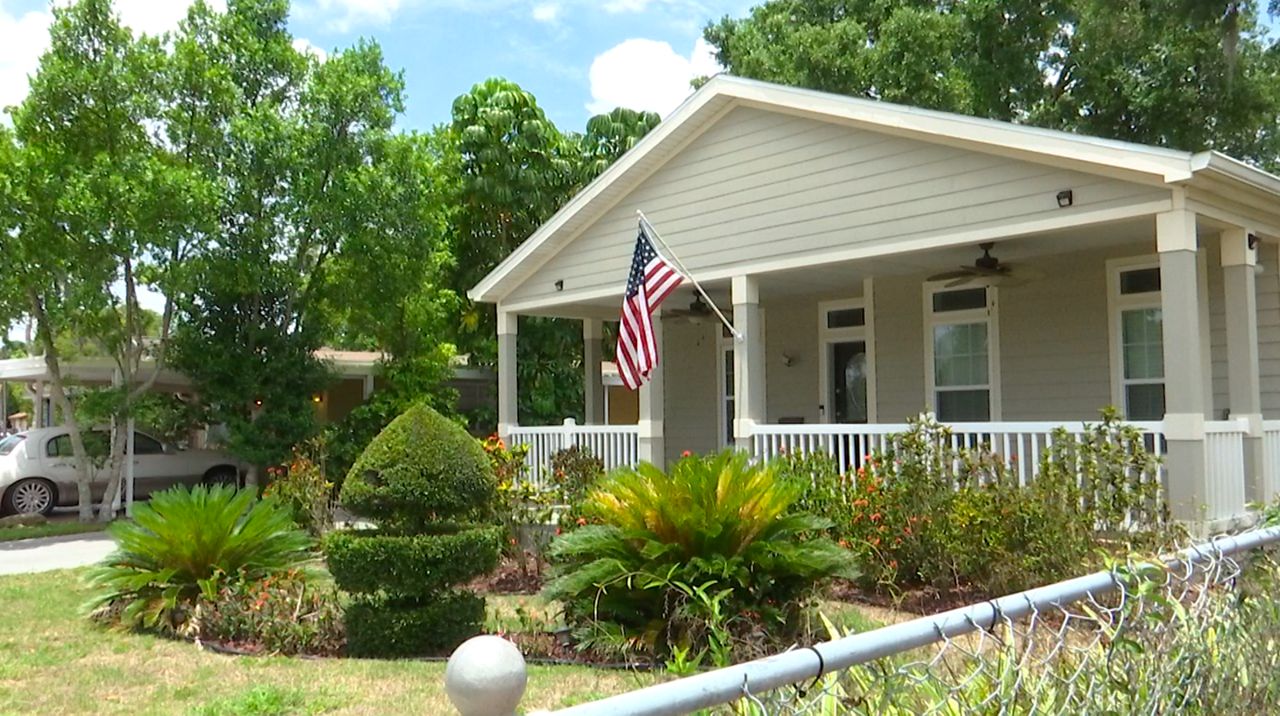 Homes in the Hannibal Square Community Land Trust are not sold at market rate. Rather, homeowners pay a reduced price that doesn't include the land beneath the home. (Spectrum News 13/Molly Duerig)

ORANGE COUNTY, Fla. — June is National Homeownership Month, and some are taking the opportunity to focus on the homeownership disparity that still persists between white and Black families in the U.S.

Approximately 76% of white households own their home, compared with just under 48% of Black households, per a new report from the Florida Housing Coalition.

Back in 1970, two years after the Fair Housing Act passed, just under 42% of Black Americans owned their homes. That means in forty years, the national Black homeownership rate has only slightly increased.

In Winter Park, the Hannibal Square Community Land Trust provides one pathway to affordable homeownership for people who may not be in a position to purchase a market rate home.

Community land trusts, or CLTs, are nonprofit organizations that own the land beneath a home, removing the cost of land and lowering the purchase price for potential buyers.

Homeowners with Hannibal Square CLT sign 99-year ground leases for the land beneath their homes, allowing them to do what they wish with the land. If a CLT homeowner chooses to eventually sell their home, they can — but not at market rate. A resale formula determines the maximum limit the home can be sold for.

“We make sure that there’s another buyer that comes in, who is in the low to moderate income range, that can buy a new home,” said Camille Reynolds Lewis, executive director of Hannibal Square CLT.

While not a perfect choice for everybody, Reynolds Lewis says a community land trustc an be a “stepping stone” for some low- to moderate-income families to build wealth.

“If you’re moving from the rent rolls and you can’t afford a market rate home, even with some of the down payment assistance programs that may be available through local governments, you could move into a community land trust home,” Reynolds Lewis said.

She points out that many of those government subsidy programs that help someone buy a home more affordably won’t transfer onto the next buyer after the house is sold. But with a CLT home, subsidies are packaged into the unit and passed onto the next buyer, creating what Reynolds Lewis calls “permanent affordability.”

Some CLT homeowners do move on to purchase market rate homes. Others, like Julie Jones, plan to pass the CLT home onto their children.

Jones, 62, said she bought her home from the Hannibal Square CLT sixteen years ago. Although she spent most of her childhood in Winter Park, her family always rented.

“The prices were too high,” Jones said.

So when a friend approached her about the CLT option, Jones leapt at the chance. She’d already grown tired of living in rental apartments at that point.

“You’re spending too much money and not investing in anything that’s gonna be good for the long haul,” Jones said of renting.

Now, Jones loves the stability and flexibility of being a homeowner.

Her nieces say Jones’s home is like a “revolving door” of relatives coming to stay. But for Jones, that’s the best part: She loves having space to host family in her three-bedroom, two-bathroom house. Right now, her nephew lives with her while he hunts for jobs in a new career field.

That sense of altruism extends to Jones’s neighbors and their kids. Those kids are mostly grown-up now, Jones said, but throughout their childhood Jones would keep track of their birthdays and bake them cookies, brownies or cupcakes — whichever they prefered.

“I think that’s how neighbors should be,” Jones said.

Looking to the future

One common criticism of CLTs is the maximum resale cap, which limits how much a homeowner can sell their house for.

In a recent call about the racial homeownership gap hosted by the Florida Housing Coalition’s Center for Racial Equity, Chief Programs Officer and Technical Advisor Ashon Nesbitt weighed in on this critique.

“You have a population that's largely been shut out for a lot of years from homeownership. Then to open it back up, and we know what happened in the 90s and early 2000s, those same communities were targeted with subprime (mortgage) products,” Nesbitt said. “Whatever gains they had made were lost.”

Like Reynolds Lewis, Nesbitt acknowledges CLTs are not a one-size-fits-all solution. But they can help diversify and stabilize the housing landscape by making homeownership accessible to a wider range of people.

“We’ve found that most of the people who are looking for homes, they meet the credit requirements," Reynolds Lewis said. "They just don’t have the income or the cash to meet the market rate homes today.”

CLT homes have lower rates of delinquency and foreclosure than homes with conventional mortgages, according to the Grounded Solutions Network.

Friday evening at 7 p.m. Hannibal Square Community Land Trust will host a virtual Juneteenth celebration, commemorating the anniversary of when the last Black slaves in America learned they were free. You can register for the event, “African American Communities and Gentrification: Heritage & Affordability,” on the group's website.