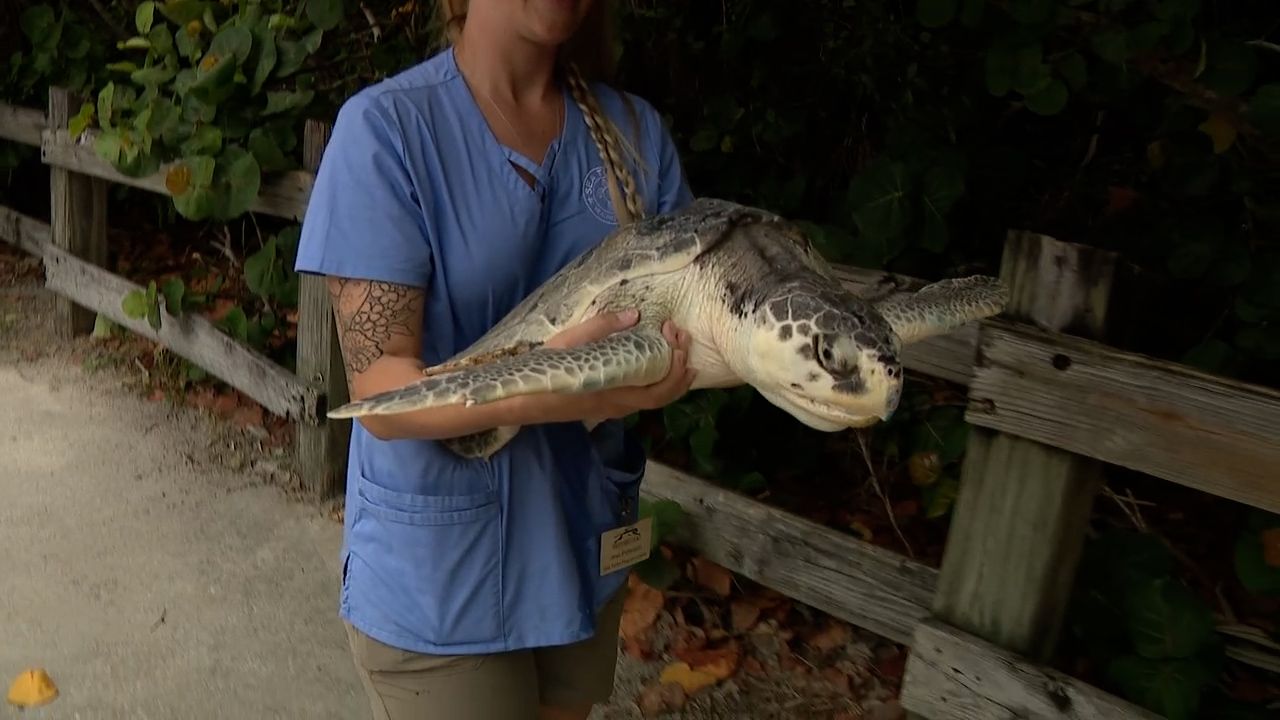 "Wandering Wylie" was released back into the wild Wednesday. (Spectrum News 13)

BREVARD COUNTY, Fla. — After more than a year of private releases due to the pandemic, the Brevard Zoo was able to return to publicly releasing rehabilitated sea turtles.

The well-attended event marked part of the zoo’s celebration of World Sea Turtle Day on Wednesday.

“To be able to watch an animal be released back into the ocean, it sparks something in people, and when we can’t do that, it’s really hard to get people to want to help out more,” said Jess Patterson, the sea turtle program coordinator at Brevard Zoo.

The turtle who returned to freedom was named Wandering Wylie and Patterson said it was named after a close friend of zoo director, Keith Winsten, who passed away shortly before the animal arrived at the zoo.

Wylie was brought to them by the Sea Turtle Preservation Society (STPS) on March 11. Some beachgoers found Wylie on the shores of Cocoa Beach and brought it to the attention of the Florida Fish and Wildlife Conservation Commission (FWC) which, in turn, made sure that STPS got it into safe hands.

Patterson said Wylie had some blood glucose issues and was showing some wounds around the edge of its shell that needed topical care and cleaning.

Wylie is a sub-adult, Kemp’s ridley sea turtle, an endangered species. According to the National Oceanic and Atmospheric Administration (NOAA), after being quite abundant prior to the mid-20th century, the species started seeing a steep decline, hitting a record low of only 702 nests in 1985, “representing fewer than 250 nesting females.”

NOAA noted that number increased steadily through 2009, but has been in flux ever since.

Patterson said seeing a Kemp's ridley reach their lab is very unusual. She said Wylie is only the second one they’ve ever treated, with the first coming to their facility back in 2017.

Another unusual thing, Patterson said, is they’ve seen about five Kemp’s ridley nests along the Space Coast this year, which is far more than normal.

“We don’t know 100% why the Kemp’s ridleys are nesting off here. You could suspect that it is because of global warming,” Patterson said. “Their nesting ranges, temperature-wise, is broadening.”

Wednesday was a welcome return to the tradition of publicizing and sharing the release of sea turtles with the public. Winsten said it’s an important benchmark of where we are in the pandemic.

“Last year was a really busy sea turtle year, but we had to do it during a pandemic. So first of all, for much of the year, we didn’t have our sea turtle volunteers that are critical to us,” Winsten said. “And then we got those folks back, but we had to do it in a safe way. So, every time we released sea turtles, it was a private affair, so to speak. We didn’t publicize it.”

Winsten noted that not only is sharing these events with the public fun and educational for kids, it also continues an important relationship with the residents of the Space Coast.

“We’re one of a series of sea turtle rehab facilities, but we’re the only one here in Brevard County," he added. "And so people here need to know it’s working, the dollars they give us, the support they give us translates back into sea turtles going home, as we call it.”

The return of Wylie to the wild wasn’t the only way Brevard Zoo helped celebrate World Sea Turtle Day. It also opened up the first part of a new educational sea turtle exhibit.

The newest part of the zoo was created in partnership with Northrup Grumman’s Project Turtle Tech. The program was designed to “develop, test and build a technology system that helps solve sea turtle conservation challenges in Brevard County.”

Northrop Grumman delved into this area of engineering back in 2018. Roddey Smith, the chief engineer with Turtle Tech, discussed on Wednesday a pair of drones designed to use artificial intelligence learning to be able to spot and identify sea turtles out in the surf and relay data back to researchers in real time.

The company partnered with a number of educational institutions like the University of Central Florida and Embry-Riddle Aeronautical University on the technology that is now being displayed in an educational format at the Brevard Zoo.

“We’re able to take the technology that we work on every day and then we can translate that into something that researchers can use, and actually afford to use, and start learning things that they’ve never been able to learn before,” Smith said.

The drones are designed to be able to fly over the ocean for several hours at a time and collect a large amount of data in each flight.

“There’s a lot of concern about conservation and maintaining our environment. And so, this is a natural way for (our young engineers) to reach out and make a difference,” Smith said.

The newest section of the Brevard Zoo is now open to the public.