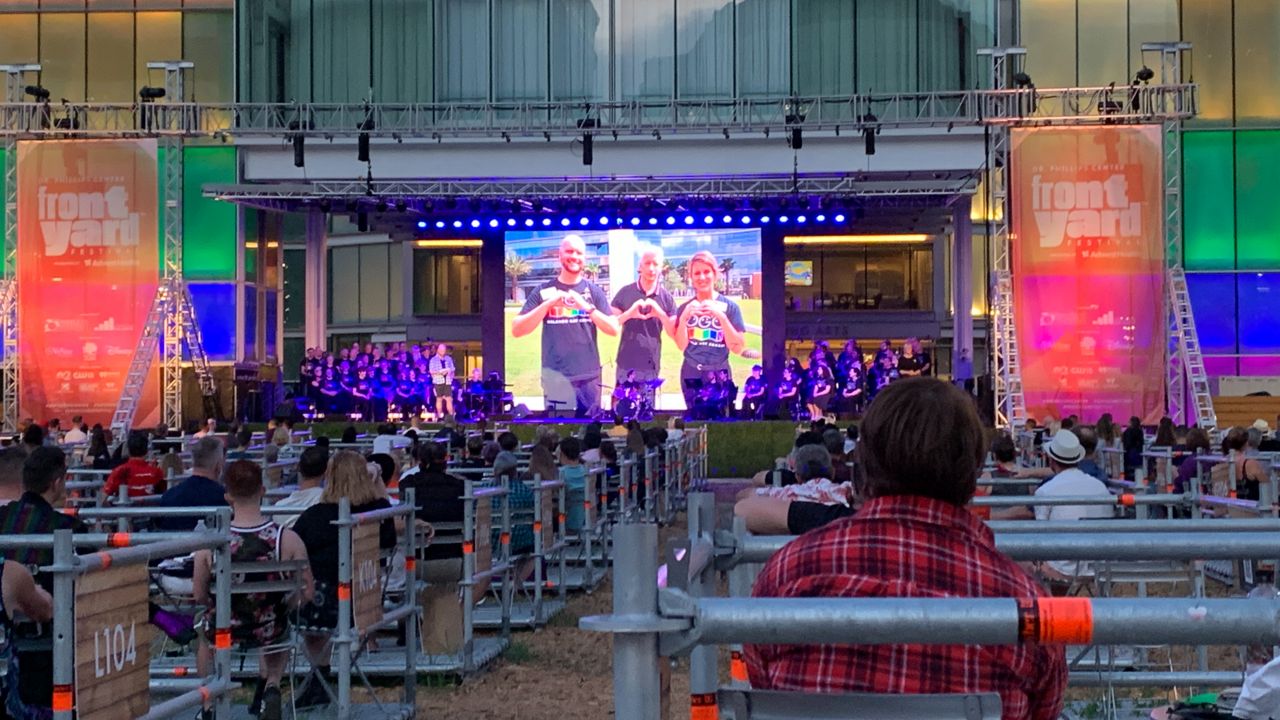 People gather to watch a series of images, telling the story of Pulse. (Spectrum News/Emily Braun)

ORLANDO, Fla. — As we approach the five-year anniversary of the Pulse massacre, people in Orlando are reflecting on how much healing and support have continued to grow since the shooting.

On this milestone, the OnePulse Foundation leaders — committed to keeping the memory of the victims alive and furthering those in the LGBTQ community — are also looking back on how far they’ve come.

A large screen mounted on the stage at the FrontYard Festival plays portrait after portrait, painting a picture of the full story of Pulse.

People watch and reflect as the images shift from pain and hurt to hope and healing to lasting love and support.

As the images play on the screen, Barbara Poma, CEO of the OnePulse Foundation, thinks back to the humble beginnings of the organization born from this tragedy but committed to stopping hate from winning.

Five years later, Poma says she wants the message to dig even deeper.

“The question really began of ‘how.’ How are you going to not let hate win? And so we came up with this concept of outloving it, and just winning by loving," Poma said.

The foundation is made up of a lot of love, but also four pillars: the memorial, the museum (soon to come), education and scholarship.

The last of those, Andrew Fontaine was lucky enough to experience personally he says.

“It was an honor just to be able to apply for the scholarship because I really admire what they’re doing, and I wanted to be a part of that," said Fontaine. "So it was a huge deal for me to get that scholarship.”

His scholarship represents the memory of one of the 49 victims of the Pulse massacre, Rodolfo Ayala Ayala, who worked in a blood center just as Fontaine does now.

“They (the scholarships) truly embody and reflect the legacy of the angels, and that’s exactly what it was meant to do," said Poma. "Each one of them has an assigned career or aspiration of the angel that the families designated.”

Fontaine says he feels grateful his little family — him, his partner Josh and their dog Oliver — found its place in Orlando.

That place, he says, is further nurtured by the OnePulse Foundation, and indeed it’s this foundation that continues to drive his work today.

The OnePulse Foundation says itsgrowth over the years has been little by little, day by day.

It has been able to add more and more money to the scholarship program while also adding more elements to the educational programs. It says the museum will be a big milestone to reflect the foundation’s growth as well.